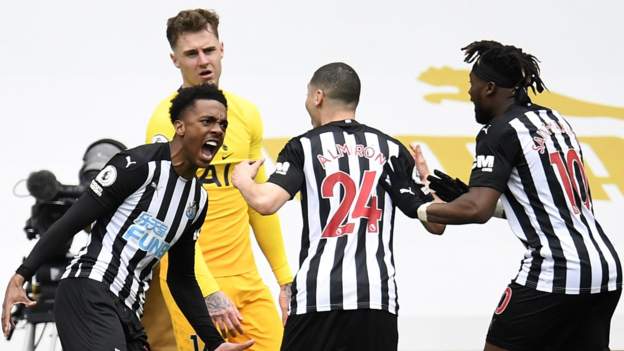 Newcastle earned a vital point in their fight for Premier League survival thanks to a late equaliser against Tottenham from on-loan Arsenal midfielder Joe Willock at St James’ Park.

The 21-year-old reacted quickest, after Miguel Almiron’s effort was cleared off the line, to fire into the roof of the net and deny Spurs a place in the top four for the first time since 2 January.

In an entertaining game Newcastle took the lead when Joelinton slotted home a lovely threaded pass from Sean Longstaff after Spurs were guilty of overplaying at the back.

Jose Mourinho’s side responded within 90 seconds as the hosts, and in particular Emil Krafth, failed to clear in the area, and an alert Kane prodded home for his 18th goal of the campaign.

The visitors were leading four minutes later when Kane, fed by a brilliant reverse pass from Tanguy Ndombele, clinically fired across Martin Dubravka from the right-hand corner of the penalty area.

The 27-year-old almost got a third, moments before Willock’s goal, but his effort cannoned into the base of the post and behind.

Newcastle – who have now only won two of their past 19 Premier League games – remain 17th, but move three points clear of Fulham who occupy the final relegation spot. The Cottagers would climb out of the bottom three on goal difference if they beat Aston Villa at 16:30 BST.

Tottenham, who conceded a 97th-minute equaliser against Newcastle earlier in the season, move up to fifth – above Liverpool and West Ham – but remain two points behind Chelsea who are in the final Champions League spot.

Joelinton stands up for Bruce

In their final game before the international break Newcastle were well below par in a 3-0 defeat at Brighton, and Bruce would have have spent much of the break wondering about his future, with 95% of fans in a local newspaper poll calling for him to be sacked.

READ  When was the last all-English Champions League final?

However, the former Birmingham and Hull boss will be happy with the desire and application shown by his side.

They made five changes from that defeat – with Matt Ritchie, Jacob Murphy and Longstaff all making their first starts since January – and started positively with Joelinton having an effort saved from distance, before Hugo Lloris made a brilliant double save to deny Dwight Gayle.

They pressed high throughout the first period, and got their rewards when sloppy Tottenham passing and a weak Pierre-Emile Hojbjerg tackle saw the ball break free for Longstaff who stayed calm to find Joelinton, who passed into the bottom corner for just his second league goal of the season.

Newcastle were suspect defensively throughout, and Bruce will be fuming with the soft nature of the first goal, where Krafth should have just cleared for a corner rather than trying to play in his own six-yard box.

They had chances to equalise earlier with Joelinton firing wide with a volley, but the striker, who now has four league goals since his £40m transfer in July 2019, did well to nod down for the equaliser with Willock adjusting his feet well to fire into the roof of the net.

The point could prove crucial with West Ham, Liverpool, Arsenal, Leicester and Manchester City still to play in their final eight games.