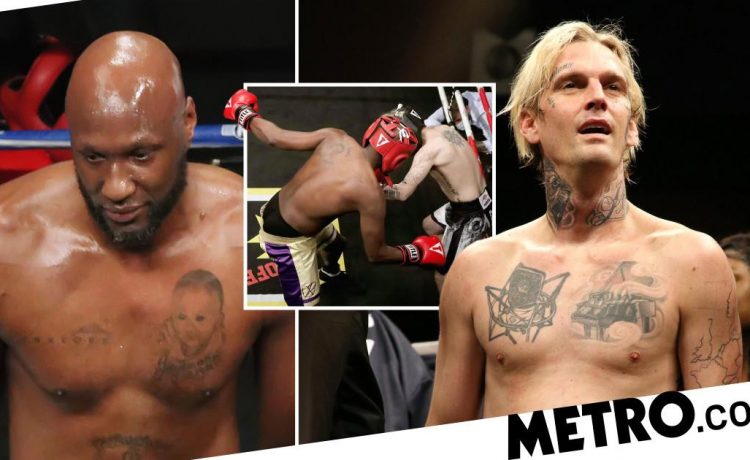 The latest in an increasingly bizarre string of celebrity boxing matches saw former basketball star Lamar, 41, and former popstar Aaron, 31, trade blows in the ring at the Showboat hotel in Atlantic City.

Fans of 90s pop and love triangles (remember the Aaron – Hilary Duff – Lindsay Lohan drama?) may have been cheering for Aaron, but at 6ft to Lamar’s 6’10, it was no real surprise that the singer went down in the second round.

Although Aaron got in plenty of blows in the opening round, Lamar’s power was too much for him, and the Lakers champion knocked his opponent to the ground in the second round.

Prior to the match, Aaron – the younger brother of Backstreet Boys star Nick Carter – talked big, saying: ‘I grew up street fighting, and I’m really looking forward to this match. But my dad always said, “The bigger they are, the harder they fall.” So, Lamar, I’ll see you there, bro.’

However, there was no bad blood, as Aaron and Lamar hugged it out after the knockout, with Lamar saying he’d be up for another celeb fight if the price was right.

Former MMA star Chuck Liddell acted as guest referee, with Ice T and Coco on the mic providing guest commentary, so the whole thing was hardly a serious heavyweight event.

However, the person behind Celebrity Boxing plans on making these brawls between stars into a major franchise.

‘Boxing is in a weird spot. There are no fighters to follow right now. Celebrities are looking at this as a way to get back in the spotlight and a way to get money.’

While celeb fights did happen in the 90s and noughties, they have come back into fashion with YouTubers Logan and Jake Paul and their fights against other internet stars.

The craze hit fever pitch when Logan took on KSI back in 2018, and the vlogger most recently took on Floyd Mayweather in the ring.

Meanwhile, Lamar has recently opened up on how he uses ketamine in controlled situations to treat his addiction issues, as part of the documentary Lamar Odom Reborn.


MORE : Strictly’s Shirley Ballas was bedbound during horrific battle with Covid: ‘I didn’t know my own name’


MORE : Jennifer Lopez and Ben Affleck doing the least to shut down Bennifer reunion rumours as they wear same clothes