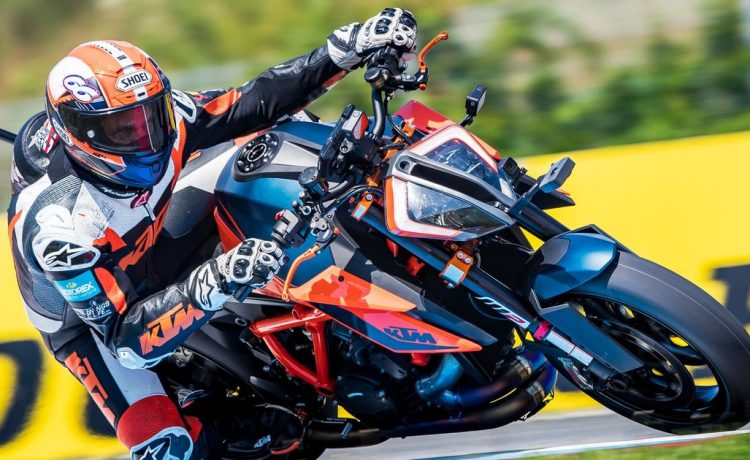 In a rational world, a bike like this wouldn’t exist. But then, neither would love, poetry or Italy.

For a start, it’s got more power than 100% of riders will use on the road, and 99% on track. It’s faster than the wind, but with no wind protection. And there’s no place for luggage for longer than a day trip.

Still, if God had wanted life to be normal, he wouldn’t have invented Donald Trump, and although it was completely pointless and impractical, I loved it. The bike, that is, not Donald.

Climb aboard, and at first the controls on the left bar look complicated, although that word has to be taken into perspective bearing in mind the 14 buttons on the left bar of the Honda Africa Twin I had for a while earlier in the year.

On the KTM, though, it looks complex, but isn’t: a four-way joystick introduces you to 486,000 menus and sub-menus, but for simple souls, a two-way switch on the right bar toggles between the various rider modes of Track, Sport, Street and Rain, and controls the three-level heated grips.

You can check how you’ve made a complete mess of this by checking the splendidly clear TFT screen, the appearance of which with menu number 467,382 you can make more or less complicated.

That done, you can then admire the useful mirrors and, most of all, the typically perfect KTM riding position – upright and neutral enough to prove that you don’t need to be crippled by sportsbikes to go fast, but tipping you forward slightly to let you grip the tank lightly with your knees, rest your pinkies equally lightly on the wide bars, and prepare to fling yourself into corners.

And fling you do – with trademark KTM smallish wheelbase, perfect weight distribution and steepish fork rake, before you know it you’re stitching together an exquisite tapestry of bends with a grin on your face.

Acceleration, as you’d expect with 180bhp propelling 209kg of bike, is hilariously fast, accompanied by one of the greatest sounds in the motorcycling symphony, the visceral snarl of a big V-twin.

With more grunt than Seamus Murphy’s pig farm just outside Ballygobackwards, you can stay in third or fourth all the way from twisties to sweeping A-roads, snicking between them with a quickshifter which is as slick going up the box as down. You can also turn it off, although I haven’t a clue why you’d want to, but if you insist, it’s menu number 256,574.

Overtaking in the same gears is such a point and shoot affair that I ended up laughing in my helmet. Just don’t tell anyone in case they think I’m a bit weird.

The suspension’s firm, but it suits the taut, muscular nature of the bike, and it only caught me out once, when on a particularly frisky stretch of road, it bounced my left foot off the peg.

Up to now I’d been proceeding in Street mode on damp roads, but with conditions drying out, it was time for Sport, and if I’d thought progress was hilarious in Street, it now became plain ludicrous.

So if you’ve got 15 grand to spare and are on the lookout for the most fun toy since your Action Man Red Devil outfit, look no further.

Get £30 off your insurance here: MotorcycleDirect.co.uk