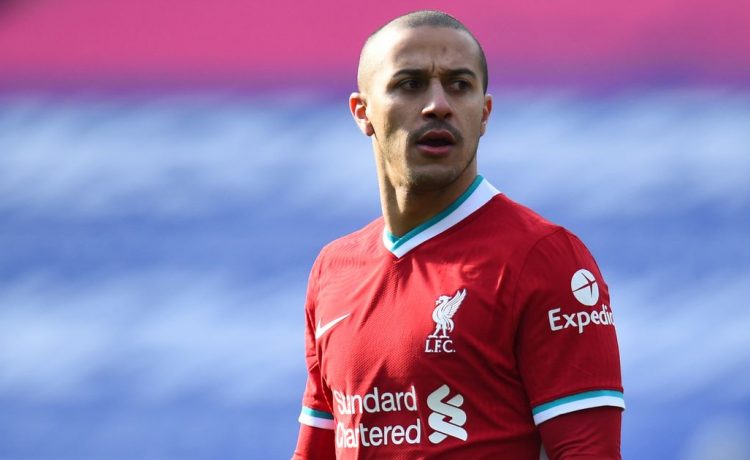 Jurgen Klopp has gone some way to explain Thiago Alcantara’s poor form this season in the Premier League.

The Spaniard arrived from Bayern Munich last summer with a huge reputation.

He had just helped the German win the Champions League and was named in the FIFPro World XI.

But injuries and coronavirus kept him from stamping an immediate impact on the squad and he appears leggy.

The 29-year-old has struggled to keep up with Klopp’s gegenpressing tactics while Liverpool’s form has hit crisis level over the past few months.

According to the Athletic, Thiago has been left exposed by the lack of a holding midfielder next to him.

Compared to another summer signing in Diogo Jota, the former Bayern Munich star has struggled.

The Portugal international, on the other hand, hit the ground running before an injury ruled him out for 10 weeks.

And Klopp explained how it is easier for attacking players to flourish in his sytem.

He said: “To find the fit properly to the maximum extent takes time as well but you can throw in a striker or an offensive player [earlier] because a lot of these things are natural skills.

“If you want to involve them in all the pedals, offensively, then it takes a little bit longer.

“But as long as you accept that it will not be the case from the beginning then you can play an offensive player earlier, that is true.

“Defending is much more intense work. You have to invest more work to make a team defend.

“If you want to attack properly it takes a lot of work as well, but to attack to just dribble the ball up front, shoot and score a goal that can work of course. But it helps to have time.”