Kittens given oxygen masks after being rescued from kitchen fire 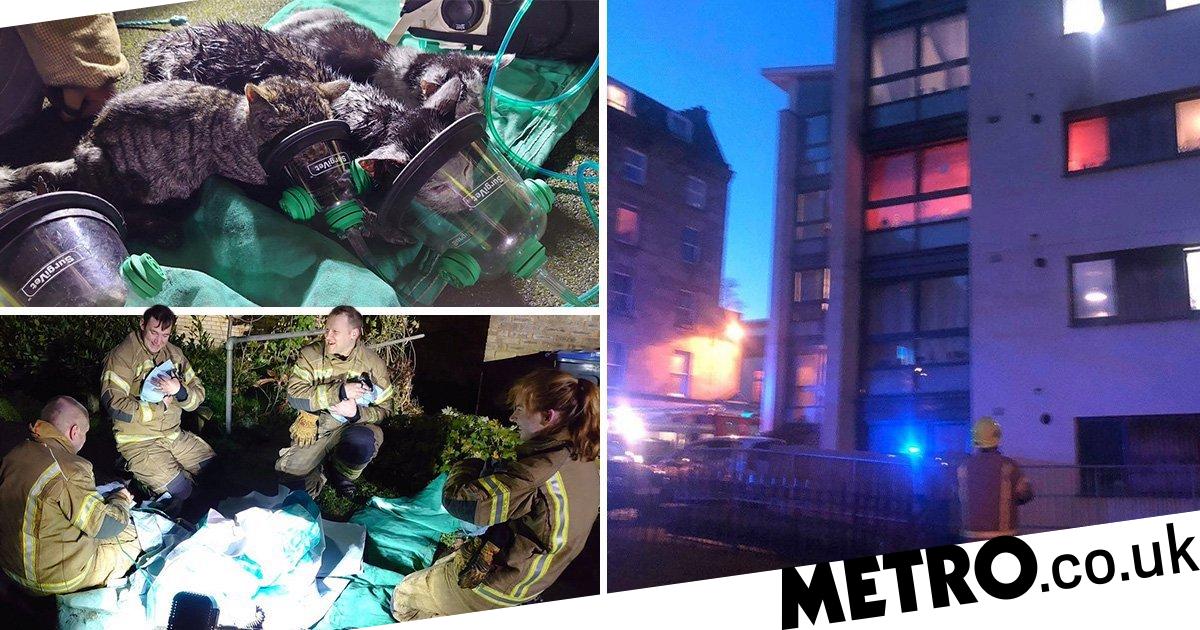 Four kittens were saved from the brink of death after firefighters rushed them from a smoke filled kitchen last night.

They were pictured recovering with oxygen masks specially designed for pets after an over-heated incense burner caused a blaze at their Birmingham home.

After having some time to rest they were petted by their rescuers who then handed them over to the care of the RSPCA.

An electrical blaze initially thought to have started from Christmas tree lights ravaged the home at around 7.45am.

Supporter worker Shannon Johnston urged her neighbours to tell the firefighters her two-year-old cat Nala was still inside.

The kitchen an living room were completely destroyed, while the rest of the flat, owned by Port of Leith Housing Association, was badly smoke-damaged.

Nala was discovered unconscious and was not breathing – but dedicated firefighters successfully battled to save her life.

Watch commander Robbie Higgins said the cat got back on its feet, ‘albeit groggy and confused’, after oxygen was administered.

Shannon, 20, called it a ‘miracle’ and said she believes her late father Kevin was watching over the family since passing away three years ago.

She said: ‘The work that he did, you just wouldn’t think you’d be able to resuscitate a cat.

‘The vet said she’s fine, we are keeping an eye on her but she’s not showing any signs. She’s just totally fine.’

Shannon had left for work about an hour before getting a call from a neighbour at 7.45am.

In a strange twist of fate, Shannon’s mum Ruth Geraghty, 40, had closed the living room door which would normally be left open to allow Nala free reign of the flat.

Firefighters told the family it had saved the rest of their home of seven years from destroyed.

Shannon added: ‘Everyone says Dad was looking out for us.

‘He died three years ago in January. I think he’s looking out for us and making sure we’re safe.’

Luckily Shannon’s best pal has given her a place to stay along with her mum and 18-year-old sister Jasmine.

The fire may have ravaged a large chunk of their home, but right now the family are counting their blessings.

Shannon added: ‘It’s just bricks and mortar and things that can be replaced over time – the main thing is that we weren’t in, and they managed to save Nala.

‘One of our neighbours was in tears when he saw Nala clinging on to me, wrapped in a little blanket.

‘My neighbour who was watching Nala being resuscitated said you could see how much the firefighter wanted to save her, the relief in his eyes was so genuine.’

The family have now been offered temporary accommodation by Leith Housing Association while repairs are being carried out over the Christmas period.

A fundraising page set up to help the trio get back on their feet has raised more than £1,000 so far.

Shannon added: ‘Obviously it has been really stressful and manic but we are trying to stay positive.

‘I’m going to go down to the fire station and take them some chocolates.

‘The living room and kitchen are a complete goner and all the Christmas stuff was destroyed.’

Since investigating the blaze firefighters now think the fire was caused by a faulty electrical plug.