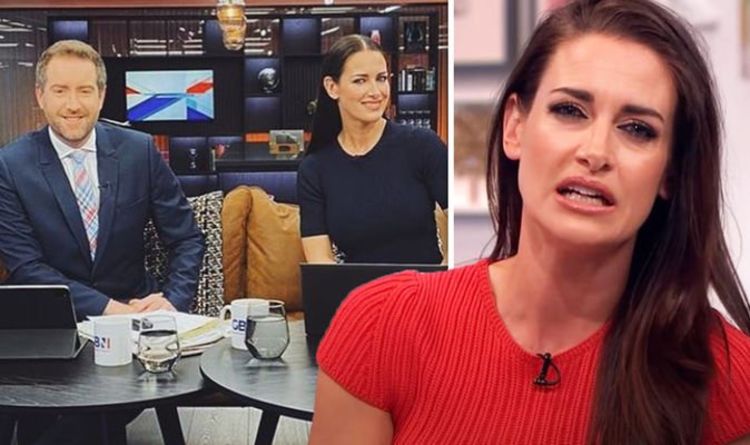 Former Sky Sports presenter Kirsty Gallacher, 45, has responded to claims of “poor” picture and production quality on GB News. The newsreader promptly replied to a viewer of the show who had been left less than impressed by apparent technical difficulties, which they claim make the programme almost unwatchable.

Tweeting to her 430,800 followers, she wrote: “Just finished presenting the Great British Breakfast @GBNEWS with the amazing @TheRealKirstyG.”

Despite the majority of comments being supportive, one viewer claimed that the production problems the show faced made it almost unwatchable.

They wrote: “I desperately want to enjoy it… but the picture and production quality is so poor… it feels like I’m back in the 80’s…”

Hitting back, another viewer advised them to “close their eyes” and listen to the presenters.

They wrote: “Close your eyes and just listen then. The content is more important, and that’s great.”

Clearly pleased with the praise, Kirsty commented and promised that the technical problems will be sorted soon.

“Well said thank you! Those things will be ironed out ASAP,” she said.

“Great discussions and debates. I think I prefer the format of two presenters, three can get a bit intense. Great to have loads of guests to enhance debates. Well done,” they added.

Applauding the duo, another social media user commented: “You are a great team ladies, I so enjoy your refreshing honesty.”

As another penned: “Very refreshing to have a balanced view of the news.”

However, earlier today frustrated viewers took to social media to brand the new news channel as “no different to the BBC”.