She is one of the most successful actresses in the UK, but Jodie Comer has no plans to ditch her native Liverpool for a glamorous mansion in London or Hollywood 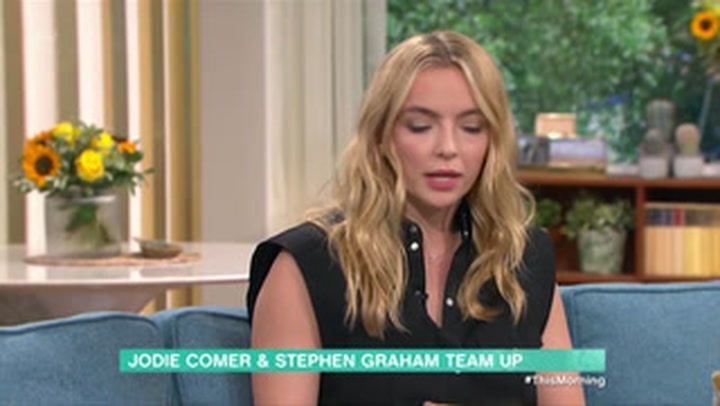 Jodie Comer talks about what it’s like changing accents

Jodie Comer still lives with her parents in the Liverpool suburbs – but has revealed she doesn’t have “a single bed and Winnie the Pooh wallpaper”.

The 28-year-old actress is best known for playing Villanelle in Killing Eve, but has recently impressed and moved viewers with her new care home drama, Help.

In the show she plays a carer looking after a man with complex special needs, played by Stephen Graham.

It’s set during the peak of last year’s coronavirus lockdown, and is described as a harrowing look at how the nation’s front line heroes battled the killer virus.

Do you wish that you still lived at home with your parents? Tell us in the comments below!

The show has got people wondering what Jodie’s lockdown experience was like, and according to an interview she did with The Times last year, it was very pleasant.

She lives with mum Donna, dad Jimmy, and younger brother Charlie at her childhood home in Childwall, south of Liverpool, and fans got to see them celebrating with a BBQ after the BAFTAs, where she also made a video call from the family home for an appearance as a nominee.

She told the paper: “I’d live with my mum and dad till I was old and grey if I could.

“(But) I’m definitely looking to move out. I recognise I need my own space and independence. I just don’t want to do it.”

Like a lot of young people who opted to go back to the family nest for the uncertain months where the country was shut down, Jodie found it offered a brilliant chance to have a clear out.

The gorgeous star is also close to her younger brother
(

She said: “As much as I’d want to definitely be carrying on with (work), I’ve actually been able to come home, unpack like seven suitcases because I haven’t been here, and I’ve thrown out so much rubbish.

“And, actually, to have a bit of stillness, and be stationary, I’m actually really kind of… I’m a bit embarrassed to say I’m kind of enjoying it.”

Jodie added that her family had made the most of the slower way of life.

She said they had been “watching a long list of movies”, eating Revels for breakfast, crisp sandwiches for lunch and singing “Fergalicious”.

One bonus of being at home would have been how easy it would be to enjoy her mum’s cooking.

In February 2020 she revealed on Instagram that her mum had sent her a Sunday roast to eat during a break from filming.

She captioned it: “All the emotions… Nothing gets in the way of me and my mums roast, not even Sunday’s on set. I love you mum… and Brian for the safe delivery. #jammycow.”