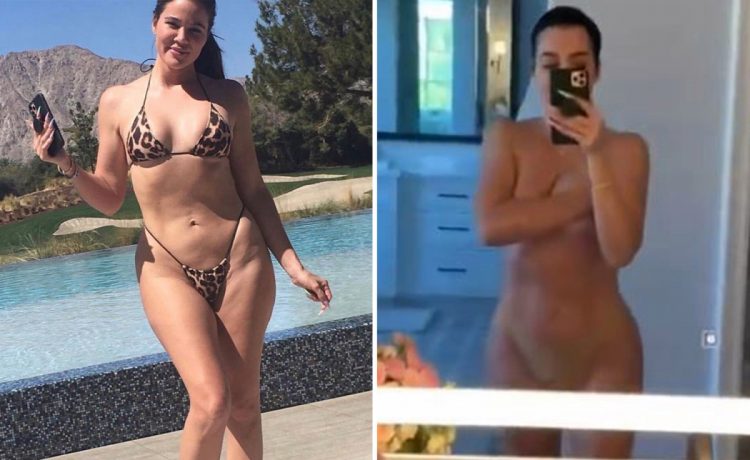 KHLOE Kardashian clapped back at her unedited bikini photo going viral this week with topless videos showing her toned figure.

The Keeping Up With The Kardashian sister also penned an emotional message in which she calls the loud social media response to her leaked snap “unbearable.”

After days of online chatter over the stark contrast between her typical photos and the recently leaked snap, Khloe, 36, broke her silence.

The Good American founder shared several clips to Instagram on Wednesday night that nearly bared all as she wore only a pair of nude underwear.

She covered up her chest with her arm as she filmed the mirror selfie video in the bathroom of her Calabasas mansion.

Her stomach flaunted muscular abs as she turned around and even jumped up and down to give her followers a glimpse into various angles.

The mom-of-one also shared a live video of her working out at her home gym which put her curves on full display.

“Yes I did a live to show you all this isn’t photoshopped,” she quipped in the caption.

Her Instagram also included a lengthy statement, where she wrote: “Hey guys, this is me and my body unretouched and unfiltered.

“The photo that was posted this week is beautiful. But as someone who has struggled with body image her whole life…

“When someone takes a photo of you that isn’t flattering in bad lighting or doesn’t capture your body the way it is after working so hard to get it to this point.

“And then shares it to the world – you should have every right to ask for it to not be shared – regardless of who you are.”

She then got honest about the impact online chatter has had on her: “In truth, the pressure, constant ridicule and judgement my entire life to be perfect and to meet other’s standards of how I should look has been too much to bear.”

The reality star then went on to quote several harsh comments she has received over the years: “Khloe’s the fat sister. Khloe’s the ugly sister.

“Her dad must not be her real dad because she looks so different. The only way she could have lost weight must have been from surgery. Should I go on?”

Khloe then explained: “Oh but who cares how she feels because she grew up in a life of privilege. She’s also on a reality show so she signed up for all of this.

“I’m of course not asking for sympathy but I am asking to be acknowledged for being human.

“I am not perfect but I promise you that I try everyday to live my life as honestly as possible and with empathy and kindness.

“It doesn’t mean I have not made mistakes. But I’m not going to lie, It’s almost unbearable trying to live up to the impossible standard that the public have all set for me.

“For over a decade now in photos, every single flaw and imperfection has been micro-analyzed and made fun of to the smallest detail and I am reminded of them everyday by the world.”

She concluded by saying that she “never got used” to being told “how unattractive one is” and admitted that if one “hears anything enough” they “start to believe it.”

“I love a good filter, good lighting and an edit here and there. The same way I throw on some make-up, get my nails done or wear a pair of heels to present myself to the world the way I want to be seen and it’s exactly what I will continue to do unapologetically.

“My body, my image and how I choose to look and what I want to share is my choice. It’s not for anyone to decide or judge what is acceptable or not anymore.”

Since earlier this week, The Kardashians’ crisis management team has desperately attempted to completely remove the leaked snap of Khloe from the internet – even sending out “legal threats” to take down the bikini shot.

Fans have slammed the Good American founder’s efforts to scrape the photo from the internet as she typically boasts body positivity and acceptance.

On Monday, a source close to the famous family exclusively told The Sun that Khloe “completely lost it” and wanted it taken down “as soon as possible” when the post was shared.

“She was freaking out and within minutes the photo already began circulating everywhere,” the source said.

The informant alleged that Khloe became emotional and “embarrassed” as she “knew this was going to be a big deal.”

“But the positive comments have genuinely seemed to help,” the source added.

Though many fans appeared shocked by the rare unedited glimpse at the Kardashian sister, a lot gushed how “beautiful” Khloe looked “naturally” and insisted she “doesn’t need photoshop” to look good.