Khloe Kardashian and Tristan Thompson have reportedly split again just weeks after their relationship was plagued by further cheating allegations.

The estranged couple, who began dating in 2016, are said to have ended their romance three weeks ago. It came after Boston Celtics player Tristan slammed claims he cheated on Khloe with model Sydney Chase.

According to Page Six, the pair have called it quits again but are remaining on good terms for the sake of their three-year-old daughter True.

A source told the publication: ‘They’re getting along. There is no drama. Everything is amicable and they are on the same page with co-parenting.’

TMZ also claimed to have been told of the split by insiders and report that Tristan spent Father’s Day with True on Sunday, while Us Weekly also confirmed the split. Noticeably, Khloe did not publicly post a Father’s Day message to either Tristan, her late father Robert Kardashian or stepfather Caitlyn Jenner.

Khloe, 36, and Tristan, 30, were seen together just last week out and about with True in Los Angeles.

Hours before news of their split broke, Khloe opened up about their reconciliation in the Keeping Up With The Kardashians reunion special to celebrate the end of the reality series.

She told host Andy Cohen: ‘We just really, really became genuine great friends with one another [in lockdown]. It just was this natural progression. I’m not saying that’s what I would encourage other people to do, it’s just what naturally happened with him and I.’

When asked if she trusts him after his past cheating, Khloe replied: ‘I mean, I definitely trust him as a friend and all those things… What I need to find out, everything comes my way. I just need to trust and focus on today and go day by day. I can’t worry too much about everything else.’

Khloe also confirmed she wanted to have another child with Tristan and was hoping to use a surrogate.

In May, Tristan was linked to model Sydney, who alleged they had slept together during an appearance on the No Jumper podcast. She also claimed to have texts from the athlete and made comments about his manhood.

Tristan’s lawyer, Martin Singer, was reported to have sent her a cease and desist over the allegations – something she then denied.

In the letter, obtained by the publication, the attorney branded her claims ‘malicious defamatory fabrications’, stating they had ‘no relationship whatsoever’ and no such texts were exchanged.

TMZ stated that the filing concluded with the lawyer warning that if Sydney didn’t stop ‘defaming’ Tristan, ‘you do so at your peril since you may find yourself in court attempting to defend your indefensible misconduct’.

Metro.co.uk has reached out to Khloe and Tristan’s reps for comment. 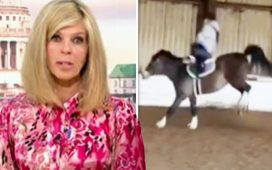