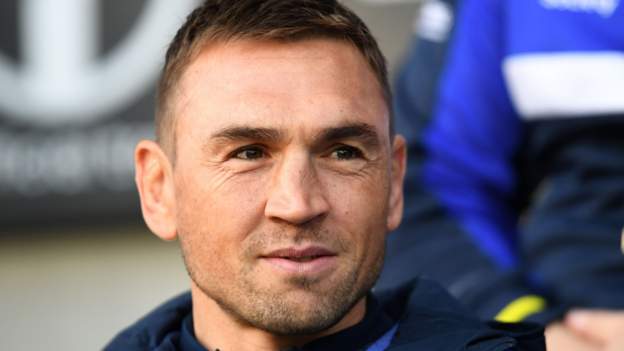 Leicester Tigers have appointed Kevin Sinfield as defence coach after he announced he will leave Super League side Leeds Rhinos in the autumn.

The ex-England rugby league captain, 40, is director of rugby at the Rhinos.

Sinfield will replace Mike Ford, who will leave the Tigers this summer.

“It is a big challenge, but one that I know I am ready for and I am looking forward to joining the club at this stage on its journey and getting to work in Leicester,” Sinfield said.

“I am really looking forward to this new opportunity in my career and the chance to work with Steve Borthwick, his coaching team and the playing group he is building.”

He was awarded an OBE in the Queen’s Birthday Honours for fund-raising and services to rugby league.

Last December he ran seven marathons in seven days and raised £2.2m in support of former team-mate Rob Burrow, who is living with Motor Neurone Disease.

Speaking of his decision to leave Leeds Rhinos, Sinfield said: “As well as the role changing, I have changed through my experiences in the last 18 months both at the club and through my fund-raising activities.”

Tigers head coach Borthwick added: “It is incredible to be welcoming someone of Kevin’s calibre and experience to our club.

“He is a serial winner and an inspirational character who possesses the hard-working and tough qualities we want at Leicester Tigers.”