KENDALL Jenner has been slammed by animal lovers for using a “cruel” dog collar that risks “pain and suffering”.

The Keeping Up With The Kardashians star sparked fury when she stepped out with her doberman Pyro wearing a prong collar.

There have been petitions to make prong collars illegal in America and the so-called negative reinforcement accessory is forbidden from importing into Australia.

But animal charities have urged dog owners not to use them, claiming they risk “injury, pain and suffering” to pets.

One angry fan said: “Kendall Jenner is just gross. Cutting your dogs tail, sticking rods in its ears, training it with devices that cause pain.

“All so she can get a cool pic for her Instagram, not to mention she’s had about 5 different dogs. Whatever looks aesthetically good with her feed. Gross.”

Another said: “A person claiming to be a “trainer” that uses aversive tools is not a trainer at all. Those tools treat the symptoms, while science-based training treats the root problem.

“There is no excuse good enough to ever use these tools. Not one.”

Someone else added: “Prong collars actually do cause pain to the dog for all of you saying they don’t! Prong collars should be the last resort used to train your dog!”

A fourth complained: “WHAT now that p****es me off. Either you f***ing train that dog properly with love.

“Or you get urself a dog trainer who will help you with it. OR you give that dog away to someone who will truly take care of him… she has that money to do all that? Wtf.”

A fan insisted: “I’ve been a behaviorist for 5 years & I have trained every single dog to walk politely on a harness whether they were 6 pounds or 160 pounds.

“That is the safest equipment for walking. Prong collars cause pain/discomfort & that’s why they sometimes work.”

Hollyoaks shock as Jesse DIES – and Mitchell comes out as gay

Animal charity PETA said: “Choke and prong collars are designed to punish dogs for pulling by inflicting pain and discomfort.

“They can cause serious physical and emotional damage to dogs and should never be used.” 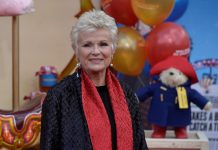