KEMI Badenoch flew out of the blocks to win support for her leadership bid today with swipes at both her rivals and Boris Johnson.

At a punchy online hustings the wildcard Tory candidate said: “Unlike others, I don’t promise things without a plan to deliver.”

She added that unlike some of her rivals she does not have “the baggage” of serving in the Cabinet under Mr Johnson.

The final five wannabe PMs made their pitch for the top job to grassroots members this afternoon and all pledged lower taxes.

They laid out their stall ahead of tonight’s first live TV debates which could fast become a slanging match as the contest turns increasingly bitter.

The 7pm match-up risks electrifying the brutal blue-on-blue race where rival camps are slinging mud at each other.

Rishi Sunak is expected to cruise into the final two after nearly winning the amount of MPs needed to go through.

THE CANDIDATES’ WEAKNESESS – ACCORDING TO THEM

Kemi Badenoch – “allowing my sense of humour to look like I’m flippant about issues”
Rishi Sunak – “I am too much of a perfectionist”
Liz Truss – “excessively over-enthusiastic and sometimes I have to rein myself in”
Penny Mordaunt – “I was tempted to say Burmese cats, as I have four and introducing them into No 10 might present some challenges with Larry”
Tom Tugendhat – “I know this is going to surprise you but I may talk about the Army a little too much”

Penny Mordaunt, Liz Truss and Ms Badenoch are fighting tooth and claw to be the main challenger with neither side backing down.

At the opening skirmish during the ConHome hustings the candidates agreed they should not engage in friendly fire.

But there was subtle sniping as Ms Badenoch fumed: “I think that when we put things in our manifesto, we need to stick to them.”

She said: “I think having multiple U-turns as a government is incredibly damaging, and means that people don’t know whether we say what we mean.

“And that’s why I keep telling everyone that I am the candidate who tells the truth.”

Ms Truss also drove a dump truck over Mr Sunak’s record as Chancellor to his face by pledging to scrap his National Insurance and Corporation Tax hikes.

Despite vowing not to “disparage” her fellow candidates, Truss allies last night launched a brutal briefing against Ms Mordaunt.

They have accused her of being “lazy”, ineffective in government and not being straight about her pro-woke views on issues such as trans rights.

Ms Mordaunt – who is now the bookies favourite – this morning said she was refusing to engage in friendly fire on her Tory colleagues.

Hitting back in a Sky News interview she said: “People, obviously, are trying to stop me getting into the final because they don’t want to run against me.”

Ex-Cabinet Minister and Mordaunt supporter David Davis claimed she was being smeared in a “black ops” campaign.

Foreign Secretary Ms Trussis urging Ms Badenoch to fold in behind her campaign so not to split the right-wing vote.

The potential support of the 27 Tory MPs who supported Ms Braverman — who fell out of the race yesterday — could prove crucial in her bid to overhaul Ms Mordaunt, who currently leads her by 19 votes.

But her Brexit backers are rowing amongst themselves on who they should fall in behind now.

Heated texts seen by The Sun show Brexit Tories refusing to follow Mark Francois’ orders to back Ms Truss – and are instead backing Ms Badenoch.

A Truss spokeswoman said: “Now is the time for MPs to unite behind the candidate who will cut taxes, deliver the real economic change we need, continue to deliver the benefits of Brexit and ensure Putin loses in Ukraine.

“Liz Truss has the experience to deliver from day one, grow our economy and support working families and then beat Labour.”

– 1.30-3.30pm: Tory MPs voted in person or by proxy in Parliament for their preferred candidate to be the next party leader.

– Around 5pm: The results of the first round were announced by 1922 chair Sir Graham Brady. Both Nadhim Zahawi and Jeremy Hunt crashed out after failing to reach the 30-vote threshold.

– Straight after: The remaining candidates fielded questions from Tory MPs at the 1922 hustings.

– Tory MPs voted in the second ballot as the candidate with the fewest votes was eliminated.

– The remaining candidates go head to head in the first TV debate live on Channel 4 at 7pm.

– They will then do battle again with a debate on ITV at 7pm.

MONDAY July 18 – The remaining candidates are put before Tory MPs at the third ballot. One more will be eliminated. Sky News will host the third TV debate at 7pm.

– The final two candidates tour the country trying to win the votes of 100,000 or so ordinary party members who will decide the next PM.

Rishi Sunak topped the latest MPs ballot with 101 votes — leaving him just 19 shy of the magic 120 to win a golden ticket to the final two.

Ms Mordaunt was second with 83 and Ms Truss third with 64.

As the rush for votes heated up, Team Truss dashed to schmooze Ms Braverman’s supporters.

If they manage to hoover them all up, she could leapfrog rival Ms Mourdant and end up in a one-on-one scrap with Mr Sunak for the Tory crown.

The Attorney General had earlier savaged Ms Mourdant over trans rights — heavily hinting she would never back her for leader.

She blasted: “My perception of Penny is she takes a different view to me when it comes to gender ideology and the position of trans, for example, I think she said a trans woman is a woman, I disagree with that.”

Ms Braverman also unexpectedly heaped praise on former Chancellor Mr Sunak, saying: “I think Rishi has had an incredibly difficult job to do navigating the finances through Covid and helping millions of people survive. I think he’s made decisions which have been very, very difficult.”

However, in a later interview, she swiped that Mr Sunak was on the Left of the party.

Tory rising star Kemi Badenoch — who continued her meteoric rise by bagging 49 votes — is also hoping to net some of Ms Braverman’s votes.

But it was a bad day for former Army officer Tom Tugendhat, who saw his vote count drop by five. He scraped through to the next round with 32 backers.

Furiously denying he will throw the towel in, his backers said he will end up “the David Cameron of the contest” as voters will fall in love with him when he appears on the live telly debates.

Ms Truss had left her home in a blue dress at 7.30am yesterday, but appeared at her campaign launch at 10am wearing red — and used the platform to outgun her rivals on tax cuts and drive a dump truck over Mr Sunak’s record.

She pledged to reverse his National Insurance and Corporation Tax hikes while also creating “new low-tax and low-regulation zones to attract investment”.

Supporters including Cabinet ministers Kwasi Kwarteng and Therese Coffey cheered as she insisted: “Now is the time to be bold, we cannot have business-as-usual economic management, which has led to low growth for decades.

“I will campaign as a Conservative and I will govern as a Conservative.” Although she voted Remain in 2016, Ms Truss attempted to burnish her born-again Brexit credentials, declaring: “In the face of EU intransigence, I developed the Northern Ireland Protocol Bill.”

She also pledged to hike defence spending to three per cent of GDP to “win the fight for freedom at home and across the world”.

And she said: “I stood up to Vladimir Putin by targeting Russia with the toughest sanctions his regime has ever seen.”

In a bid to woo to Tories hell bent on slashing the size of government, she also vowed to take on the civil service blob.

“I have proved that time and time again by delivering, even when it’s difficult.”

The backing of key Boris Johnson lieutenants Nadine Dorries and Jacob Rees-Mogg has fuelled speculation that Ms Truss is the current PM’s secret preferred candidate to replace him.

She denied that Mr Johnson’s tacit endorsement was “the kiss of death” and stressed her loyalty to the outgoing Tory leader.

THE FINAL 5 – WHO ARE THEY AND WHAT ARE THEY PROMISING?

Key pitch: No tax cuts until inflation under control

The former Chancellor has laid out his stall as the candidate for economic responsibility while rivals go gung-ho on tax cuts.

He has promised to cut taxes only when inflation has been brought under control, warning to do so now would just hike prices higher.

Rising star Kemi Badenoch has signalled she wants tax cuts but is refusing to enter the “bidding war” among candidates to slash them the most.

Instead she is serving up a platter of red meat policies that are going down a storm with many Tory MPs.

Key pitch: Tax cuts on day one as PM

Liz Truss is also pledging to cut taxes on her first day in office if she wins the contest.

The Foreign Secretary – who is yet to formally launch her campaign – has also vowed to publicly recognise China’s persecution of Uighurs as a genocide.

The Trade Minister says she is the candidate that Labour would fear most in a general election.

She has promised to slash taxes and help families by solving the childcare crisis.

The Foreign Affairs Committee Chair has painted himself as the “clean slate” candidate for a new and improved low tax, defence focused Tory Party.

He has pledged to slash fuel duty and raise hike up defence spending. 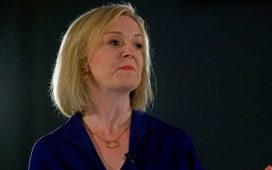 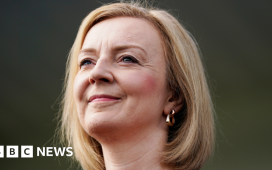