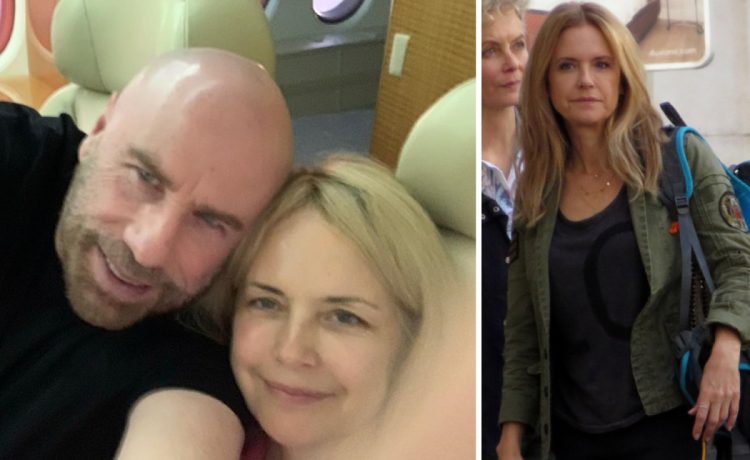 KELLY Preston looked gaunt, pale and exhausted in the last photos taken in the weeks leading up to her tragic death from breast cancer.

The mom-of-three appears a shadow of her former vibrant self in social media images and videos shared on social media.

Looking back at photos from as recently as May, it is clear the 57-year-old wasn’t well even though she managed to carry on smiling and working.

In February, Kelly was snapped as she filmed a movie in Mallorca while accompanied at all times by her daughter Ella Bleu Travolta.

Kelly looks casual in a khaki green jacket with a black top and trousers, on her back is a massive blue rucksack.

In another photo, taken in April, taken from a video of the family wishing their fans a happy Easter Kelly looks visibly frail as she sits next to her children on the sofa.

At one point Kelly even used a large sunflower to briefly cover up her face in the short clip.

The 57-year-old actress’s husband, John Travolta, revealed she had passed away after a secret two-year battle with breast cancer on Sunday evening.

He shared a photo of Kelly last night and told his fans: “It is with a very heavy heart that I inform you that my beautiful wife Kelly has lost her two-year battle with breast cancer.”

READ  Matt Baker throws Big Night In into chaos with blunder 'You've gone off the rails!'

The actor paid tribute to his wife’s “courageous fight” as he revealed that she had battled the disease for two years, but chose to keep her illness private.

Kelly is survived by her husband John Travolta and their children: daughter Ella, 20, and 9-year-old son Benjamin. Son Jett died at age 16 in January 2009.

Kelly’s death came 11 years after the couple’s eldest son, 16-year-old Jett died in 2009 after a seizure at the family’s Bahamas holiday home.

She leaves behind her famous actor husband John and their daughter Ella, 20, and nine-year-old son Benjamin.

Sharing the sad news, John, 66, wrote on Instagram last night: “It is with a very heavy heart that I inform you that my beautiful wife Kelly has lost her two-year battle with breast cancer.

Kelly Preston on how she met her husband John Travolta

John Travolta’s tribute to wife Kelly, 57, as she dies of breast cancer

“Kelly’s love and life will always be remembered. I will be taking some time to be there for my children who have lost their mother, so forgive me in advance if you don’t hear from us for a while.”

And the couple’s daughter, Ella Bleu Travolta, wrote on Instagram: “I have never met anyone as courageous, strong, beautiful and loving as you.

“Anyone who is lucky enough to have known you or to have ever been in your presence will agree that you have a glow and a light that never ceases to shine and that makes anyone around you feel instantly happy. Thank you for being there for me no matter what.