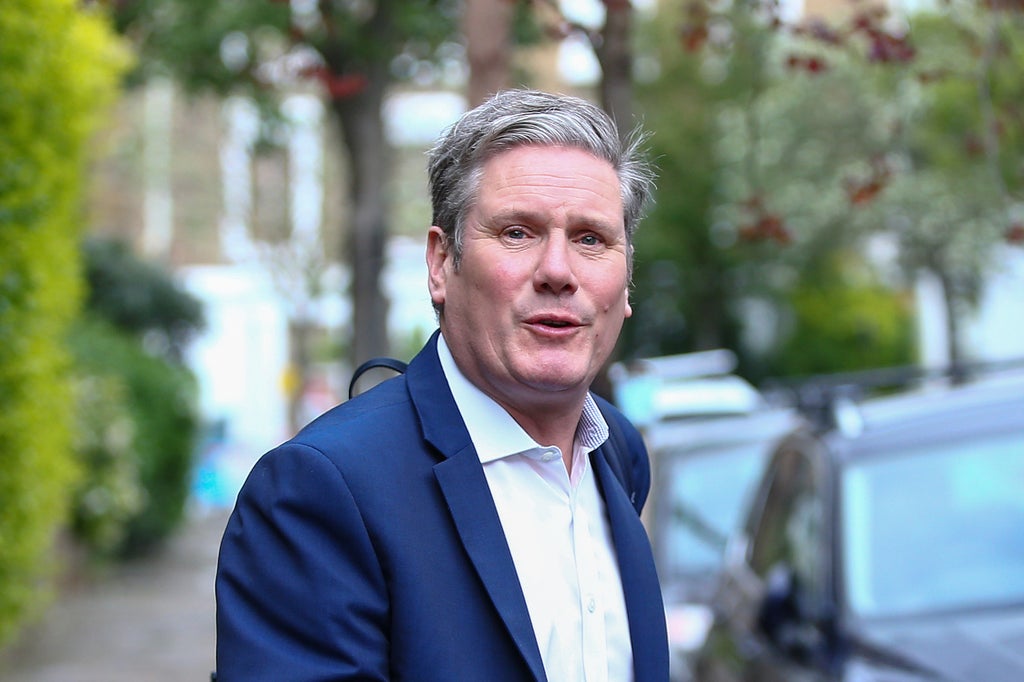 ir Keir Starmer has said he will step down as Labour leader if he is fined for breaking Covid-19 lockdown laws.

The Labour leader has been under growing pressure after Durham Police announced last Friday that it was re-investigating claims that he may have broken the regulations during a beer and curry gathering while on the road campaigning with Labour colleagues in Durham last April.

But in a major gamble on his political career, Sir Keir took the extraordinary step on Monday afternoon of issuing a statement making it clear he would quit if is issued with a Fixed Penalty Notice.

“I’m absolutely clear that no laws were broken,” Sir Keir said. “They were followed at all times. I simply had something to eat while working late in the evening, as any politician would do the day before an election, but if the police decide to issue me with a fixed penalty, notice I would of course do the right thing and step down.”

The Labour leader brushed aside questions on whether he should stand aside now while the police investigate the claims.

He insisted: “The idea that I would casually break those rules is wrong. And frankly I don’t believe those accusing me believe it themselves. They are just trying to feed cynicism, to get the public to believe all politicians are the same. I’m here to say that that I believe in honour, integrity and the principle that those who make the laws must follow them.

“I believe the politicians who undermine that principle, undermine trust in politics, undermine our democracy and undermine Britain.

“When my father passed away something just before the lockdown, my wife and I were unable to provide her father with the support we wanted to have. Because we followed the rules. Barely a day has passed where we haven’t agonised over that decision. But we did it because we follow the rules.

“We all found these frustrating at times, and I’m no exception to that. I had to isolate six times during pulling me away from my work, but the things that I love but I did it because we followed the rules.

Angela Rayner, Labour’s Deputy Leader, said: “I’ve always been clear that I was at the event in Durham working in my capacity as Deputy Leader and that no rules were broken. Eating during a long day’s work was not against the rules. We have a Prime Minister who has been found to have broken the rules, lied about it and then been fined. If I were issued with a fine, I would do the decent thing and step down.”

Conservative ministers have lined up to accuse the Labour leader of hypocrisy after Sir Keir called for Boris Johnson and Rishi Sunak to resign for being fined for attending a gathering in Downing Street in June 2020 while lockdown laws were in place.

With Downing Street braced for more fines in the coming days, it is seen by allies as an attempt to wrest back the initiative and keep the pressure on Mr Johnson who has repeatedly refused calls to resign over the partygate affair.

The Prime Minister has already confirmed he has received one fine for attending a ‘surprise’ birthday party in Downing Street in June 2020.

Sir Keir was due to speak at an event later on Monday held by the think-tank the Institute for Government but he pulled out, with Labour sources saying only that plans change.

Labour’s Shadow Health Secretary Wes Streeting said he had no idea why Sir Keir had cancelled the briefing but insisted there was no comparison with the Durham gathering and what he said was repeated law breaking in Downing Street.

Mr Streeting said: “The idea that Keir has been dodging questions… I mean he’s been out all weekend, even after a local election campaign where we did very well, he’s been out thanking Labour teams, particularly in the places that we did particularly well in these elections.”

Mr Streeting added Sir Keir has faced journalists “wherever he’s been”, including as recently as Saturday.

He added: “The idea that Keir is somehow ducking scrutiny is simply not true.”

Labour failed to give an explanation as to why Sir Keir had pulled out of the IFG event, saying only that plans change.

Over the weekend a leaked schedule for Sir Keir’s visit to Durham on April 30 was published by the Mail on Sunday which appeared to show that the Durham gathering may have been planned in advance.

Labour insists the food was consumed between work events, meaning it was within the rules despite the ban on indoor socialising.

Mr Streeting said the leaked memo “doesn’t contradict anything that Keir has said all the way along”, adding “I just don’t understand the controversy”.

But Durham Police’s decision to re-investigate the claims has placed Sir Keir in a difficult position and raised the prospect that he may have to resign if he is fined for breaking the law.

Universities Minister Michelle Donelan told LBC: “He is going to have to think long and hard on this one given how he ‘s made it such a focus over the last few months, sometimes I think to the detriment of other issues like inflation and the cost of living crisis.”