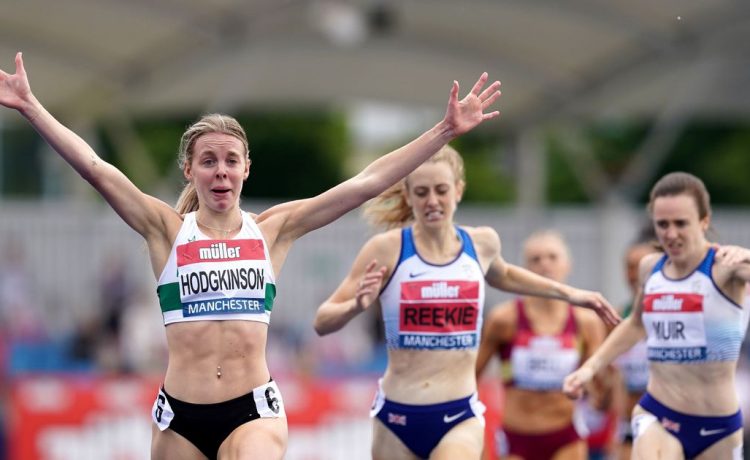 Not since Dame Kelly struck gold in Athens has a British woman medalled in the 800 metres.

But super-charged Keely served notice that she is up for ending the 17-year drought by upsetting Scottish stars Jemma Reekie and Laura Muir to land the British title.

She did so in commanding fashion, tapping into the winning mindset of NBA legend Jordan as revealed in The Last Dance.

Hodgkinson, 19, said: “I watched the documentary on Netflix and I just thought he had the mentality that he wants it so he’s going to go and get it. I like that.

“I’d definitely like to emulate Kelly but I was only two when she ran that race so I don’t really remember it.”

“I love being in this championship environment and feel I can perform under pressure,” she added.

“It’s something I thrive off, even being 19. I’m excited putting myself up against the world’s best.”

Reekie said: “Keely’s amazing and I think she really should aim to be in the (Olympic) final and to be up in the medals. She’s definitely got the potential to do that.”

Muir agreed: “For her age, what she is doing is phenomenal.”

Elliot Giles revealed his own medal aspirations after edging Oliver Dustin and Daniel Rowden by 0.01sec and 0.03sec respectively to win a thrilling men’s 800m in 1:45.11.

“I tore my quad about six weeks ago, I had three weeks off and I’ve only been back three or four weeks,” said Giles. “That injury really set me back and I was scared coming into this because I knew I wasn’t going to be the fittest. But I know I can drop a bomb in Tokyo.”

Adam Gemili won the 200m in 20.63secs to qualify for Tokyo where he has vowed to defy Olympic rules and take a knee in support of Black Lives Matter if he wins a medal.

Nethaneel Mitchell-Blake, with whom Gemili won world sprint relay gold in 2017, also punched his ticket to Japan, finishing second in 20.77.

Jodie Williams became the first woman since 2005 to complete the 200m-400m double, winning the shorter distance in 23.02secs ahead of Beth Dobbin (23.07), who continued her fine season to take the second qualifying spot.