Katie Price hit back at racist trolls for mocking her son Harvey in blackface for a cruel social media video on Wednesday.

In a clip, a woman wearing fake tan says: ‘If someone says something horrible to Harvey, what do we say?’, before a man – who is seen sporting face paint – responds: ‘Hello, you c**t’ to mimic the former glamour model, 42, and her 18-year-old.

The mother-of-five, whose eldest child has multiple disabilities including blindness, Prader-Willi syndrome and ADHD, admitted ‘words cannot describe how upset I am’ as she revealed she’s reported the post to police. 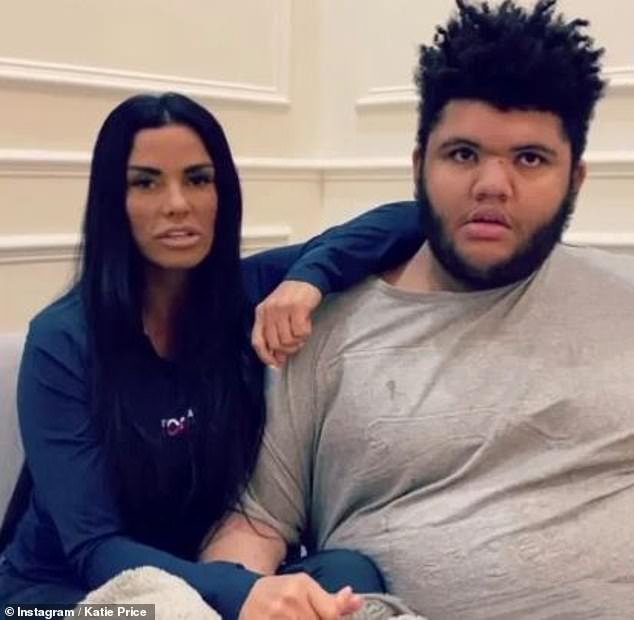 ‘Words cannot describe how upset I am’: Katie Price hit back at racist trolls for mocking her son Harvey in blackface for a cruel social media video on Wednesday

After the offensive video circulated on Twitter, the reality star took to Instagram to express her disappointment, penning: ‘I’ve been sent this disgusting racist mockery p*** taking video about me and Harvey mocking his disabilities, clearly planned hence the face painting!

‘Does anybody know these disgusting humans as I will be reporting this to the police #harveyslaw words cannot describe how upset I am this is so cruel. These people need reporting.’

A representative for Katie told MailOnline: ‘Harveys Law will be passed and these trolls will be dealt with accordingly as seen fit by the courts.

‘Katie has been fighting tirelessly for Harvey’s law to be past – This clip posted on Twitter now with the Met Police only supports her case and will see Harvey’s bill passed, Katie hopes by the end of the year of not early 2021.

‘Katie is calling out the social media giants to join her in her fight to banish trolls for good.’ 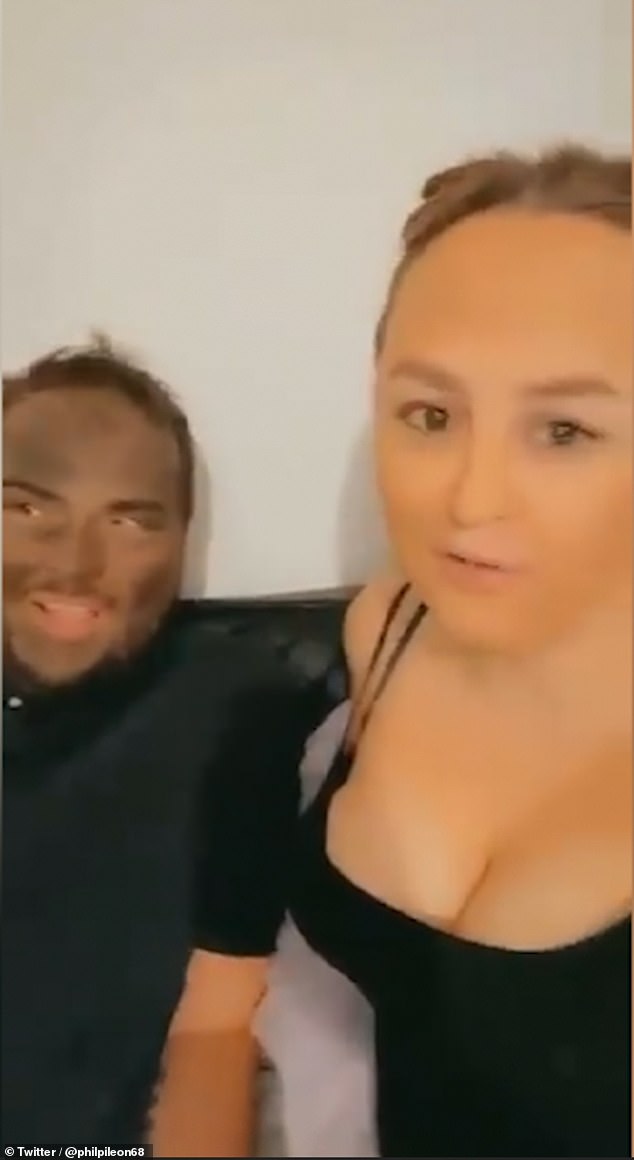 Offensive: In a clip, a man and woman mimic the former glamour model, 42, and her 18-year-old 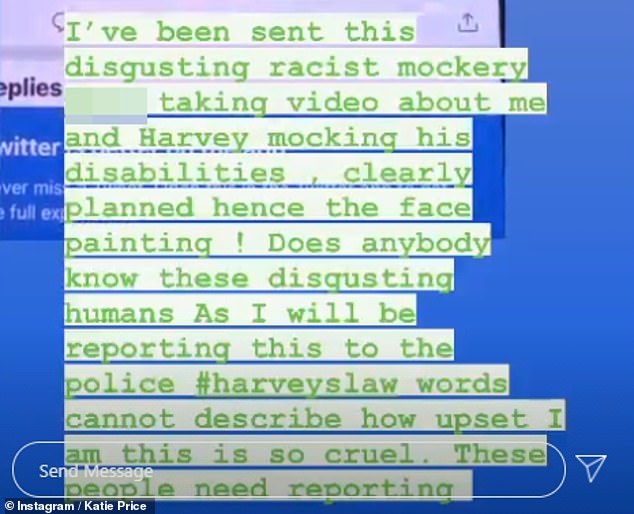 Taking action: The mother-of-five admitted ‘words cannot describe how upset I am’ as she revealed she’s reported the post to the police 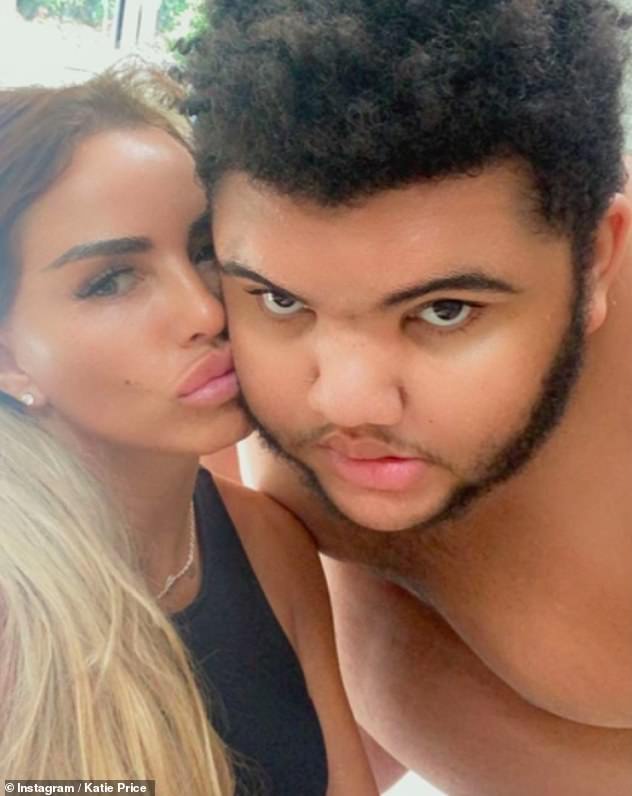 READ  The Village People's YMCA is preserved for posterity 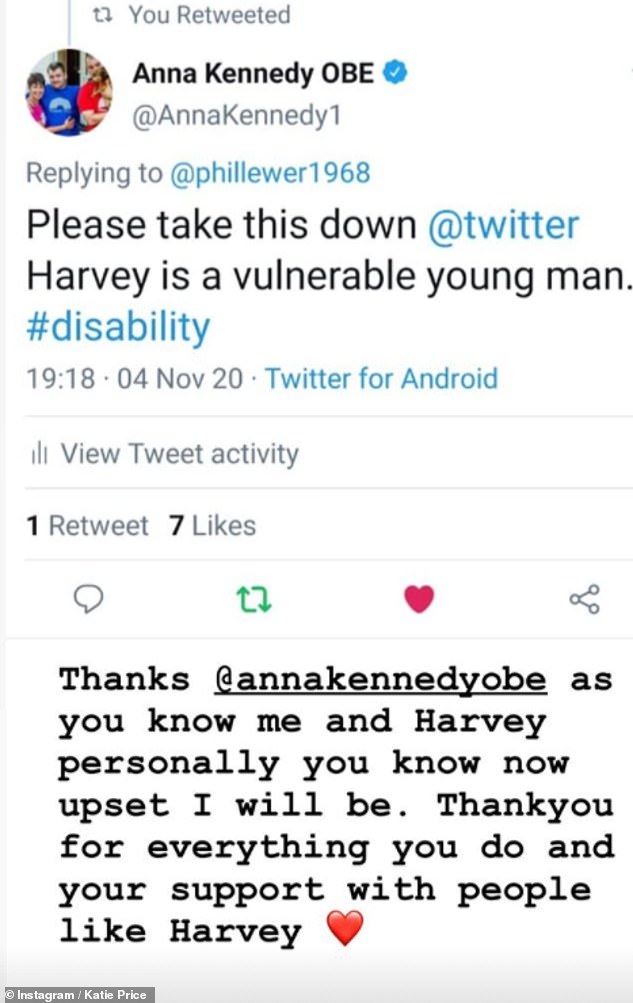 ‘Thank you for your support’: The media personality also reposted a tweet from her friend Anna Kennedy – an educator who specialises in helping children with autism spectrum disorders

The media personality also reposted a tweet from her friend Anna Kennedy – an educator who specialises in helping children with autism spectrum disorders – which read: ‘Please take this down @twitter Harvey is a vulnerable young man. #disability.’ (sic)

‘Thanks @annakennedyobe as you know me and Harvey personally you know now upset I will be. Thankyou for everything you do and your support with people like Harvey’ (sic), the businesswoman added.

Fellow social media users also shared their shock at the abuse as they said: ‘That’s obscene. Are they mocking Katie Price’s disabled son? Terrible thing to do.

‘Just report it as targeted harressmant. Because that’s what it is. That’s what I will be doing.

‘Reported! This is disgusting I’m not a Katie price fan but to target a young vulnerable person is just lowest of the low I have a sister who is autistic and she is so beautiful and intelligent there needs to be more Harvey’s and my sister in the world and less of this vile thing.

‘This is appalling racist and impacting on a vulnerable young man with a disability. This behaviour has no place in a civil society. 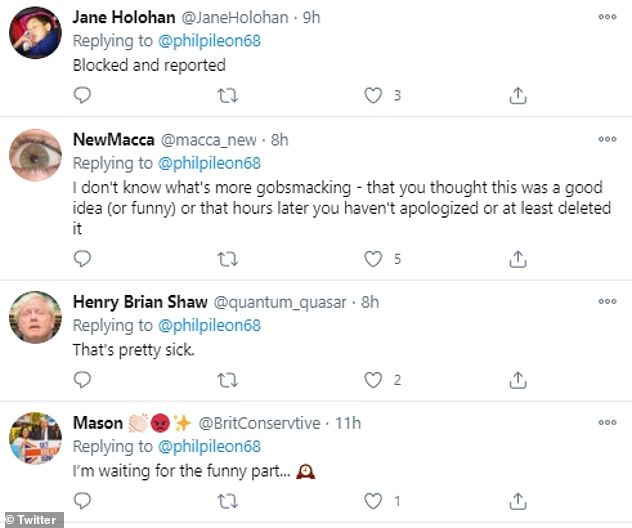 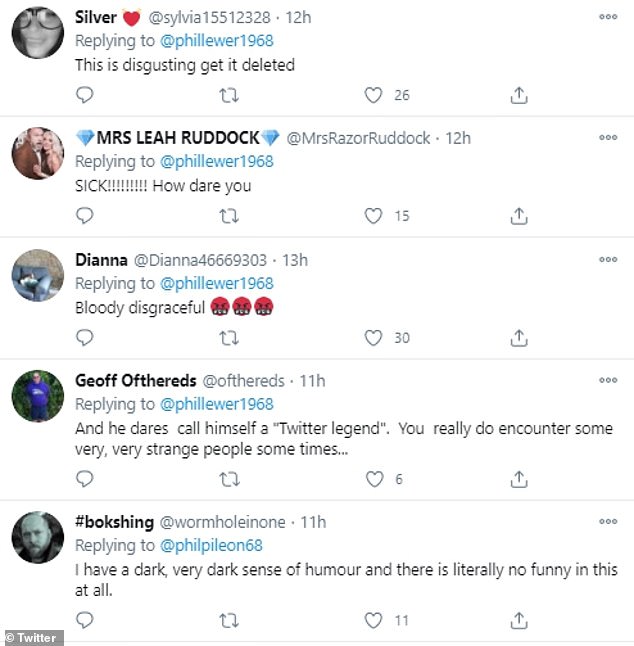 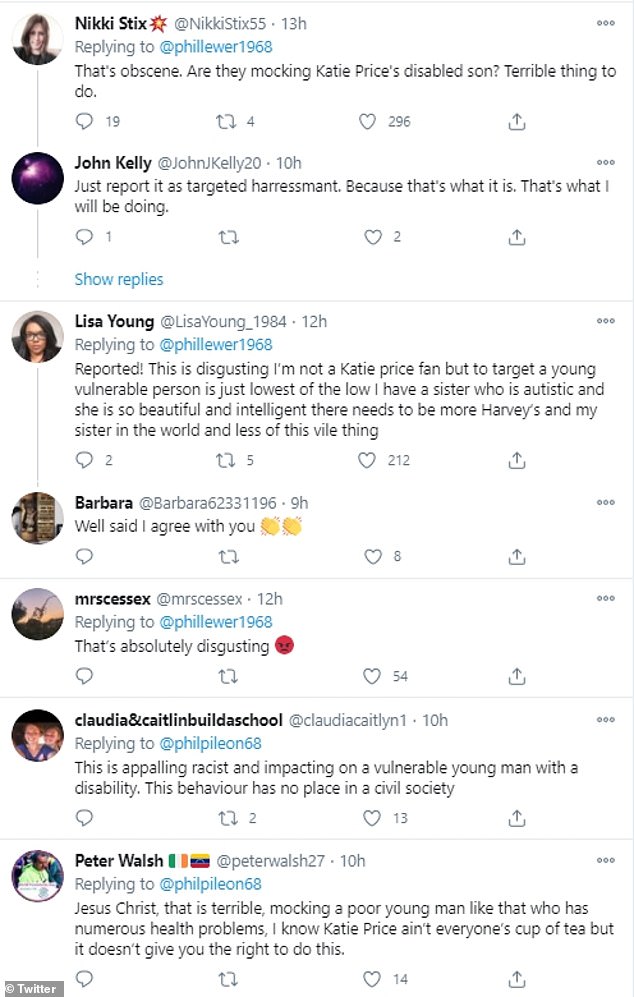 ‘What a terrible thing to do’: Fellow social media users also shared their shock at the abuse

‘Jesus Christ, that is terrible, mocking a poor young man like that who has numerous health problems, I know Katie Price ain’t everyone’s cup of tea but it doesn’t give you the right to do this.

WHAT ARE HARVEY’S HEALTH PROBLEMS?

Harvey has been diagnosed with Prader-Willi syndrome, which leaves him with an excessive appetite and led to him being overweight, with weak muscles and learning difficulties.

He also has been a rare condition called septo-optic dysplasia which has left him partially blind.

And he also has autism – a condition which affects his ability to talk and communicate with others, Attention deficit hyperactivity disorder (ADHD) which leaves him hyperactive and unable to concentrate easily.

‘I don’t know what’s more gobsmacking – that you thought this was a good idea (or funny) or that hours later you haven’t apologized or at least deleted it.’ (sic)

Blackface originated with minstrel shows in the 1830s, which used characters portraying negative black stereotypes. The characters strengthened racism and ‘codified whiteness’, especially in the US.

MailOnline has contacted a representative for Sussex Police for further comment.

In July, the mother-of-five demanded MPs change the law so online bullies face justice at a landmark parliamentary inquiry.

The media personality gave evidence to the Petitions Committee via video link for the new inquiry into online abuse.

She told MPs at the time: ‘Throughout the years I get a lot of trolling and online abuse. The difference is I’m able to speak out myself, but my son Harvey was born with disabilities, he gets a lot of racial abuse, disgusting despicable things.

‘He gets memes made about it, TikToks, posters, he gets mocked in such a serious disgusting way, there has to be some kind of justice.’

The I’m A Celeb star also appeared before a parliamentary committee two years ago in an attempt to help combat trolls. 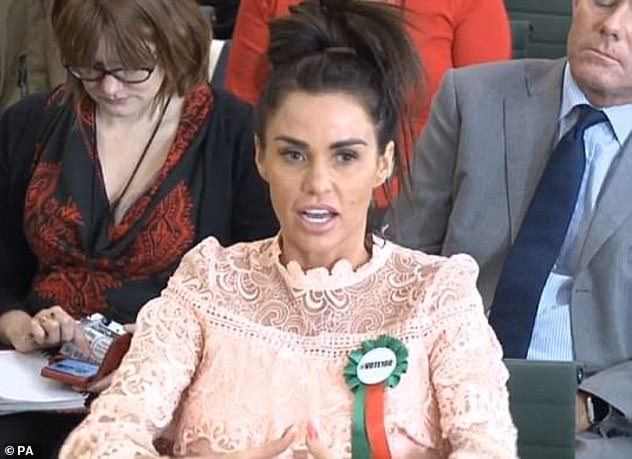 On a mission: The TV star wants a new UK law – which she has dubbed Harvey’s Law – to be created to make online trolling a specific criminal offence (pictured, February 2018)

Katie’s petition to criminalise trolling received over 220,000 signatures, and led to a parliamentary inquiry into online abuse.

A new inquiry, called Tackling Online Abuse, will ‘look again at the experiences of people who have faced online abuse, while focusing primarily on potential solutions for its reduction and prevention, legally, socially and technologically’. 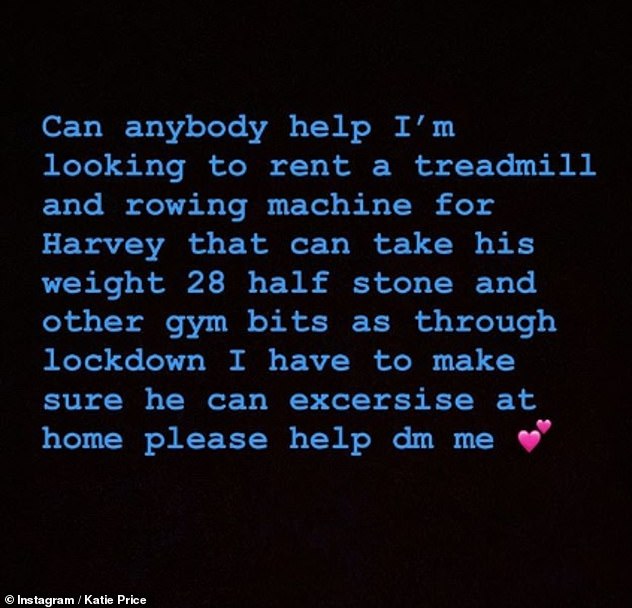 Appeal: Earlier in the day, Katie revealed the teen now weighs almost 29 stone as she appealed to her followers to find gym equipment for him to use in lockdown

WHAT IS PRADER-WILLI SYNDROME?

Other potential issues include learning difficulties, lack of sexual development and behavioral problems such as tantrums or stubbornness.

The rare condition, which affects one in every 15,000 children born in England, is caused by a defect on chromosome number 15 – and happens by chance.

Because there is no cure, treatment aims to manage the symptoms – with parents of sufferers urged to get their children to stick to a healthy, balanced diet.

Children with the syndrome can eat up to six times more than children of the same age – and still feel hungry.

It was first described in 1956 by Swiss doctors A Prader, A Labhart and H Willi.

As part of the investigation, the Committee will ‘scrutinise’ the Government’s response to online abuse and ‘continue to press on the action it needs to take’.

The influencer has Harvey from a relationship with Dwight Yorke, Junior, 15, and Princess, 13, with ex-husband Peter Andre, Jett, seven, and Bunny, six, with her third ex-husband Kieran Hayler.

Earlier in the day, Katie – who broke both her feet in a freak accident during a holiday in Turkey in August – revealed Harvey now weighs almost 29 stone as she appealed to her followers to find gym equipment for the teen to use in lockdown. 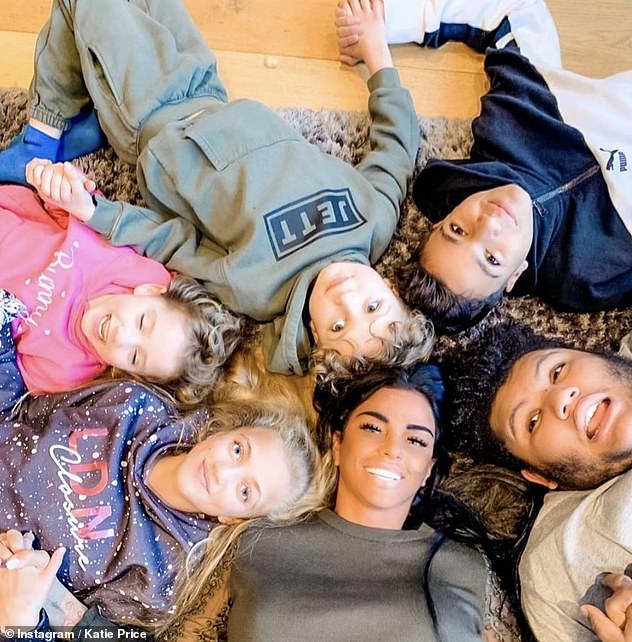 Family first: The influencer is a doting mother to Harvey, Junior, 15, and Princess, 13, Jett, seven, and Bunny, six (pictured) 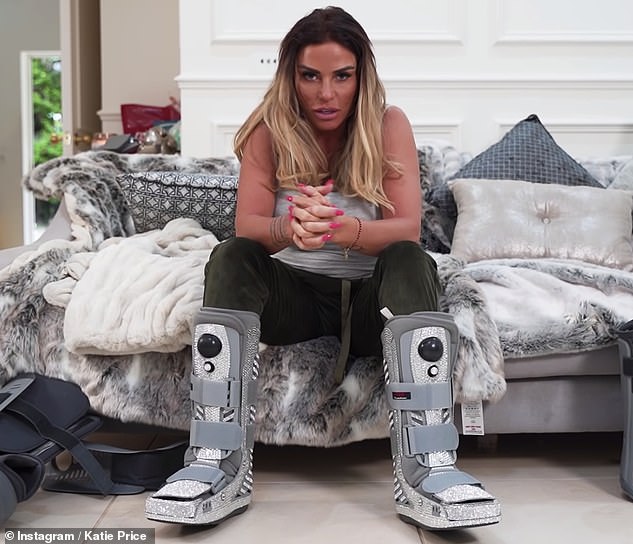 Nearly there! The media personality will reportedly preparing for a crucial scan when she returns to the UK to see whether she’ll walk again after breaking both her feet