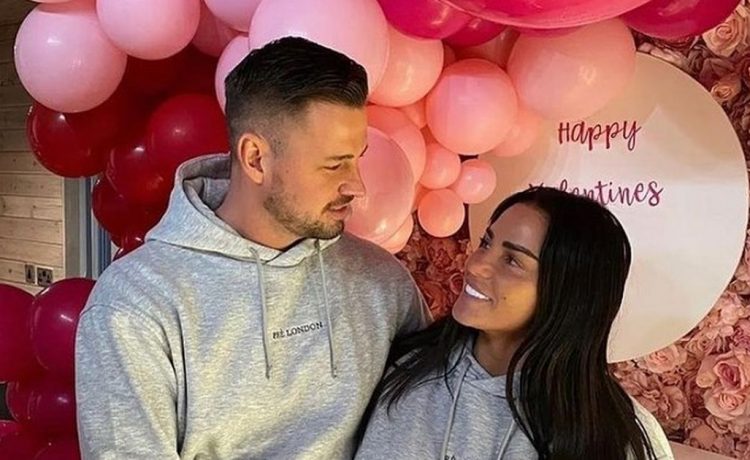 Katie Price and her partner have been accused of breaking lockdown rules for a secret romantic getaway at the weekend and were even spoken to by the police, it has been reported.

The former glamour model had claimed that 32-year-old Carl Woods had organised a Valentine’s Day holiday to a cabin in the back garden of his Essex home.

The Mirror has revealed the couple actually travelled more than 180 miles away to a woodland cabin in to Shropshire in Henlle Hall, Oswestry.

In a video on her Instagram, Katie showed off the lavish set up, she said: “Carl is so amazing. I never expected all of this.

“There’s a cabin in the garden and the decorations are unbelievable.

“So much thought has gone into it and he didn’t get anything for free – he designed and paid for it all himself.”

But the mum-of-five’s footage was identical to pictures on the website of Henlle Hall of its luxurious lodges.

And this evening owner Cosmo Lloyd said: “I saw the police myself on Sunday and they said they were looking for Katie Price.

“We are shut but were told that they were there for a photoshoot to promote some clothing. I took the police to the property and the police spoke to them.”

Before travelling to Shropshire, Katie and Carl had posed up for pictures outside Carl’s house in Dunmow, Essex.

Katie was seen receiving a massive bunch of flowers – believed to cost £10,000 – as they were set to spend their first Valentine’s Day together.

It’s not the first time the Price has enjoyed the luxurious surroundings of Henlle Hall.

Back in December, before the current lockdown restrictions, she and Carl took her kids Harvey, Jett and Bunny to the Grade II listed property for a relaxing festive break.

“Absolutely love seeing my children enjoying themselves together and here they are tonight in the Jacuzzi at @henllehall_holidays,” she bragged on Instagram at the time.

“We love coming here for a break the lodges are magical.”