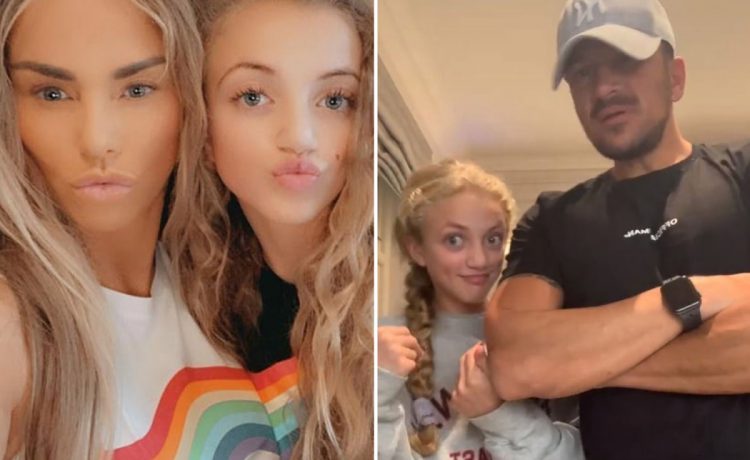 KATIE Price and Peter Andre have sparked fury by letting their 13-year-old daughter stay overnight at a friend’s house.

The teen revealed she was with her bestie yesterday as she went live on Instagram – but insisted they had both had Covid tests before seeing each other.

The current rules state that you can only mix with another household outside or in a group of six.

It is not permitted to go inside someone else’s home or stay over, even if you have both been tested.

Princess and her pal decided to make a cake and share the progress with fans by going live but she soon found herself inundated with negative comments as people questioned why she was indoors at someone else’s house.

Others asks why her parents – Peter and Katie, who are no longer together- allowed her to stay over.

According to the Daily Star, furious Princess shouted down the backlash, saying: “OMG these people. Some people really hate on kids’ life.

“Let them hate you know, it doesn’t affect us.”

She told her followers: “Guys we got tested we are negative.

“Guys basically we are allowed to mix households.”

Later in the evening, Katie’s boyfriend Carl Woods gave away that she was staying over as he commented on the live stream, telling her to go to bed.

Mum-of-five Katie has been questioned on a couple of occasions regarding her own following of the rules.

Rita Ora suffers bikini blunder as she sunbathes in Australia

Princess’ dad Peter and her stepmum Emily, who is an NHS doctor,  have both contracted Covid.

Yesterday Pete questioned why kids needed to get the vaccination, writing: Where I’m confused is if all adults will have had the jab by then, why would kids need it?

“Especially as we have always been told they are less affected by the virus and, if so, not able to spread it to adults who have had their vaccine. I guess I understand it’s to protect the elderly who can’t have a shot for whatever reason. Right now, I’m not sure. But I’d rather the kids have the jab than two COVID swabs a week for years to come.”

The backlash comes just a day after Princess was filmed appearing to not wear her seat belt while in the car with mum Katie and Carl.

The Sun Online has contacted Peter and Katie’s reps for comment.