Katie Piper has given an insight into the cruel trolling she faces, after being branded ‘repulsive and ugly’ by a social media user.

Taking to the photosharing site, the activist, 37, posted a screen shot of a shocking message from a follower reading: ‘You’re the most repulsive and ugliest thing I’ve ever seen why even bother with make-up.’

She has previously spoken about becoming a victim of online bullying, ever since she entered the public eye to raise awareness of her injuries sustained from an acid attack in 2008, and has now insisted: ‘More work needs to be done’. 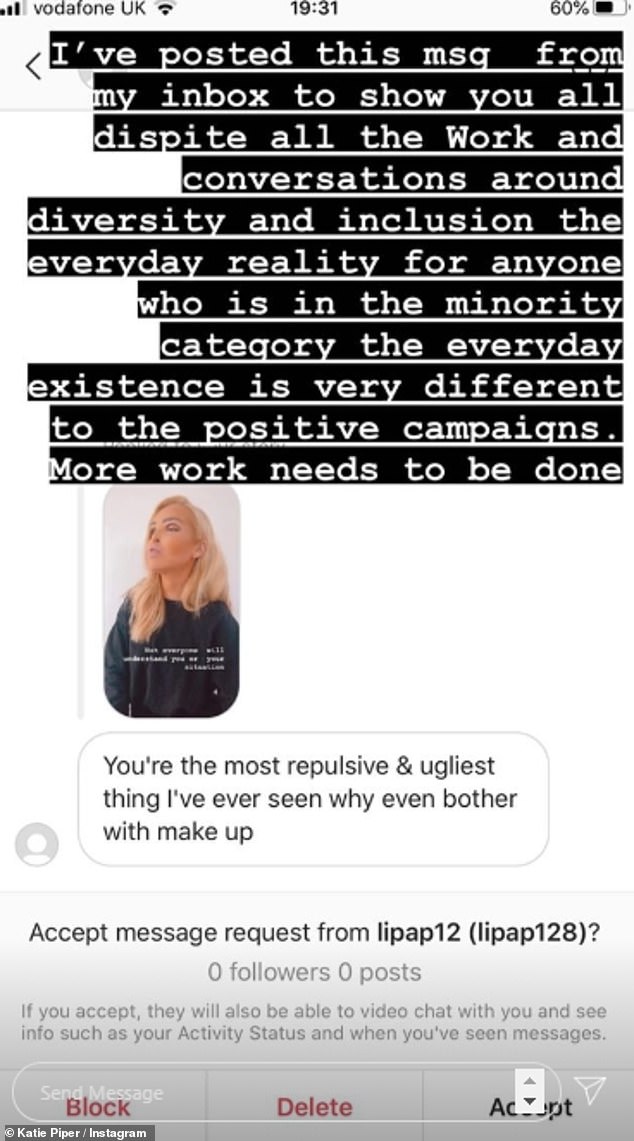 Shocking: Katie Piper has given an insight into the cruel trolling she faces, after being branded ‘repulsive and ugly’ by a social media user

Katie recently underwent successful eye surgery to prevent her eyesight from deteriorating, but was mistakenly told she had ‘gone too far’ by Twitter users, who assumed she went under the knife for cosmetic reasons.

Over the top of the screenshot of the message, Katie penned: ‘I’ve posted this message from my inbox to show you all the work and conversations around diversity and inclusion, the everyday reality for anyone who is in the minority category…

Calling for change, she went on: ‘The everyday existence is very different to the positivity campaigns. More work needs to be done.’

In a now-expired video viewed by MailOnline, Katie read an affirmation to her Instagram followers as she admitted that the online comments hurt her feelings, but said she tries not to let them impact her life. 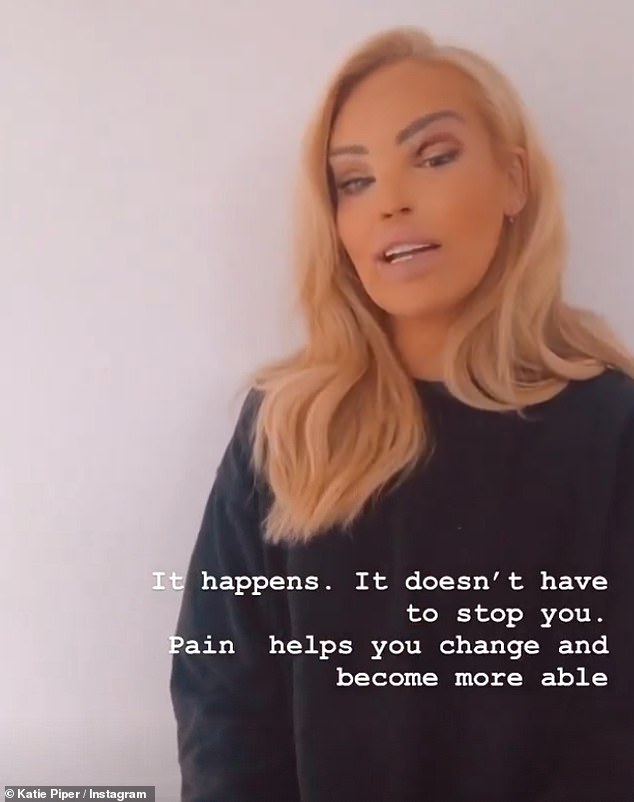 Shamed: She has become a victim of online bullying and Katie Piper revealed she was branded ‘repulsive’ and ‘ugly’ by online trolls on Friday after she appeared on Sky News

She captioned the video: ‘It happens. It doesn’t have to stop you. Pain helps you change and become more able’.

Katie also shared some pictures from her hospital bed last week after her surgery, and while her eye looked sore, she had a big smile on her face.

The mother-of-two’s latest operation came as a result of a long list of complications she suffered following a sulphuric acid attack. 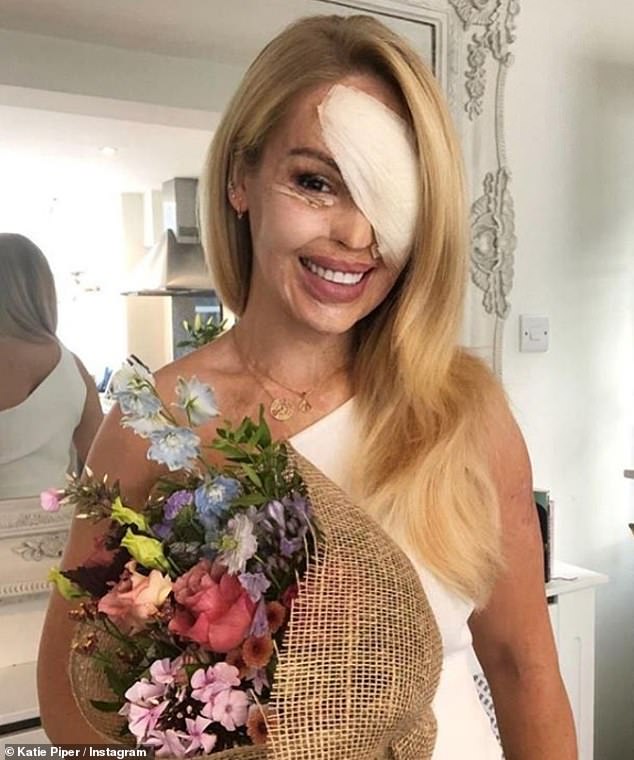 Bullying: The advocate, 37, recently underwent successful eye surgery to prevent her eyesight from deteriorating, but was mistakenly told she had ‘gone too far’ by Twitter users, who assumed she went under the knife for cosmetic reasons

As a result, Katie is blind in one eye, but she had to have her healthy eye operated on to retain her sight.

A spokesperson for the TV star said that Katie’s doing well given the circumstances.

They told MailOnline last week: ‘Katie is nearing her 400th operation now but she is being as brave as ever whilst in hospital for her current procedure.

‘The eye is healing well, and Katie remains positive about the future and cannot thank the incredible eye surgeon and team enough for their work for their ongoing restoration and preservation of her sight in her “good eye.”’ 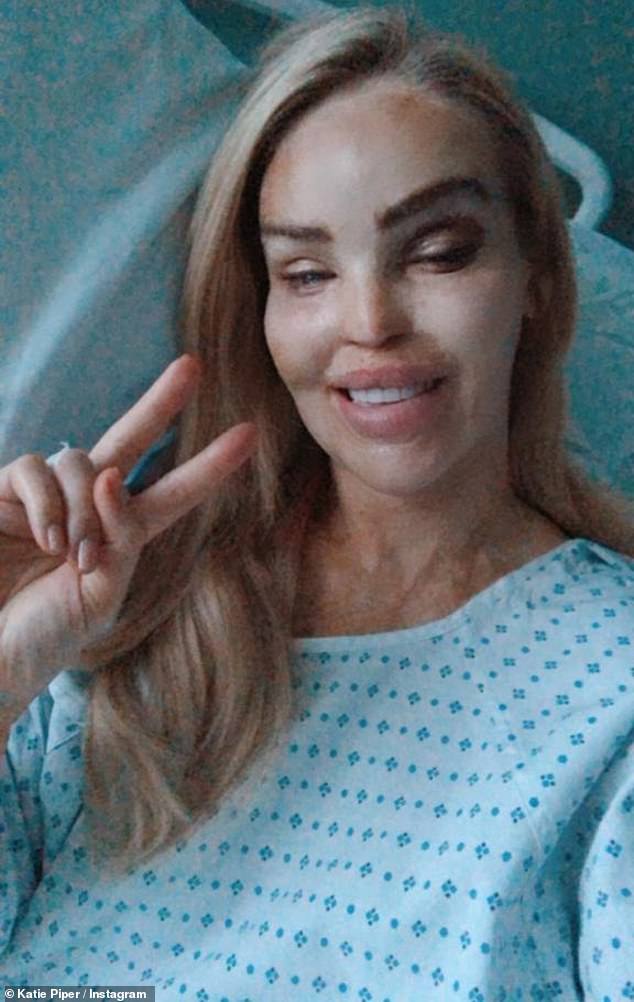 Sticks and stones: In a now-expired video viewed by MailOnline, Katie admitted that the online comments hurt her feelings, but said she tries not to let them impact her life

The sulfuric acid attack took place back in 2008 and was organised by her obsessive ex-partner, Daniel Lynch, but was carried out by Stefan Sylvestre, 31.

Daniel was subsequently given two life terms behind bars, while Stefan served six-years of his own sentence, before initially being released in 2018.

After being re-admitted to prison in November 2019 following a string of car thefts, a parole board panel ruled that he can go free again.

He was subsequently cleared for release in June this year. 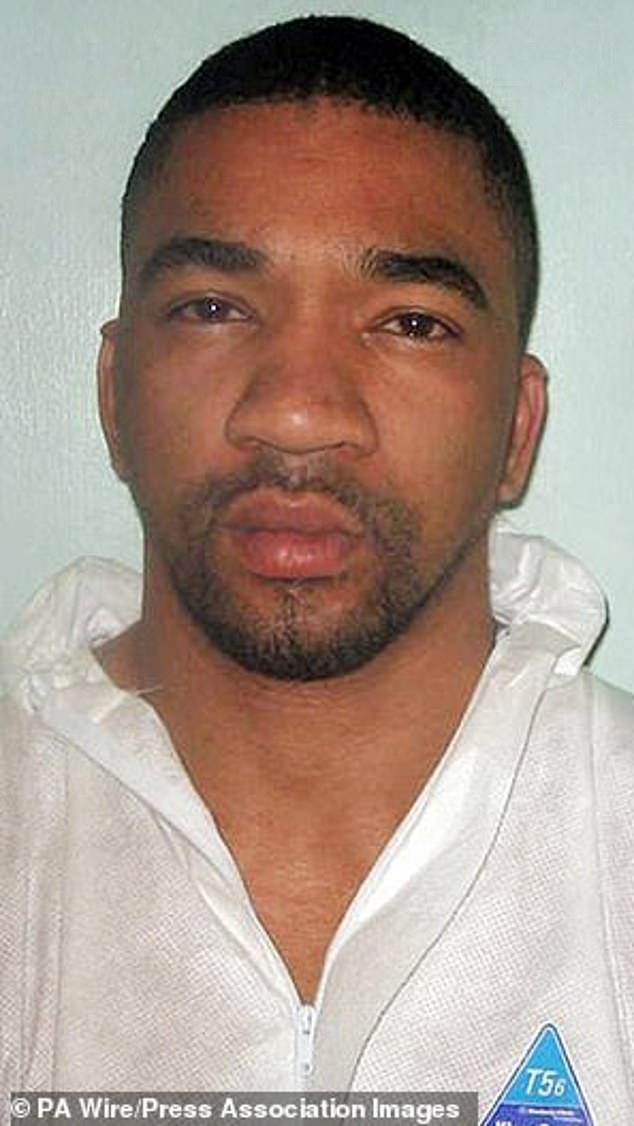 Shock: The mother-of-two is blind in one eye as a result of a 2008 sulfuric acid attack which was orchestrated by her obsessive ex-boyfriend Daniel Lynch (pictured in 2009)