She recently split from Jamie Foxx following a secretive six-year romance and Katie Holmes is putting her best, most stylish foot forward.

Since the breakup rumors began to circulate earlier this month, the actress has been showing her Oscar-winning ex what he’s missing with a string of ultra-chic ensembles.

The 40-year-old upped the fashion ante once again this Friday when she was spotted modeling a checked pencil skirt redolent of the 1960s.

Revenge is best served hot! Katie Holmes upped the fashion ante once again this Friday when she was spotted modeling a chic pencil skirt redolent of the 1960s 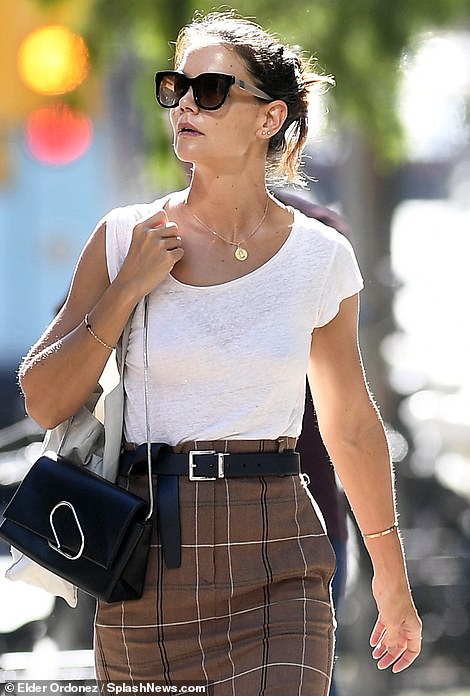 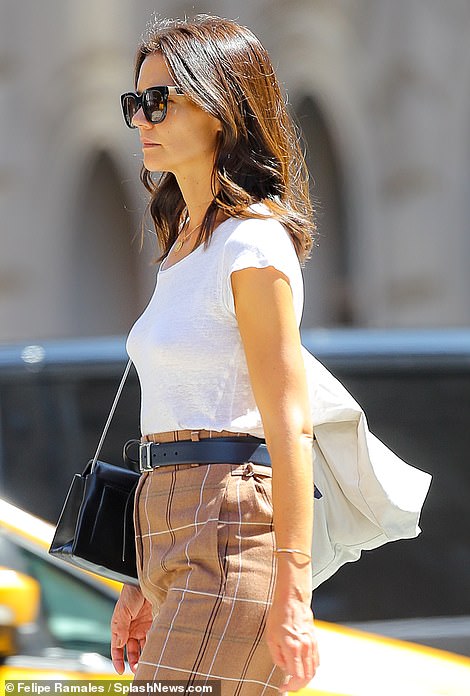 Time for pampering! Katie headed to the Serge Normant hair salon with her locks in a bun (left) before emerging with a bouncy blow-out

In an added touch, she slung on a black leather Philip Lim Alix handbag with an inspired clasp that was meant to look like a huge paper clip.

Cinching the skirt around her trim waistline with a black belt, she accessorized with a pair of massive cat-eye shades and a medallion necklace.

She spent the morning treating herself with a pampering session, heading to the Serge Normant hair salon with her locks in a bun before emerging later with a bouncy blow-out.

Although the breakup reports only really took off in mid-August, Page Six reports Katie told friends in a restaurant recently that ‘we haven’t been together for months.’

The conjecture got going after Jamie, who doubles as a record producer, was glimpsed on August 17 holding hands with singer Sela Vave as he emerged from the Los Angeles nightclub Bootsy Bellows.

Sela and Jamie have both denied rumors of a romance between them, insisting that he is just helping her out professionally – as he had with male celebrities earlier in their careers.

Jamie insisted on social media that ‘when I met Ed Sheeran, I didn’t know him from Adam. He slept on my couch for six weeks. He ended up going on to do great things. Nick Cannon was 13 years old, used to sleep in my old house. He was 13. My sister wouldn’t let him come in, ’cause we was partying too hard.’

This week, he was seen taking Sela to dinner at Nobu Malibu with his one-year-old daughter Annalise and the little girl’s mother, his ex-girlfriend Kristin Grannis.

One day after Jamie and Sela were spotted outside Bootsy Bellows, Katie stepped out to dinner in New York wearing a red leather Chanel bag, a denim skirt and a blazer flung casually over her shoulders.

Last Wednesday, two days after Us Weekly confirmed the breakup, Katie caught the eye in a particularly snappy getup while strolling in New York City with Suri, her 13-year-old daughter by her ex-husband Tom Cruise.

The mother of one showed off her enviably trim midriff in a cream crop turtleneck, complementing her high-waisted white slacks and rust-toned ankle-strap stilettos.

Katie hit the road this Monday in an elegant brown cardigan she wore half-open and let slide off her shoulders – revealing she had no shirt on over her bra.

On Tuesday, she slipped into white trousers again just under the wire before Labor Day, adding a splash of personality with screeching yellow heels.

By the following day, she was pounding the pavement in black leather stiletto boots and a black crop top that featured a fashionably slanted hem.

Katie cut a much more casual figure when she was spotted enjoying a New York City stroll with Jamie this April – while he was wrapped in an elegant coat with leather shoulders, she was in paint-spattered sweats. 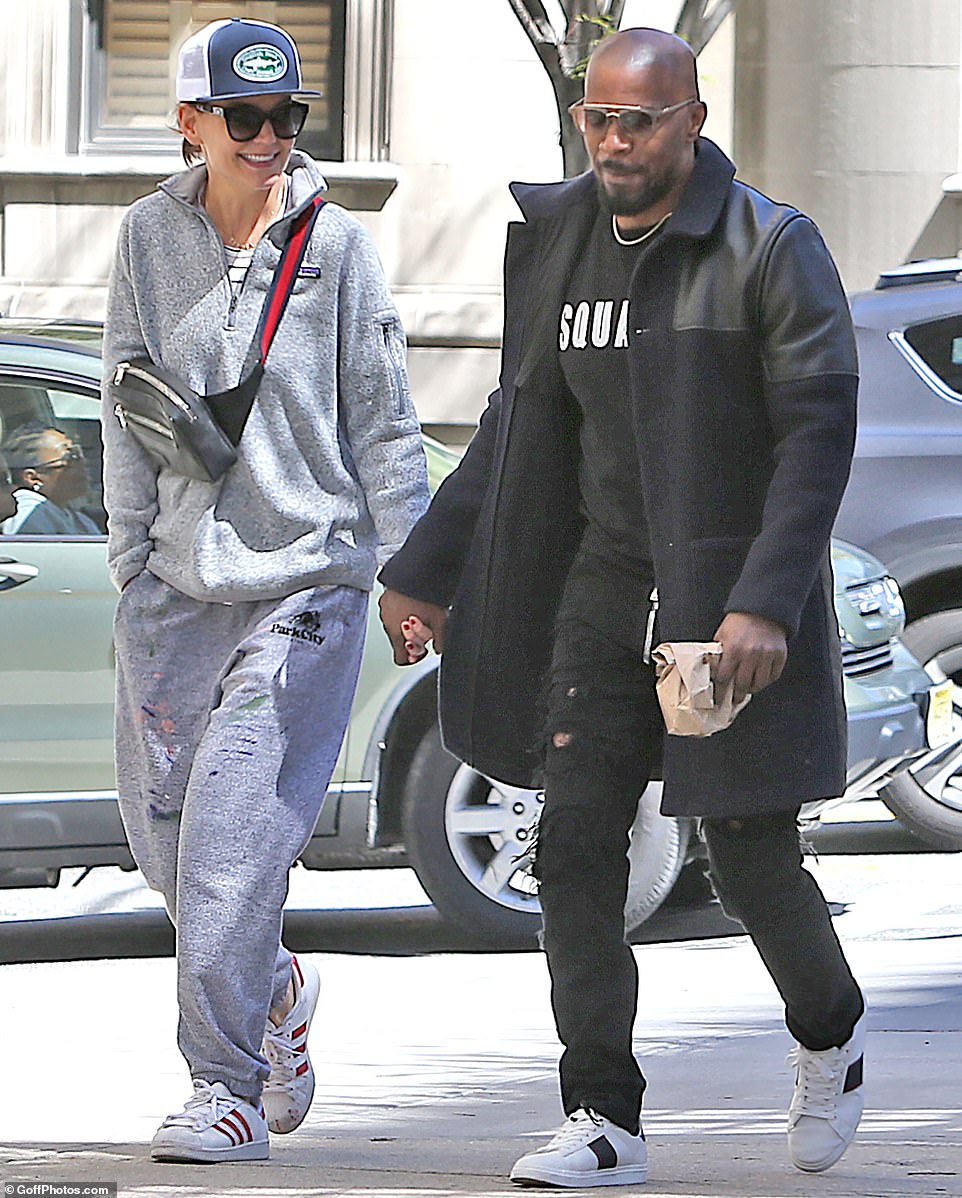 Keeping it simple: Katie cut a much more casual figure when she was spotted enjoying a New York City stroll with Jamie in April before their split

A month prior, she could be spotted accessorizing with her red Chanel purse while keeping cozy in sweats that advertised Park City, Utah, home of the Sundance Film Festival.

Their last public appearance as a couple was a glamorous jaunt on the first Monday in May to the Met Gala, where his shoes matched her royal purple Zac Posen gown.

Katie and Jamie went public as a couple in late 2017, though there had been speculation they were an item since four years earlier. 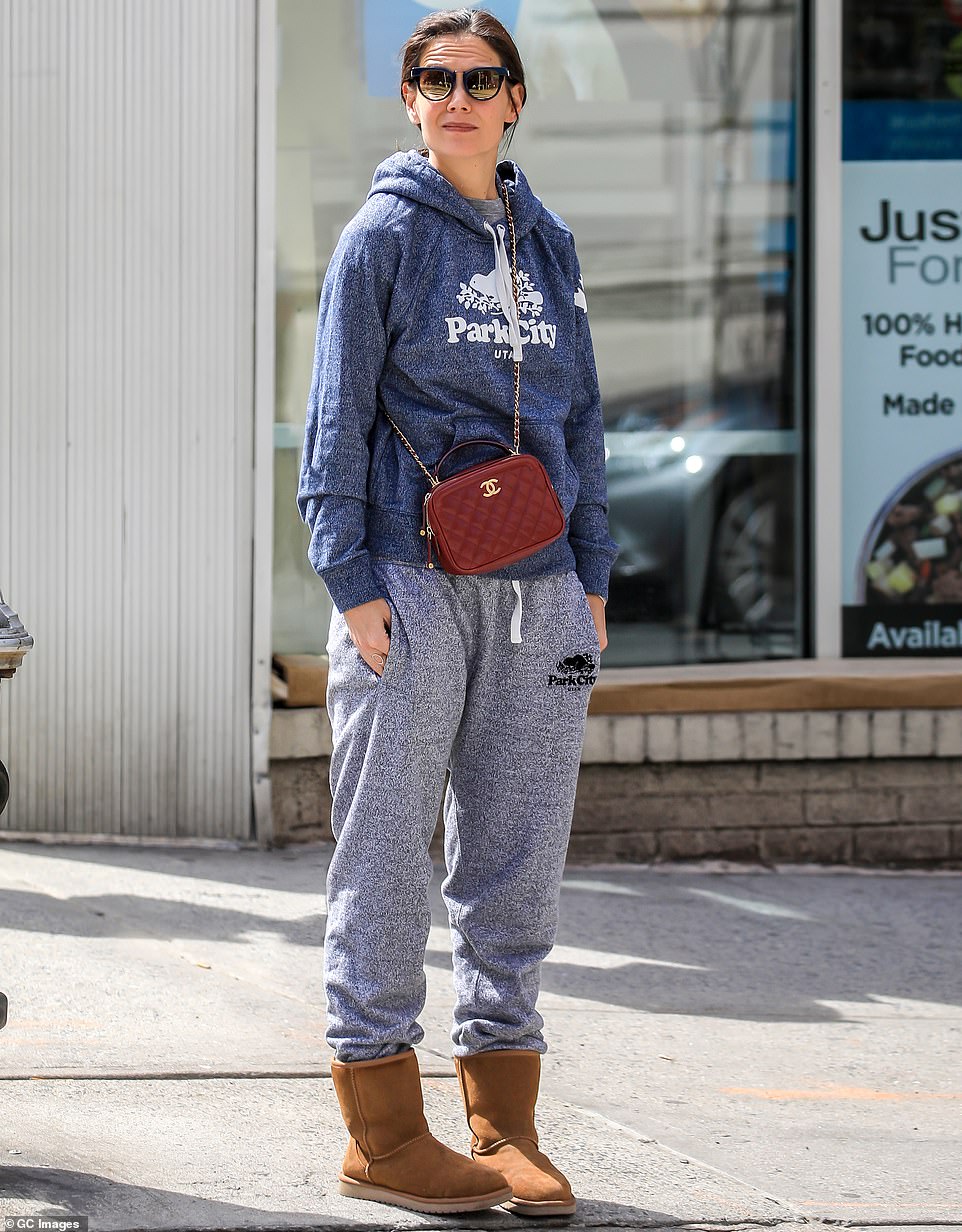 Dressing for comfort: A month prior, she could be spotted accessorizing with her red Chanel purse while keeping cozy in sweats that advertised Park City, Utah, home of the Sundance Film Festival

There was a swirl of rumors that Katie’s divorce agreement prohibited her from publicly dating anyone for five years after the split with Tom.

She initially began dating Tom in 2005, and seven weeks into the relationship, they were engaged. Their Scientologist wedding was held at the Castello Orsini-Odescalchi in Bracciano in November 2006, seven months after their daughter Suri was born.

Katie filed in 2012 for a divorce that was finalized only 10 days later, with Suri’s mother retaining primary custody, though Tom could visit, according to People.

Ron Miscavige, father of Scientology leader David Miscavige, told MailOnline in 2016 that Katie’s misgivings about Scientology – including the effect it could have on Suri – contributed to her decision to leave Tom. 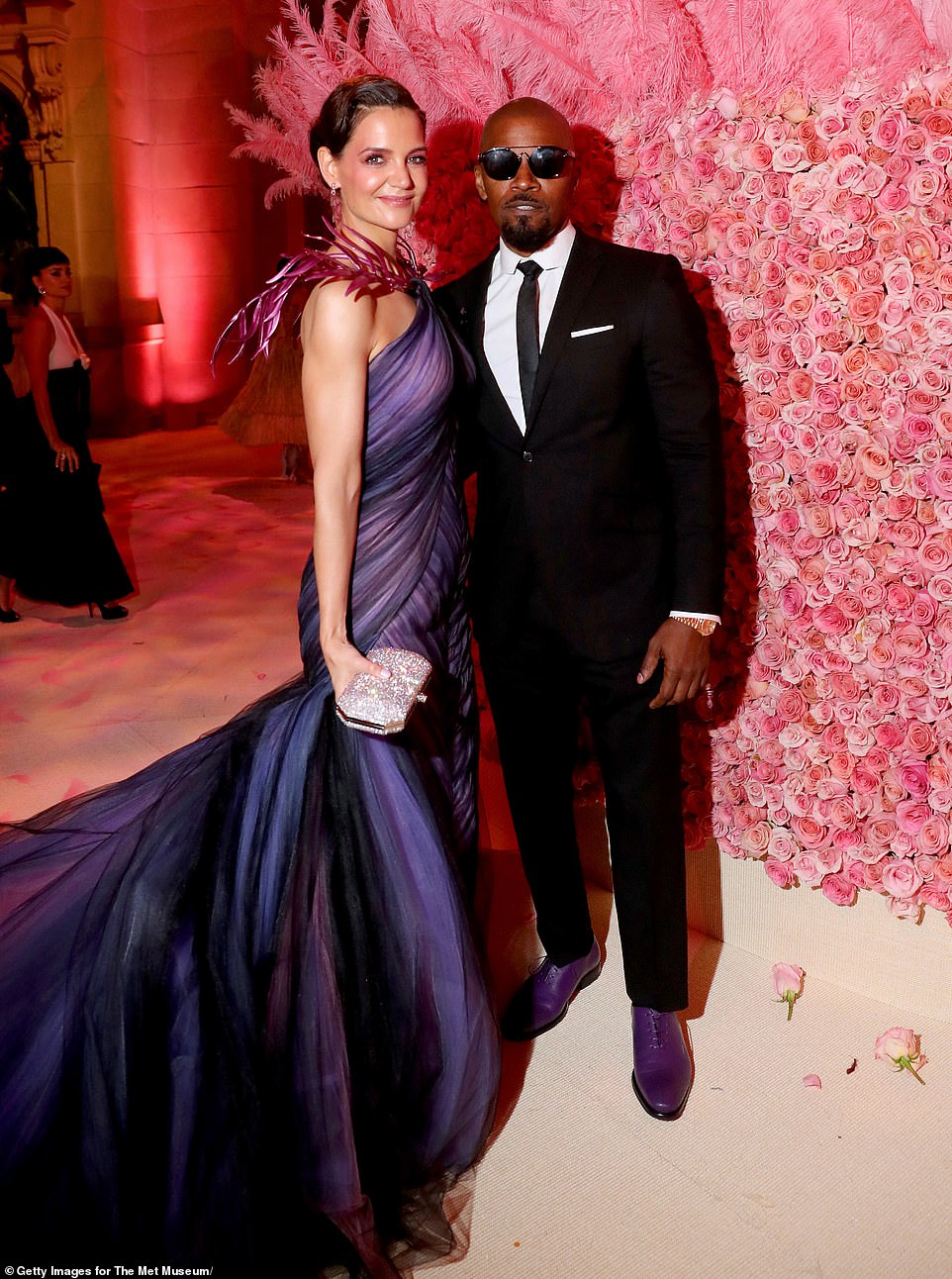 Coordination: Their last public appearance as a couple was a glamorous jaunt on the first Monday in May to the Met Gala, where his shoes matched her royal purple Zac Posen gown

Man United and Chelsea to be main title challengers to Man City and Liverpool next season, says Jermaine Jenas