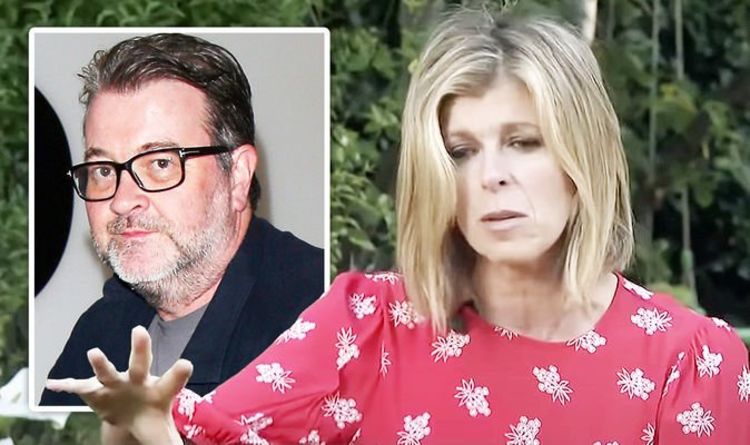 Kate Garraway tells emotional Derek she will ‘save him’

The GMB host revealed the struggles her family faced during Draper’s battle with coronavirus in the new ITV documentary Kate Garraway: Finding Derek. The mother-of-two expressed “fears” that her husband of nearly 16 years wouldn’t be the same after he’s eventually discharged from hospital. Draper, a former Labour Party spin doctor, has been under intensive medical care after he contracted COVID-19 nearly one year ago.

Draper’s body has been ravaged by the virus, left with holes in his heart and lungs and eight stone lighter after being unable to eat.

The 70-year-old, who was in a medically induced coma for months, was one of 4.31 million coronavirus cases in the UK.

Garraway, 53, admitted she felt “very lucky” her husband was still alive after more than 126,000 have died from it.

Draper has a long and arduous recovery ahead but his wife has vowed to “find a way to make it better” and become his “primary carer”, if needed.

The couple were introduced by GMTV’s political editor Gloria De Piero in 2004 and were engaged five months later.

They married in 2005 and have two children Darcey and William, now 15 and 11, who both bravely spoke out in the ITV documentary.

Draper has publicly praised his wife on a number of occasions in the past and often described her as “wonderful”.

During their early dates, Garraway was “seriously ill” with a kidney cyst that doctors initially feared was “something more sinister”.

Kate Garraway vowed to ‘save’ her husband Derek Draper and said she would ‘make it better’ for him (Image: GETTY / ITV)

They spent countless dates in the hospital ward during her two-month health battle, “sharing hospital food” and talking about “everything”.

In 2018, Garraway told You magazine that their relationship flourished during this period as they “felt so close”.

She described being “always attracted” to Draper because of his “charm and humour” – as well as his intellect.

Garraway described the mind as “the sexiest organ of the body” and said she loved that her husband was “so big”.

Kate Garraway revealed Derek Draper has holes in his heart and lungs from his coronavirus battle (Image: GETTY)

During a 2005 interview with The Guardian, Draper joked about his relatives expressing disbelief over her choosing him at their wedding reception.

He said: “My relatives kept coming up and saying things like, ‘I can’t believe your daughter’s married our fat f***er Derek.'”

After they got engaged Piers Morgan jokingly shared his surprise too when he said: “If I’d known the bar was set so low, I’d have had a go myself.”

Draper has largely stayed out of the media spotlight since he left the world of politics and became a psychotherapist.

Kate Garraway and Derek Draper have been married for nearly 16 years (Image: GETTY)

On the odd occasions he has spoken publicly, it has been in support of his wife.

In 2019, when Garraway went on I’m A Celebrity… Get Me Out Of Here!, Draper appeared on the show to discuss her progress.

He admitted it was “hard to watch her struggle with things” and that he wanted to help her.

Draper pinpointed one tough moment where other campmates hugged each other and Garraway was left on her own.

She narrowly missed the final and throughout the show revealed that she felt homesick and missed her family.

During those difficult times, Draper said he wanted to “dive into the television and give her a big hug”.

On other occasions, he took to Twitter to praise Garraway, including on their 10th wedding anniversary in 2015.

In the touching tweet, Draper described Garraway as “my awesome, wonderful, sexy wife”.

In others, Draper said he was “very proud” of her for hosting the TRIC Awards and shared interviews she had done.

In a 2016 post, he posted a photograph of Garraway to thank her for the tireless effort she poured into their marriage.

He wrote: “So @KateGarraway up at 2am to do @GMB on @TheRoyalFamily #PrinceGeorge and at 9pm is oiling our floor.”

The photo showed the ITV star on her knees with a paintbrush in her hand as she carried out the task.

Draper signed off the tweet with the hashtag #WhatAWife in appreciation of her efforts.

Prior to his battle with coronavirus, Draper regularly congratulated Garraway for her achievements.

In one he described her as a “wonderful wife” and in a second said she “looked phenomenal” in a photograph that promoted her autobiography.