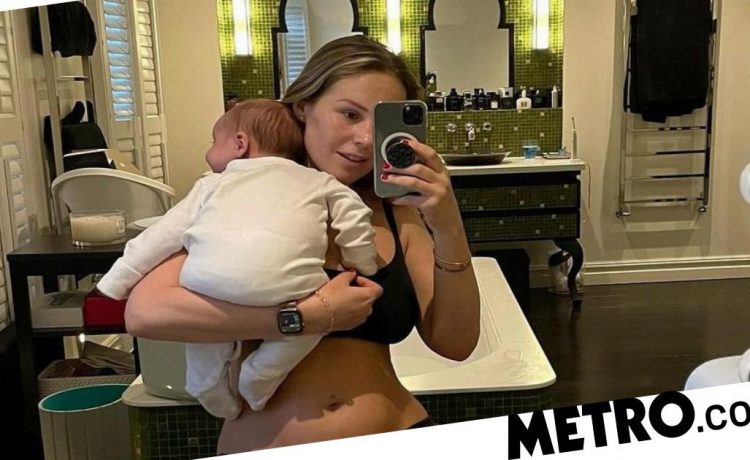 Kate Ferdinand didn’t share that she was bottle-feeding her son Cree, due to the pressure to breastfeed.

The 29-year-old welcomed her first child with husband Rio Ferdinand in December, and has been open about motherhood, from dealing with anxiety to lack of sleep.

In a new Instagram post, the former Towie star told fans that she chose not to breastfeed Cree but had been worried to admit it.

Kate shared a picture of herself feeding Cree, and wrote: ‘Me and my bubba ☺️I just love it when he looks at me when I’m feeding him.

‘I chose not to breastfeed Cree, for so many reasons and I was worried about admitting it at first as their is so much pressure to breastfeed, but thankfully now I just know that a fed baby is a happy baby and Cree is the happiest little soul and we are so grateful 👶🏻🤗.’

Kate continued on to promote Mam Baby UK, writing: ‘We had a few issues with other bottles for Cree, but @mambaby_uk has been amazing for us as a family. They give babies the breastfeeding experience because their shape requires the same movement that a baby would use at the breast. They also prevent colic with the vented base🍼.

‘If Cree is happy we are happy.’

Parents who struggled to breastfeed or chose not to praised Kate in the comments section for being open about her decision.

One wrote: ‘I didn’t breastfeed my baby and I felt a lot of the time I couldn’t tell people because it wasn’t the “right” thing to do. Our reasons were our reasons and have helped us create a lovely family balance, it was the best decision we could have made.’

Another comment read: ‘Fed is best! And a happy baby is all you could ask for.’

There has long been cultural debate over breastfeeding, from parents who don’t want to being pressured into it, to breastfeeding in public being demonised.

Back in 2018, it was revealed that the UK had one of the lowest rates of breastfeeding in the world, with 34% of babies exclusively receiving breast milk at six months.

Kate – who is also stepmum to Lorenz, 14, Tate, 12, and nine-year-old Tia – recently opened up about not loving her post-birth body, as she is used to working out constantly.

The reality star wrote on social media: ‘I’m finally starting to slowly feel more like ‘me’ again, but it hasn’t been plain sailing. I was seeing lots of ladies, and I salute you, saying they love and embrace their post pregnancy body; I wish I felt like that but in all honesty … I love that my body produced our baby BUT quite frankly, I don’t love my post baby body. I miss feeling fit & strong!

‘As women, our bodies go through so much & I feel like there is so much pressure to ‘bounce back’ when it’s just not realistic, especially with a newborn. I mean how tough is it to find the energy to exercise? Some days I am like a machine working out, walking, eating healthy and feeling on top of the world and other days (like yesterday) I haven’t found time for the exercise and I’m caught tucking my head in the sweet cupboard looking for some sugar in the hope it will keep me awake.’

Kate and Rio welcomed Cree late last year, just over a year after they got married in Turkey.

The couple began dating in early 2017, and later that year, Kate announced that she was quitting Towie and leaving showbiz to focus on Rio and his children, from his marriage to late wife Rebecca Ellison.