Kamaru Usman’s Twitter activity caused a massive stir on social media before it was revealed the UFC champion’s account had been hacked.

The welterweight champion is one of several fighters angling for a showdown with Conor McGregor in 2020 and a series of tweets launched a vile attack on the Irishman just hours before he was due to fight Donald Cerrone at UFC 246.

But it was quickly revealed Usman’s account was under the control of someone else, as the hackers threatened to release the details of the fighter’s bank account and took aim at Floyd Mayweather.

Usman’s manager Ali Abdelaziz confirmed the account had been hacked, saying: ‘Guys, Kamaru Usman’s Twitter has been hacked UFC is working on getting it back.’

McGregor harbours ambitions of becoming a three-weight UFC champion and Usman said this week he was prepared to take on the MMA superstar.

‘I am no hater, Usman said. ‘I give credit where credit is due. That young man has definitely done a lot for the sport.

‘So if he wants to step in and challenge, he is trying to make history to actually fight for a third title. I would be stupid to stand in the way of history and not give him that opportunity.’

‘I am the champion,’ he continued. ‘That’s it. Plain and simple. They will have to come to me.

‘There is a reason now they talk about me. And that’s because I have the gold. Anybody can get it. I have never said NO.

‘When Dana White calls and says I want to take out this guy, I say when. And we get it done.

McGregor is the favourite against Cerrone and his fight is expected to kick off around 5am UK time.

Watch the best of the 2000 goals scored in the WSL 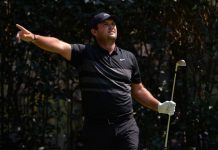