Jurgen Klopp has hinted Liverpool could be back in the market for more Salzburg players after landing Takumi Minamino ahead of the January transfer window.

Klopp was asked to comment on landing the Japanese international, who will become the club’s first senior signing in 18 months, in Friday’s press conference.

He said: “There’s nothing else to say about it. We speak about it when it’s sorted.”

But the German didn’t stop there; instead hinting Liverpool – who have now signed three Salzburg graduates – could be in the market for more of the Austrian club’s players.

Klopp added: “He’s a very good player – I can say that – but I saw a few in the Salzburg team, much more than I wanted!”

Liverpool boss Klopp put pen to paper on a contract extension at Anfield this Friday, committing himself to the Reds until 2024.

He said: “For me personally this is a statement of intent, one which is built on my knowledge of what we as a partnership have achieved so far and what is still there for us to achieve.

“When I see the development of the club and the collaborative work that continues to take place, I feel my contribution can only grow.

“People see what happens on the pitch as a measure of our progress and although it is the best measure, it’s not the only measure. I have seen the commitment from ownership through to every aspect and function of the club you can think of.

“When the call came in autumn 2015, I felt we were perfect for each other; if anything, now I feel I underestimated that. It is only with a total belief that the collaboration remains totally complementary on both sides that I am able to make this commitment to 2024.

“If I didn’t I would not be re-signing. This club is in such a good place, I couldn’t contemplate leaving.” 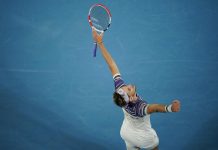 Thiem looking to crash through bigger barriers after Nadal win

Olympiakos winger Daniel Podence to have medical at Wolves