ROMA 2-3 LAZIO: Jose Mourinho was on the receiving end of a goal from his former player Pedro, who helped Maurizio Sarri’s secure victory over their local rivals in a feisty Derby della Capitale 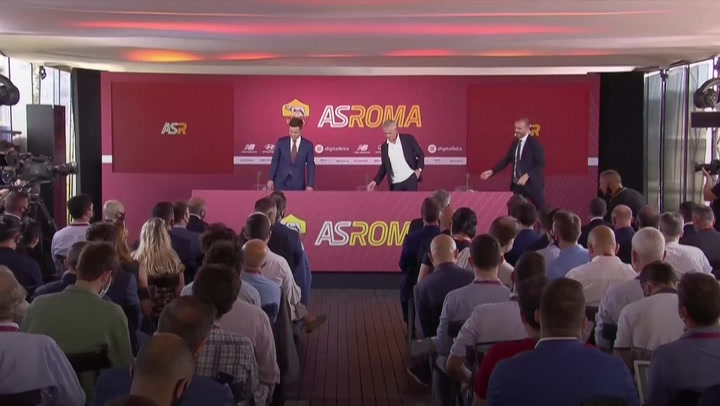 Jose Mourinho declared a “fantastic game was ruined” by poor officiating after Roma fell to a defeat by local rivals Lazio on Sunday afternoon.

Mourinho took over at Roma this summer and led the club to a creditable four wins from their opening five Serie A games.

But the Portuguese manager suffered the second defeat of his tenure as Lazio won 3-2 at Stadio Olimpico – with a familiar face on the scoresheet.

Pedro – who worked under Mourinho at Chelsea – was the man to double Lazio’s advantage on 19 minutes after Sergej Milinkovic-Savic opened the scoring for Maurizio Sarri’s side.

Ibanez pulled one back for Roma but Felipe Anderson restored Lazio’s two-goal cushion and Jordan Veretout’s penalty only served as a consolation.

Pedro’s goal is his first for Lazio since he joined the club from Roma on a free transfer this summer after Mourinho made it clear he was not in his plans.

The pair have a history dating back to Mourinho’s second spell as Chelsea manager, when they spent four months together at Stamford Bridge.

It was no surprise to see the 58-year-old offload Pedro on his arrival at Stadio Olimpico, as the Spanish winger previously spoke negatively about his experience working under Mourinho at the Blues.

“We were very low in the league, the spirits were very low, the trust was very low, everything was going wrong,” Pedro told the Daily Telegraph of life under Mourinho.

Perhaps it was written in the stars Pedro would open his account for Lazio in a victory over Mourinho’s Roma.

The former Real Madrid and Inter Milan boss certainly felt things were conspiring against him, hitting out at referee Marco Guida and his team of officials.

“Unfortunately, a fantastic game was ruined by the referee and VAR, who were not at the right level for this match,” Mourinho told DAZN .

Where does Jose Mourinho rank among the best managers of all time? Have your say in the comments.

“The second goal could’ve been 1-1, it went to 2-0. The [lack of a] second yellow for Lucas Leiva was important too. I think my team was the best on the field today.

“We dominated, we gave Lazio huge problems, they controlled the final minutes the way they wanted to, and because the referee allowed them to do so.”

It remains to be seen whether Mourinho will be punished by Serie A bosses for his comments on the refereeing, having been reprimanded by Premier League chiefs on numerous occasions for that offence.

Jose Mourinho was furious with the refereeing of the feisty fixture, which saw six yellow cards

Pedro, meanwhile, was delighted to score in a “special” Derby della Capitale.

“I am very happy with this victory, it’s important for us and the fans, as we were coming off some games that hadn’t gone so well,” the 34-year-old told DAZN .

“It was a special derby for me. We were very aggressive in the first half and had many scoring opportunities.”