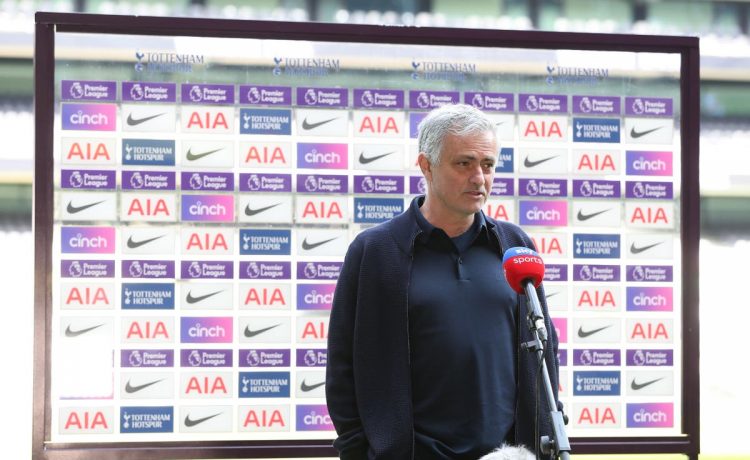 Tottenham boss Jose Mourinho is in no mood to publicly explain why his side keep dropping points from winning positions.

The 3-1 defeat to Manchester United on Sunday, where Spurs squandered a first-half advantage, took their tally to 18 points dropped after being in the lead – a record that is only second in the Premier League to Brighton’s 20.

If they had been able to see even half of those games out, the table would have a different complexion, but as it is Mourinho’s side are six points off the top four going into Friday’s clash at Everton.

Pressed on when he would be willing to share his thoughts, he replied: “Maybe never.”

Instead Mourinho tried to take the positive slant that his side are good at starting games on the front foot as only Manchester City have taken the lead in games more times than Spurs.

“I know why it happened and I know also that you can look at it in a different perspective,” he said.

Spurs travel to Goodison Park knowing that a defeat will deal a potential terminal blow to their already shaky Champions League qualification hopes, especially given Everton’s proximity to them in the table.

And Mourinho knows defeat on Merseyside could be costly.

“We’re very close to each other but there are more clubs around,” he said. “There are some clubs with a few more points, some others with a few less but with still more than 20 points on the table, I think it’s still open.

“Of course it’s the kind of match where winner gets the points and stops the loser from getting them. If you draw you stay more or less in the same position.

“So understandably I don’t think anything will be decided in there. But of course if one of the two teams wins and gets an advantage, that can be important in the direct duel. Not in the relation to all the others that are around.

“If one team wins, of course, it gets an important advantage over the other.”