Joaquin Phoenix provides a comic-book hero for the left behind with Joker, a brilliantly insurrectionist origins story that landed like a firecracker in the midst of this year’s Venice film festival. Playing the role of Cain to the sunny Abel of the Marvel Cinematic Universe, Todd Phillips’s blockbuster charts the formative years of Batman’s nemesis, rewinding to his time as a failed standup in grubby Gotham City, when he was lonesome and lost and out of joint with the world. Audaciously, it’s a film that invites us to love the monster.

Eyes rolling, jaw working, Phoenix stars as Arthur Fleck, rattling with seven different medications and brandishing a laminated card that reads: “Forgive my laughter. I have a condition.” He longs to be a comedian, but goes to pieces on stage. He’d like to work as a party entertainer, but is fired when he drops a handgun in the children’s ward. Happily, this lowly worm is about to turn. By God, his tormentors are going to sit up and take notice. First they ignore him, then they laugh at him, and then they die.

Phillips’s film – a longtime labour of love – was partly seeded by The Killing Joke, the 1988 graphic novel by Alan Moore and Brian Bolland. But its real inspirations are Taxi Driver and The King of Comedy, Martin Scorsese’s conjoined masterpieces, each spotlighting the tawdry underside of American celebrity. Joker frames Fleck against Gotham’s neon-drenched streets in a direct nod to Travis Bickle, while his flailing stabs at stardom echo the hapless Rupert Pupkin. Hardly bothering to hide its hand, the film even casts Robert De Niro as Murray Franklin, a cheesy talkshow host who says things like “But in all seriousness” and “Well, that was quite an entrance”. In his wildest dreams, Rupert Pupkin would be Murray Franklin today.

Or possibly not, because what’s most radical about Joker is the way it views success from the other end of the telescope. The film flips the pyramid, making its home in the mondo bizarro.

And by that upside-down logic Fleck is already on the path to righteousness. He’s become an angel of vengeance, a standard bearer for the underclass in a city where newspaper headlines scream “KILL THE RICH”. Of course, he’d still love to appear on Murray Franklin’s show – but this time he has an altogether different skit to perform. “I used to think my life was a tragedy,” he says. “But now I realise it’s a fucking comedy.”

What a gloriously daring and explosive film Joker is. It’s a tale that’s almost as twisted as the man at its centre, bulging with ideas and pitching towards anarchy.

Having brazenly plundered the films of Scorsese, Phillips fashions stolen ingredients into something new, so that what began as a gleeful cosplay session turns progressively more dangerous – and somehow more relevant, too. Gotham City is aflame and they’re rioting on the streets. And a rough beast is slouching towards the TV studio to be born.

Joker is released in the UK on 4 October

Ben Affleck renews support for Zack Snyder cut of ‘Justice League’: “It should be available”

Harry Potter theory: Salazar Slytherin created the Mirror of Erised for THIS purpose 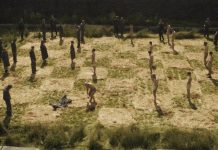 Oscar-bait no more: why serious-issue dramas are floundering

Ioan Gruffudd on sexism, Weinstein and his distressing new role: ‘I found myself crying’

“They’re bringing everybody back”: Chris Pratt on ‘Jurassic World 3’ cast

Kirk Douglas leaves most of his $61 million fortune to charity

How 'The Call of the Wild's heartbreaking dog ending veers from brutal novel (spoilers!)