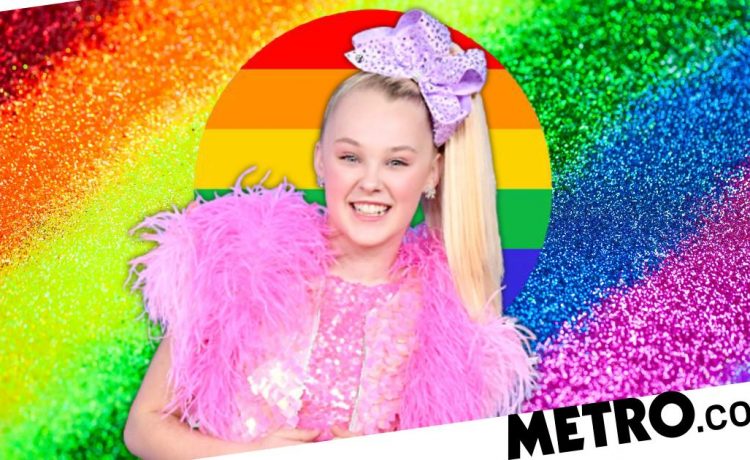 As far as coming out events go, lip-syncing to Lady Gaga’s Born This Way on TikTok before donning a t-shirt reading ‘Best Gay Cousin Ever’ is pretty damn cool.

JoJo Siwa confirmed she was part of the LGBTQ+ community on Friday with the latter, showing off a t-shirt her cousin had gifted her in a tweet. Before this, the 17-year-old sparked speculation she had come out by lip-syncing to the ‘no matter gay, straight or bi’ section of Born This Way while wearing a rainbow-patterned hair bow.

And as if those posts weren’t enough for you, JoJo also lip synced the ‘now you’re one of us’ line from Paramore’s Ain’t It Fun with the queer members of TikTok’s Pride House LA – so it’s something she wants to shout about.

Every time a celeb comes out as queer, gay, lesbian, bisexual or transgender, I celebrate, because it’s one more example of representation and one more person living their truth. But JoJo’s coming out feels even more important.

For those of you who don’t have children around you or a YouTube addiction, JoJo Siwa is big. Very big. Like, Hannah Montana big.

The teenager first gained fame on Dance Moms, a fascinating reality series that was like Toddlers & Tiaras but with dancing and more neon, before signing with Nickelodeon. A music career followed, with exhaustingly upbeat songs like Boomerang and Kid in a Candy Store, and then came the branding, with JoJo’s face on everything from dolls to shoes.

Most notably, she is the reason every girl between the ages of four and 12 began wearing oversized hair bows. Forbes estimates that JoJo’s hair bows have generated $400million in sales. She has 12.1million subscribers on YouTube. She has sold out concert tours. Kim Kardashian’s daughter North West is obsessed with her. JoJo is hella famous.

While the average 20-something may have gone through the last few years unclear as to why children are now wearing side ponytails and every colour of the rainbow in one outfit, JoJo Siwa is up there with Paw Patrol in terms of clout with the kids. She is a role model; squeaky clean and concerned with fun and happiness and self-belief.

Now, she is still all of those things, but is also gay, and it shows just how far we’ve come in terms of representation for LGBTQ+ youth.

In the very recent past, barely anyone aimed at a young audience was openly queer. Boyband members from Stephen Gately to Mark Feehily had to hide their sexuality until they were famous enough that it was ok not to, and even then it was a massive risk. Even if stars were out, it wasn’t discussed with their fanbase. Liking the same gender was considered adult, not family friendly.

What a joy it is that not only does JoJo feel comfortable enough to come out as her true self to her fans, but that LGBTQ+ youth will see her and see themselves. Don’t get me wrong, we still have a long way to go – homophobia and particularly transphobia are still rife, and not everyone can come out safely and be greeted with such celebration.

But all I have seen in the wake of JoJo’s announcement is happiness and acceptance. Her TikTok comments were flooded with messages welcoming her to the community, and thanking her for her pride. Imagine being a young kids knowing that you are gay, and not having a community to turn to. You turn to YouTube, or TikTok, and see one of the platforms’ biggest stars happily declaring she is gay too. That is representation.

It’s not just JoJo, either. The Pride House LA members, who starred in the succinctly titled Disney film Teen Beach Movie, make videos about their queerness and supporting trans partners and friends. Trans actors like Ian Alexander, Nicole Maines and Josie Totah have represented the community in film and on TV.

More young stars like Amandla Stenberg, who came out as gay after coming out as bi, are showing that sexuality is fluid, and you don’t have to label yourself if you don’t want to. Coming out isn’t, for the most part, front-page news anymore, but it’s still important and wonderful.

JoJo is making it clear that being gay and being a role model to kids aren’t mutually exclusive: they co-exist, and for the gay kids across the world, that is a ray of much-needed light.

But most importantly, JoJo is living her truth – and she doesn’t even need to buy a fresh stock of rainbow clothes to prove it.

MORE: Why celebrities coming out still matters so much

MORE: What it’s like to come out during the coronavirus pandemic

MORE: I lost everything after coming out, but it was worth it to be myself