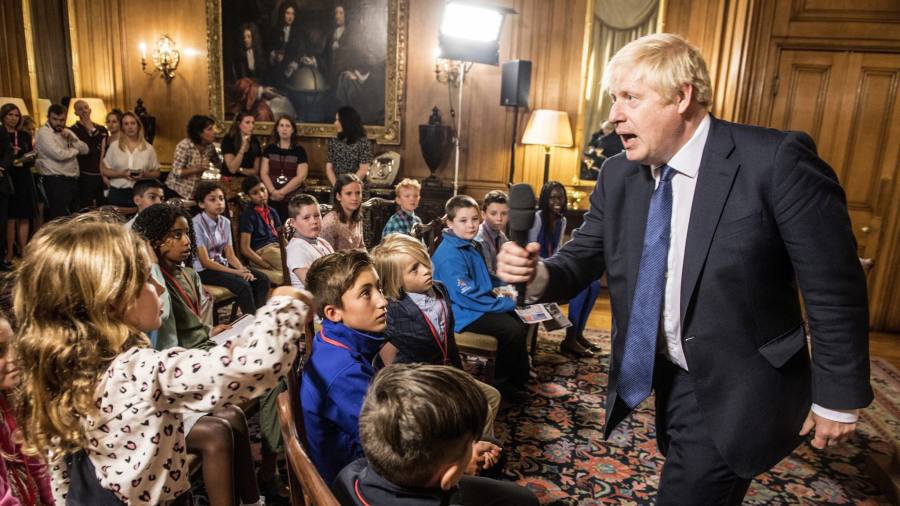 Boris Johnson warned MPs opposed to the UK leaving the EU without an agreement on Friday that they risk undermining his negotiating hand with the bloc if they pass legislation outlawing a no-deal Brexit.

As the government prepares to do battle with opposition MPs and Conservative rebels who want to pass the legislation at lightning speed next week, the prime minister warned that their initiative would make securing a Brexit deal much harder.

Mr Johnson is insisting that the UK must leave the EU on October 31, with or without an agreement.

He has said repeatedly that he wants to secure a revised withdrawal agreement with the EU, and believes his best chance of obtaining one is to refuse to rule out a no-deal Brexit on Halloween.

Mr Johnson wants Brussels to agree to remove the so-called backstop to prevent a hard Irish border that was included in the agreement finalised by his predecessor Theresa May and the 27 other member states.

“I’m afraid that the more our friends and partners think at the back of their minds that Brexit could be stopped, that the UK could be kept in [the EU] by parliament, the less likely they are to give us the deal that we need,” Mr Johnson told Sky News.

“And so that’s why I really hope that MPs will allow the UK to do a deal and to get ready for a no-deal Brexit — that’s the best way forward for our country.”

Mr Johnson will hold meetings with Conservative MPs opposed to a no-deal Brexit early next week, to try to convince them not to join efforts by opposition parties to pass legislation in the House of Commons, amid signs that the votes will be very close.

“No one can give you the correct answer on the numbers. Not all MPs know their own minds at this stage,” said a leading Labour party figure.

However, Mr Johnson’s decision to suspend — or prorogue — parliament from the second week of September until October 14 has galvanised opposition parties’ calls for MPs to approve legislation against a no-deal Brexit.

“The move on prorogation was a tactical mistake and Number 10 over-reached itself,” said the Labour figure, adding that Mr Johnson should not count on Labour MPs in Leave-supporting seats to back the government.

On Tuesday, when parliament returns after the summer recess, Jeremy Corbyn, Labour leader, will start trying to push a bill against a no-deal Brexit through parliament.

If the planned legislation goes through all its stages in the Commons, Labour peers are expecting a fierce battle in the House of Lords.

Peers would need to push the bill through all its stages on Thursday and Friday ahead of a possible prorogation on September 9.

Labour is expecting Conservative peers to table dozens of amendments to try to filibuster it.

Peter Lilley, a former Conservative cabinet minister, said he was keen to obstruct the progress of the bill but thought this would be futile because the Lords has an overwhelming majority of opposition peers.

“I would happily debate such nonsense for as long as required but I don’t think the House of Lords has the capacity and procedures to enable a minority to do that,” said Lord Lilley.

Mr Johnson’s plea to MPs opposed to a no-deal Brexit came as a Scottish court fast-tracked to next Tuesday a hearing on a petition by more than 70 parliamentarians to stop Mr Johnson suspending parliament.

Raymond Doherty in Edinburgh’s Court of Session rejected a request to temporarily block preparations for prorogation, but he brought forward a substantive hearing on the parliamentarians’ petition from next Friday. He said it was in the public interest that the case “proceeds sooner rather than later”.

Meanwhile, organisers of protests scheduled for Saturday against Mr Johnson’s plan predicted large numbers of people would be involved. The protests are being arranged by Another Europe is Possible, a pro-Remain group, and Momentum, the hard left organisation that backs Mr Corbyn.

Michael Chessum, national organiser for Another Europe is Possible, said the planned protests marked the birth of a “huge movement” to oppose Mr Johnson’s Brexit agenda.

The main demonstration in London is expected at Downing Street and more protests are expected in about 20 cities, including Birmingham, Manchester, Leeds and Glasgow.

They have drawn attention after Laura Parker, Momentum’s national organiser, called on people to occupy bridges and blockade roads. “Our message to Johnson is, ‘If you steal our democracy, we shut down your streets’,” she said.

Momentum confirmed on Friday that they supported “peaceful civil disobedience” as part of the protests.