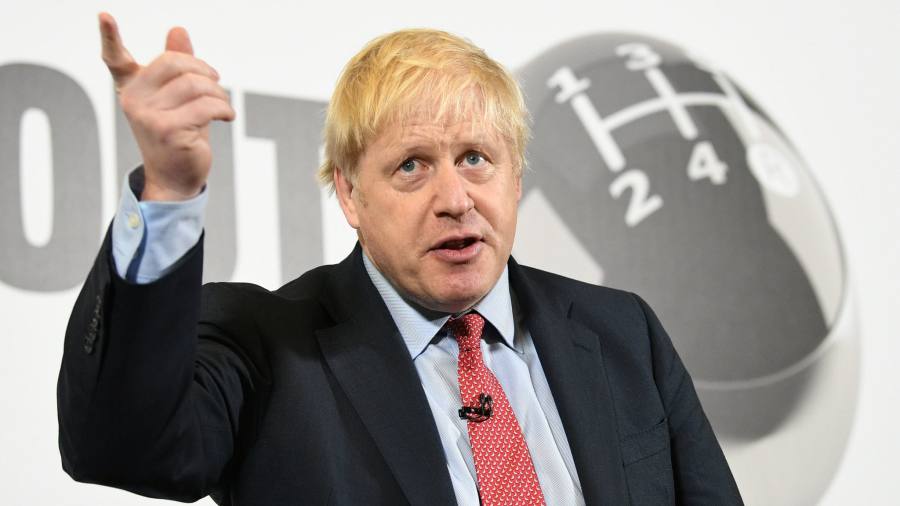 Boris Johnson will on Wednesday make a final plea to voters in “the most important election in a lifetime”, as his hitherto effective Conservative election campaign edged towards the finishing line after being hit by two last-minute setbacks.

On Tuesday, the father of Jack Merritt, the former Cambridge university student murdered in the London Bridge terror attack, accused the prime minister of trying to take political advantage of the incident.

The comments by David Merritt came as Mr Johnson tried to fight off claims that he lacked empathy after a debacle on Monday when he refused to look at a picture on a television reporter’s mobile phone of a young boy on a drip lying on a hospital floor.

Tory strategists were dismayed by the two unrelated controversies because they put a spotlight on Mr Johnson’s character and distracted from his core campaign message on Brexit in the closing days of the campaign.

Mr Johnson’s team are also anxious that last minute opinion polls could show the Conservatives on course for a convincing election victory on Thursday, giving wavering voters an excuse not to back the Tories.

Mr Merritt, referring to Mr Johnson’s statements after the London Bridge attack by Usman Khan that he wanted longer prison sentences for serious criminal offences, told Sky News: “Instead of seeing a tragedy, Boris Johnson saw an opportunity and he went on the offensive and started talking about extending the tariff for prisoners serving sentences with a maximum of 25 years.

“It was just such an ill-considered intervention, almost like a knee-jerk reaction. I think he saw an opportunity to score some points in the election.”

READ  Monzo customers shut out of accounts in lockdown

Reacting to the comments, a spokesperson for Mr Johnson said: “The prime minister has expressed his deepest condolences to Mr Merritt for his tragic loss — an experience no family should have to go through.

“The prime minister’s view remains it is extraordinary and wrong that Khan had been released halfway through his prison sentence and has long argued that sentencing should be tougher for violent and extremist offenders.”

Mr Johnson will on Wednesday claim voters face a choice between a Tory government with a House of Commons majority that can approve a withdrawal agreement with the EU, or a hung parliament that persists with Brexit deadlock.

Ahead of the last day of campaigning, he said: “This election is the most important in a lifetime. The result will define the next decade — will we go forward, grow as a country, unleash our potential? Or will we remain stuck, stood still, unable to make any progress?

On Tuesday, at a JCB factory in the Midlands, he sought to ram home his point by driving a digger through a Styrofoam wall marked “Gridlock” with his campaign slogan “Get Brexit done” emblazoned on the front.

Mr Johnson also said his “instinct” was to press ahead with the High Speed 2 rail project between London and northern England, even though he wanted to “kick the tyres and look at the value”.

Meanwhile, Labour leader Jeremy Corbyn attempted to capitalise on Mr Johnson’s maladroit handling of the case of Jack Williment-Barr, the four-year-old boy who was pictured sleeping on the floor of a Leeds hospital with suspected pneumonia.

READ  Anger on campus: Behind the student protests that have rocked Indonesia

Mr Corbyn had hoped that voters would be talking about the state of the National Health Service rather than Brexit during the run in to polling day.

He told the BBC: “It’s an example of what is happening in our NHS. It is obviously awful for that little boy and the family and the way they were treated, but it does say something about our NHS when this happened.”

Don’t let Covid curb your enthus­iasm, try these bargain ways to socalise within the curfew

Three changes furloughed workers need to know about this week, including the cut-off date for making staff redundant

UK Covid lockdown rules: The ultimate guide to what you can and can’t do in lockdown areas