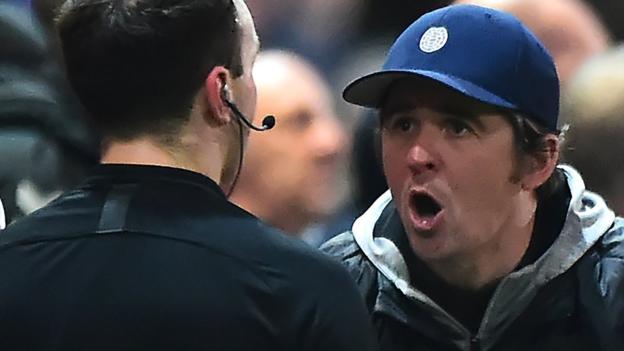 Fleetwood Town boss Joey Barton has been given a one-match touchline ban after he admitted using abusive language to match officials.

Barton was shown a red card and sent to the stands for protesting about a disallowed goal in their 0-0 draw with Bristol Rovers on 29 December.

He anticipated the ban in a post-match interview with BBC Radio Lancashire.

Barton’s ban comes into immediate effect, meaning he will also be in the stands for Fleetwood’s New Year’s Day League One game against Sunderland.

In a post-match interview on Sunday, Barton said he failed to get a clear answer as to why a goal from former Wales international Ched Evans was disallowed during the match.

“As frustrating as that is, the referee, from what I gather, what he’s said he’s disallowed it for and what’s transpired are two totally different things.

“It doesn’t help us now and I am probably going to get a fine from the FA and have to sit in the stands for a game.”

He went on to admit that the language he used when arguing with referee Paul Marsden and his team was in breach of Football Association Rule E3, which relates to comments that are abusive and/or insulting and/or improper and/or implied bias.

The draw with fellow promotion hopefuls Rovers meant Fleetwood slipped to eighth in the table, although they remain just a point off the play-off places.