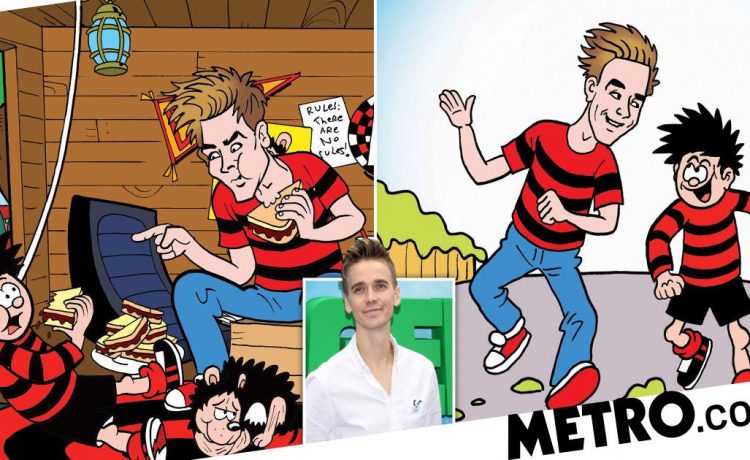 Joe Sugg is set to guest edit a special edition of Beano to celebrate 70 years of Dennis the Menace.

Cheeky comic character Dennis first appeared in the publication on March 17 1951, and YouTuber and Strictly Come Dancing star Joe will be drawn alongside him in an upcoming release.

Social media sensation Joe has been a life-long fan of Beano and he has penned multiple strips for the limited edition comic, including creating his own character Archie Ology.

The strip Birthday Prank-Ageddon sees him team up with Dennis in a bid to tease the residents Beanotown while referring to his stint on BBC series Strictly.

It will also poke fun at his fainting spell in the Bake Off tent.

As a child, Joe would practice drawing his favourite Beano characters and in his editor’s letter he shares a comic strip he drew in his youth.

It features himself alongside his favourite Beano character at the time, Calamity James, as well as a childhood photo of himself sporting a Dennis-inspired black and red striped coat.

The special edition has been expanded into a 48-page bumper edition to accommodate all of Sugg’s ideas.

Joe said: ‘I am incredibly excited to be the guest editor of Dennis’s birthday comic, I grew up with Dennis, reading Beano each week, and I can’t wait for readers to see all the fun, pranks, and surprises we’ve worked into the special issue.

‘This really is a dream project for me.’

‘We truly believe that everyone has a little bit of Dennis in them but Joe definitely embodies the Dennis spirit through and through.

‘He’s fun, cheeky and full of LOLZ which is what Dennis and Beano have always been about! We can’t wait for fans to get their hands on the special issue.’

The Dennis 70th Anniversary issue of the Beano with Joe Sugg is available in shops and online from March 17.

Subscribers will receive their copies from March 13.