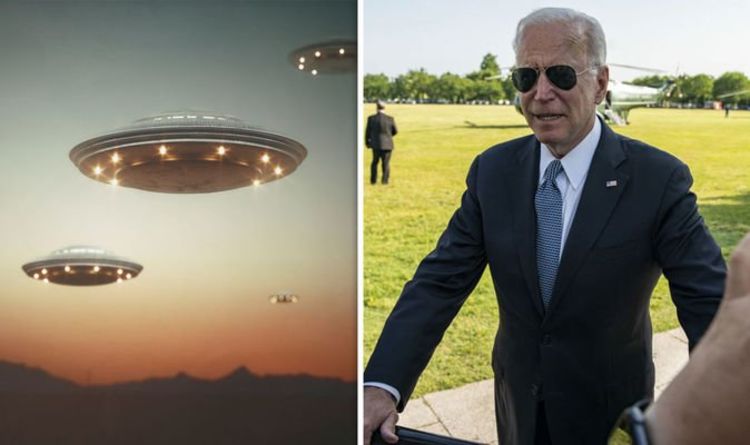 President Biden was recently asked by the press whether he knows about the existence of UFOs. While the current White House incumbent did not reveal the rumours to be true, he also did not deny them. President Biden was asked about extraterrestrials on the back of an interview James Cordon had with former president Barack Obama.

Mr Obama told James Cordon: “What is true, and I’m actually being serious here, is that there are, there’s footage and records of objects in the skies, that we don’t know exactly what they are.

“We can’t explain how they moved, their trajectory. They did not have an easily explainable pattern.

During a press conference, President Biden was asked by Fox News: “President Obama says there is footage and records of objects in the sky — these unidentified aerial phenomena — and he says we don’t know exactly what they are.

“What do you think?”

President Biden replied: “You should ask him again,” before making a swift exit.

This has led to speculation that the 45th president of the US does indeed know about aliens, but is keeping tight-lipped.

Several videos have emerged from official US sources which appears to show strange objects in the skies.

Headlines were made across the globe in 2017 when US Navy radar footage of a mystery object with a “glowing aura” and flying erratically was leaked to the public.

The debate over UFOs reached fever pitch when the footage emerged of what some called an alien craft.

The Pentagon will release a report next month over the “unidentified aerial phenomena” (UAP) sightings – which was ordered by ex-president Donald Trump.