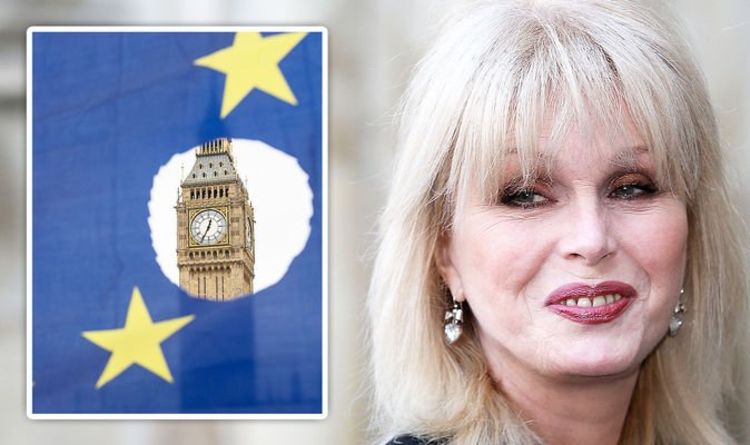 Joanna Lumley reveals Rod Stewart dedicated a song to her

The Absolutely Fabulous star will return to screens tonight on the Channel 4 show The Last Leg. The 74-year-old has been well known for her political statements over the years including the treatment of the Gurkhas and climate change. Lumley also caused a stir when she weighed into the Brexit debate.

Lumley voted Remain in the 2016 EU referendum but has defended Brexiteers a number of times.

She argued that Remainers were incorrect when they branded their opponents “cruel” and “racist” for voting to leave the EU.

In 2017, she spoke out to remind the public that “most people” in the UK had “good hearts” and followed “a sense of justice and generosity”.

She told the Radio Times: “What is highlighted are the b******s who say and do cruel and wicked things.

Joanna Lumley is best-known for Absolutely Fabulous, which she starred in with Jennifer Saunders (Image: GETTY)

“We must remember the majority aren’t those people.”

Last month, Lumley argued that “nothing has changed” between Britain and the EU’s relationship.

She told the Radio Times: “All these rules for our country are only 40 years old.”

Lumley pointed out that relationships between the UK and other countries stretched back further than those four decades.

However, she did believe the loss of Britain from the bloc would be felt harshly by those inside the EU.

She said: “The people on the continent will miss us and we’ll miss them.

“They adore us going over there and they love to come here.”

She also tried to highlight that even though Britain has left the EU, there were still a lot of shared passions and things to unite the UK and bloc.

Joanna Lumley was a model for a few years before she became an actress (Image: GETTY)

Lumley said: “We love the cheese, the wine, the arts, the music. Nothing’s changed.”

The actress’ argument seemed to suggest that there would still be mutual interest and care for one another’s nations – despite leaving the bloc.

She felt that the national lockdown had “been made extra tense by this feeling of Brexit”.

Lumley believed that people were especially concerned about Britain’s departure because there was “no normality” at the time.

In 2017, Lumley spoke out against the risk of a land border between Northern Ireland and the Republic of Ireland.

Lumley said the border “should not return” and that the must be “something else” used instead.

She told the Irish Examiner: “The European Union was set up by men and people who have made the rules.

“It can be picked apart by people who make the rules.”

During a 2019 episode of The Rob Rinder Verdict, Lumley tried to discourage the public from worrying about Brexit.

She felt it was better to wait and see what happens rather than worrying about an uncertain future.

Lumley said: “It’s easy just to turn all of those political pages over until something happens.

“You can sit there worrying yourself to death.

Previously, Lumley has voiced concern that Brexit was overshadowing other key debates, including climate change.

Joanna Lumley dated Rod Stewart ‘for 20 minutes’ before they broke up (Image: GETTY)

In 2019, she told the Daily Mirror: “I think it sometimes is extremely hard when there is something grabbing the headlines.”

Lumley urged the public to make simple and small changes, such as reducing the amount of single-use plastic they bought.

She said: “It’s not so hard, we all hated wearing safety belts and guess what, we do it.

“It’s just as simple as that, just change now, do it today.”

Joanna Lumley will feature on The Last Leg, which airs at 10pm tonight on Channel 4.