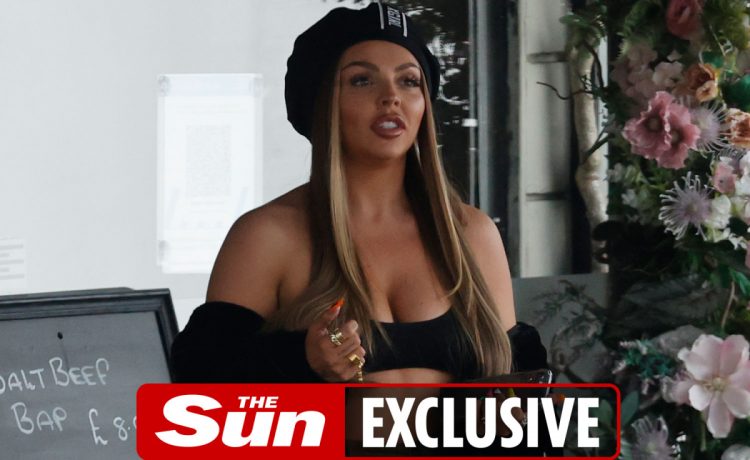 JESY Nelson looks happier than ever — and not just because the sun is shining and lockdown is lifting.

We can reveal that the former Little Mix singer is at the centre of a £2million bidding war between several record labels all desperate to get her talent on board.

The battle for her signature as a solo artist comes after she left the girl band last year.

She has since been in the studio recording her own stuff.

A well-placed source tells us: “Jesy’s tracks have got the music industry in a spin and she has big-money offers on the table from a few key record labels all desperate to sign her.

“It’s an exciting time for Jesy as she’s in a great place and has loved being creative in the studio.

“If all goes to plan she’ll have music out this year and will have some sure-fire hits. The world is her oyster.”

The singer was snapped at Boardeli’s pizzeria in Chigwell, Essex this week with pals, including plus-size model Felicity Hayward.

In December, after nine years in the group Jesy said as she announced she was leaving: “I need to spend some time with the people I love, doing things that make me happy.

“I’m ready to embark on a new chapter in my life. I’m not sure what it’s going to look like right now, but I hope you’ll still be there to support me.”

We reckon her fans will be rejoicing when she finally does unleash her voice.

SHE’S already a queen of reality TV. Now we can reveal that Love Island favourite Olivia Attwood is turning her talents to singing.

The straight-talking blonde, who has appeared in Towie as well as the 2017 series of Love Island, has signed up for the upcoming series of Celebrity Karaoke Club on ITV2.

As the name suggests, the show features various stars of the small screen belting out popular tunes on stage.

Olivia will be joined by telly presenter AJ Odudu, best known for hosting Big Brother’s Bit On The Side, as well as The Real Housewives Of Cheshire’s Tanya Bardsley.

A telly source said: “They all had a right laugh taking part and relied on some Dutch courage to keep them going.”

IT’S hard to imagine that there are many people who don’t know who she is.

But just in case anyone needs a reminder, Beyonce stepped out in a cream suit adorned with chains ­brandishing her name.

The superstar singer left everything else minimal, going braless with only a light touch of make-up.

Sarah Jessica Parker started a name-plate necklace trend with her Sex And The City character Carrie Bradshaw’s jewellery but we can’t imagine ­anyone else apart from Queen Bey pulling this off.

KHLOE KARDASHIAN looked like an influencer superhero as she wrapped her lizard-look onesie-gloved hands around sister Kourtney as the siblings reunited, post-Covid.

While we Brits make do with reunions in freezing pub gardens, Kourtney, Khloe, Kim, Kylie and Kendall resembled a pop group waiting to do a chat show ­interview as they snuggled up on a sofa.

Writing on their Instagram, Khloe said: “Sister gang back.”

Justin: I’ll Bieb there for you

AS if the Friends TV reunion wasn’t exciting enough, we can reveal producers have roped in the world’s biggest pop star for a cameo.

The cameo is a huge coup for bosses at HBO Max, who had to delay filming three times due to the pandemic.

Landing such a big star for the gang’s long-awaited comeback is sure to crank up the anticipation even further.

Biebs has long been a fan of the New York sitcom, though he was just ten years old when it finished filming in 2004.

He pranked tourists by going undercover on the Friends set for an episode of The Ellen DeGeneres Show in the US early last year.

A telly source said: “Justin was honoured to be involved and didn’t mind sending himself up wearing a ridiculous costume.

“It was all run like a military operation to keep details under wraps, and Justin nailed it.”

We can also reveal the reunion sees Matt recreating the scene where Joey dons all of Chandler’s clothes and does lunges. We can’t wait.

He’s not Scott a worry

SCOTT MILLS wishes he could tell his younger self not to worry so much.

The super-successful radio host said: “I spent so much of my young life worrying about things that I didn’t need to worry about.

“I would say, ‘Don’t worry about what other people think because, actually, a lot of the time, they’re not even thinking about it’.”

Speaking on the Out podcast, he added: “I only realised this quite recently and I’m a lot happier for it.”

Good for you, Scott.

LOVE Islander Dr Alex George has been busy this year working as a mental health ambassador, continuing his medical shifts and setting up his own self-care bath bomb company.

But we can reveal the TV star has also found time to grow close to stunning Ellie Hecht, a clerk in a barristers’ chambers who also runs a mental health page on social media called Lost In The Wild.

The pair met last year at a bar in South London and have enjoyed socially distanced meetings in the capital’s parks, weather permitting.

This is the first potential love interest Alex has had since splitting from his ex, dancer Amelia Bath, last summer.

A source said: “While Alex and Ellie have taken it slow, they are committed to each other and have enjoyed spending quality time together in between Alex’s busy schedule.

“They’re pretty smitten and have similar interests, so they have lots to talk about.

ONLY WAY IS TONE UP

“He has big plans this year and it’s got off to a brilliant start having Ellie in his life.”

Viewers fell for Dr Alex on the 2018 series of the ITV2 hit but he proved unlucky in love, often sliding into the friendzone.

We’re glad he seems to have found a great match.