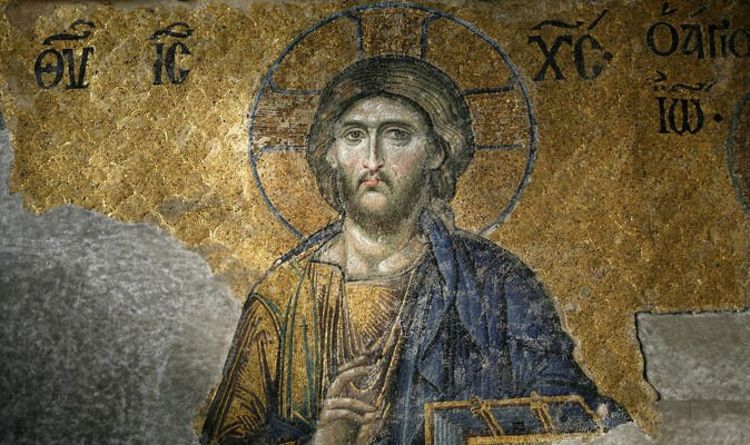 The Gnostic Gospels are a collection of early Christian texts, uncovered near the town of Nag Hammadi, North Egypt, in 1945. All of the stories found were not included in the New Testament, a point which many scholars say suggests they supplement the Bible and help to fill in the gaps of many of the text’s unexplainable events. Around 52 gospel texts were found in a sealed jar, collected in 13 leather-bound papyruses, dubbed the ‘Nag Hammadi library’.

One explicit difference remains between the Gospels: while the New Testament recounts the history of Jesus, the Gnostic Gospels explain his significance.

In reading the ancient texts, the period between his childhood and reaching the age of 30 are filled.

One, the Infancy Gospel of Thomas, was explored during National Geographic’s ‘Secret Lives Of Jesus’.

One of the popular stories from Gospel describes how Jesus worked with his father Joseph in the carpenter shop.

Gnositc Gospels: The lost texts contain 53 gospels that ‘fill in the gaps’ of the New Testament (Image: GETTY)

Craig Evans, Professor of the New Testament at Acadia Divinity College, Acadia University, said: “One of the most humorous stories in the infancy tradition about Jesus growing up in Nazareth as the son of a carpenter, is the story about Joseph who turns out to be not a very good carpenter.”

Bart Ehrman, Professor of religious studies at the University of North Carolina added: “Joseph has been hired by a rich man to make a bed.

“This will be a financial coup for the family, so it’s an important job.

“But unfortunately, Joseph makes a mistake.”

JUST IN: End of the world prophecy: Doomsday claim ‘2021 endgame’

Christianity: In the New Testament, years between his childhood and crucifixion appear lost (Image: GETTY)

Joseph cuts the wood too short and has no money to buy a replacement.

But Jesus tells him not to worry.

He uses his powers to stretch the board, restoring it to its proper length.

Nazareth: Jesus is thought to have grown up in Nazareth, Israel (Image: GETTY)

Mary: Jesus as a child with the Virgin Mary (Image: GETTY)

“One more time we see the power of Jesus at work even as a teenager.”

Other, more intimate details of Jesus’ life are also detailed in the Gnostic Gospels, like his relationship with his most devoted disciple, Mary Magdalene.

According to the canonical Gospels in the New Testament, Jesus cleansed Mary of her seven demons, and she financially aided him in Galilee; she was one of the witnesses of the Crucifixion, and the first person to see him following the Resurrection.

Yet, in the alternative gospels, the Gospel of Mary, found in the late 19th century in a monk’s tomb, and the Gospel of Philip, which is part of the lost Nag Hammadi library, “may hint at a surprisingly intimate relationship between Jesus and Mary Magdalene”.

READ  Cool Your Jets! Science Might Explain Your Weird And Emotional Airplane Behavior

Ancient Israel: Some of the most significant sites in Israel (Image: Express Newspapers)

Marvin Meyer, Professor of Bible and Christian Studies at Chapman University, during the documentary said: “Now with some new texts such as the Gospel of Mary, and the Gospel of Philip, we have a clearer idea that this figure may have been a much more significant disciple of Jesus than many people ever imagined, and may have been very close to Jesus – really, one of his closest disciples, perhaps even his beloved disciple.

“According to the Gospel of Mary, it is Mary Magdalene who knows the mind of Jesus more than the other disciples.

“It is Mary who knows the secrets of Jesus.

“And the other disciples come to Mary and say, ‘Listen, tell us what Jesus was about, the things that you know that we don’t.'”

The Gospel of Mary states: “Peter said to Mary, ‘Sister, we know that the Saviour loved you more than the rest of women. Tell us the words of the Saviour which you remember. Which you know, but we do not, nor have we heard them.’

“Mary answered, and said,’ What is hidden from you, I will proclaim to you.'”

Mary Magdalene: Their relationship has been the subject of most speculation for millennia (Image: GETTY)

The Gospel of Mary and Philip, therefore, suggests that Mary Magdalene was Jesus’ closest confidante.

Yet despite this, many scholars remain unconvinced.

Craig Evans, Professor of New Testament at Acadia Divinity College attempted to downplay the significance of the ancient texts.

READ  End of the world: Preacher predicts identity of the Antichrist - 'So many clues in Bible'

He explained: “It’s become popular lately to talk about Mary Magdalene as though she were Jesus’ lover, maybe even wife – maybe even the mother of his child.

“But they rest on no legitimate, credible, historical information.”