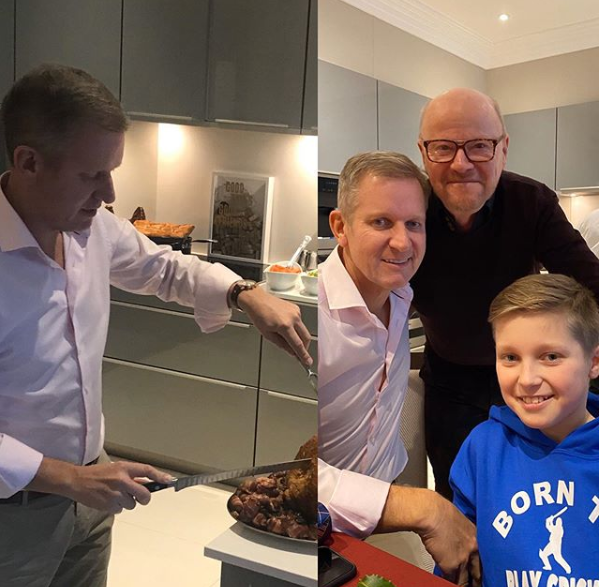 The pair lost their jobs when the ITV show was dropped back in May after a guest died from an overdose.

Graham was well known for helping out Jezza as he offered guidance to troubled guests and shared his professional opinion on a huge range of problems faced by people every day.

He amassed a social media following, and on Christmas Day he shared a heartwarming photo with his old pal.

In one of the snaps, Jeremy looked smart in a shirt and trousers, as he carved their Christmas turkey.

In another, he put a friendly arm around Graham and his son Henry.

The shrink captioned his photos on Instagram: “Happy Christmas”

His followers immediately begged the pair to return to telly, as one person typed: “Happy Christmas,when will you be back”

The Sun exclusively revealed back in May that the The Jeremy Kyle Show was being permanently axed by ITV following the death of Steven Dymond who died from an overdose.

Carolyn McCall, ITV’s CEO, announced: “Given the gravity of recent events we have decided to end production of The Jeremy Kyle Show.

“The Jeremy Kyle Show has had a loyal audience and has been made by a dedicated production team for 14 years, but now is the right time for the show to end.

“Everyone at ITV’s thoughts and sympathies are with the family and friends of Steve Dymond.”

Alll previous episodes have also been deleted from the on-demand ­service, ITV Hub.

Steve Dymond, 63, took a love-cheat lie detector during his appearance on the ITV show to convince his fiancée Jane Callaghan that he hadn’t been unfaithful – but the couple split after he failed the test.