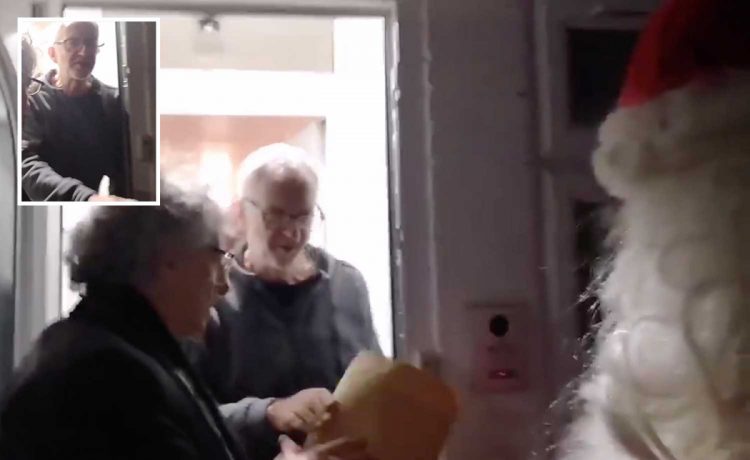 His brother – who boasts in the clips about being arrested seven times at anti-lockdown demos – rants about conspiracy theories while the former leader nods along.

They also take a pop at “big pharma” which is about to deliver the life saving Covid vaccine. Mr Corbyn, 71 shakes his brother’s hand and that of a third person in the clip.

Under Tier 4 rules only two individuals can meet outdoors but the three of them met on the Labour leaders doorstep in North London on Boxing Day. In the clip Mr Corbyn agrees that Covid is being used to privatise the NHS and says: “What we have got his Covid Billionaires.”

He later jokes: “Santa Claus how nice of you to visit – thanks for coming by” before shaking hands.

Piers also hands him a letter complaining about the “labour monstrosity” after the former leader was suspended from the party over his response to a report in anti-semitism in the party.

One of his local constituents tweeted: “This is my local MP flouting Tier 4 rules because he thinks he’s above them. This is three households mixing, no social distancing, no masks.”

Woman charged with murder over death of boy, 4, at home in South London

Concerns for missing teen, 19, who disappeared with ‘very dangerous man’

Back in October Mr Corbyn was forced to make a grovelling apology for breaching the “rule of six” after he was photographed looking grumpy at the posh nine-strong bash.

A Tory source said: “Jeremy Corbyn appears to be repeatedly breaking Covid rules, first a dinner where he broke the rule of six and now this. Does he not believe in the rules Labour says it supports?”

A representative of Mr Corbyn was approached for comment.