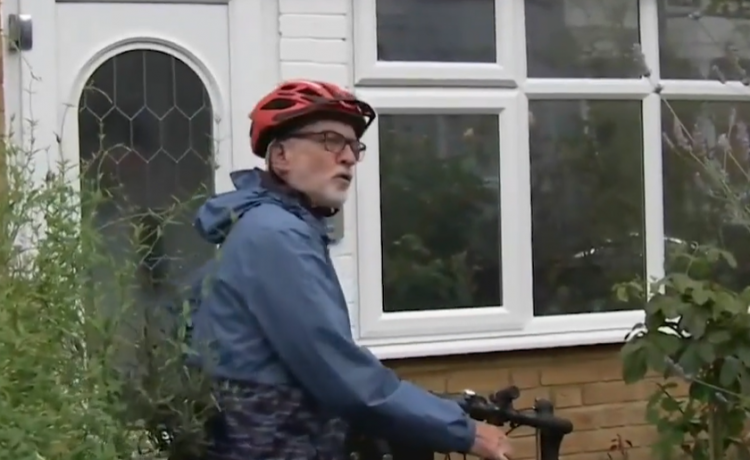 The ex-Labour boss defended using the “genuine” leaked dossier on UK-US trade talks, and claimed the accusations was an attempt to “divert attention” away from them.

The then Labour leader had tried to use the leaked NHS documents used to smear the Tories ahead of his disastrous election result.

The Government have today claimed that the dossier held up by Mr Corbyn during the election campaign – was “amplified” by Russians.

It claimed “Russian actors” were involved in the spread of the document.

It’s not clear who leaked it and how – but this is now subject to a criminal investigation.

The documents – which Mr Corbyn claimed was “proof” Boris wanted to sell off the NHS in a trade deal but offered no evidence – were first uploaded onto the internet site Reddit in October, but got no attention.

Russian actors then sought to promote them further and get more media attention to try and interfere in the UK’s election, the Government said.

Mr Corbyn said in a statement this evening: “The documents we revealed during the general election about the danger of a Trump trade deal for our NHS were genuine – as is the threat of a £500 million a week higher drugs bill.

“The Tories want to distract from the damage a Trump trade deal would do to our NHS by continuing to push the bogus claim Labour received Russian support.

“Today’s government claim is an attempt to divert attention from the threat to the NHS and the Tory party links to Russian oligarchs expected to be revealed in the long-buried parliamentary Russia report.”

The former Labour boss refused to answer questions from journalists outside his home in North London this afternoon.

Mr Corbyn was asked by a journalist: “Mr Corbyn, Do you have anything to say about Russian disruption? Were you complicit?

“Did you help those who attacked our election, Mr Corbyn?”

Mr Corbyn then shut the gate and said: “Goodbye.”

The reporter continued: “Do you have anything to say at all, Mr Corbyn, about what’s happened today?

“Do you regret what’s happened?

“Are you complicit with Russian interference in our elections, Mr Corbyn?

“Would you do it again, Mr Corbyn?

“Do you have anything to add about what happened, Mr Corbyn?

The ex-Labour leader then shut the door after wheeling his bike inside, followed with another “goodbye” to the reporter.

The dossier of leaked minutes from trade talks, which Mr Corbyn claimed was evidence Boris Johnson would sell the NHS to Donald Trump, was ripped off the website.

Analysts at the time claimed the papers, waved by Mr Corbyn at an election rally, bore the hallmarks of a Russian disinformation campaign called Secondary Infektion.

Mr Corbyn has been repeatedly accused of being soft on Russia, even refusing to blame them for the Salisbury Novichok attack.

The ousted hard left Labour leader would only go as far as saying “the evidence points strongly” to the Kremlin.

In March last year Mr Corbyn sparked a furious backlash after warning Theresa May against “rushing way ahead of the evidence” on Salisbury.

His spokesman at the time said memories of the Iraqi “dodgy” dossier meant it was “problematic” to accept the Government’s position.

Labour today distanced themselves from Russia.

A spokesman said: “We condemn any attempt by Russia..to interfere in our country’s democratic processes.

A senior Russian politician said today that allegations that Russia tried to meddle in the 2019 General Election are “anti-Russian nonsense” which undermine UK-Russia relations and the UK’s own authority.

The Russian Foreign Ministry added: “The statement is so foggy and contradictory that it is almost impossible to understand it.

“If it’s inappropriate to say something then don’t say it. If you say it, produce the facts”.

The online forum Reddit confirmed the leak was linked to the Kremlin in December last year.

It came as Vladimir Putin’s Russia was today blamed for being behind repeated cyber attacks to try and steal a coronavirus vaccine from Britain.

The UK has been able to point the finger at Russia for the very first time in explosive claims President Putin knew about attacks on Britain’s coronavirus vaccine project.

A joint operation with the US and Canada has uncovered a “malicious campaign” to steal information uncovered by Britain’s top scientists on coronavirus with targeted attacks since March.

No10 said today they believe the attacks came from a group known at APT29 – part of the Russian intelligence service.

The clandestine group of hackers is also known as “the Dukes” or “Cozy Bear”.

The PM’s official spokesman said today: “The attacks which are taking place against scientists and others doing vital work to combat coronavirus are despicable.

“Working with our allies, we will call out those who seek to do us harm in cyber space and hold them to account.”

Here’s what we know about the attacks:

‘Shark’ spotted near London Eye day after sighting near Hammersmith

The National Cyber Security Centre have thrown every protection they have at Britain’s vaccination projects to keep them safe from attempts to steal information.

British research projects are at the forefront of the effort to find a vaccine with scientists at Oxford University and Imperial University London leading the charge to prevent thousands more from dying.

Britain is expected to publish a long-delayed report into Russian influence in British politics next week.