Jeremy Corbyn has insisted the experience of a four-year-old boy having to lie on a hospital floor while he waited for a bed is a political issue.

A photograph of Jack Williment-Barr, who was waiting for treatment for suspected pneumonia at Leeds General infirmary, was published by the Daily Mirror and circulated on social media.

His mother has asked politicians not to use her son’s treatment to make arguments about the NHS in the final few days of general election campaigning.

When asked about this request, Corbyn told BBC Breakfast: “It’s an example of what is happening in our NHS. It is obviously awful for that little boy and the family and the way they were treated, but it does say something about our NHS when this happened. And more research shows there’s a very large number of hospitals where patients are at risk because of staff shortages, because of the lack of equipment, because of poor maintenance of hospital buildings.”

He said funding of the NHS was a serious political issue. “I think it has to be a political decision whether we have an NHS, how it’s funded, and what political parties decide they’re going to do with it if they gain a majority in the next parliament. And the NHS has to be properly funded, and at the moment it isn’t.”

Labour has promised to spend £26bn by 2024 on the NHS. Corbyn also confirmed on Tuesday that his party’s proposal for a four-day working week would not apply to the NHS.

The row over Jack’s treatment has become a central part of the campaign before Thursday’s vote, with Boris Johnson being criticised for repeatedly refusing to look at a photograph of Jack that he was shown by a journalist on his phone during an interview on Monday. The prime minister had not explained why he took the reporter’s phone off him during the interview and put it in his suit pocket.

READ  Josh O'Connor: 'We're in a torrid time. There is a real place for cinema with hope'

The Conservatives then falsely claimed that an aide to the health secretary, Matt Hancock, had been punched during a visit to Leeds infirmary.

The justice secretary, Robert Buckland, told Sky News on Tuesday: “This has been a long, busy election campaign. There will be moments where things can happen. I think what’s important is the prime minister apologised. He looked at the photograph and apologised. Yes, I accept there was an unexpected moment where a journalist colleague presented a phone to him … but he did look at the photograph.”

Asked whether his inability to look at the photo during the interview showed a lack of empathy, Buckland said: “I think that’s a false claim. He’s somebody who is entirely capable and shows empathy and that human emotional intelligence. His contact with people, when I see him talk to members of the public there is an instant connection there.”

On the claim an aide had been punched, Buckland said he did not know who had been briefed what information but the contact between the aide and a protester looked accidental.

Corbyn also used one of his final interviews of the campaign to say he would appoint a team of new ministers from all parts of the country to lead fresh negotiations with the EU if he became the prime minister. This would be backed up by an expert team of civil servants.

He would not name the potential appointees but said they would reflect all political views held on the leave and remain spectrum.

Coronavirus US outbreak: What are Coronavirus symptoms? How to avoid catching deadly virus 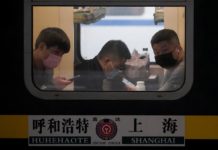 ‘I used gender transition as a form of escape’

Will robots make doctors obsolete? Nothing could be further from the truth | Ranjana Srivastava

Coronavirus outbreak: How to prevent coronavirus

Can crisps be healthy? When it comes to the crunch, will they do you any good?

Dentist who pulled teeth while riding hoverboard is grounded