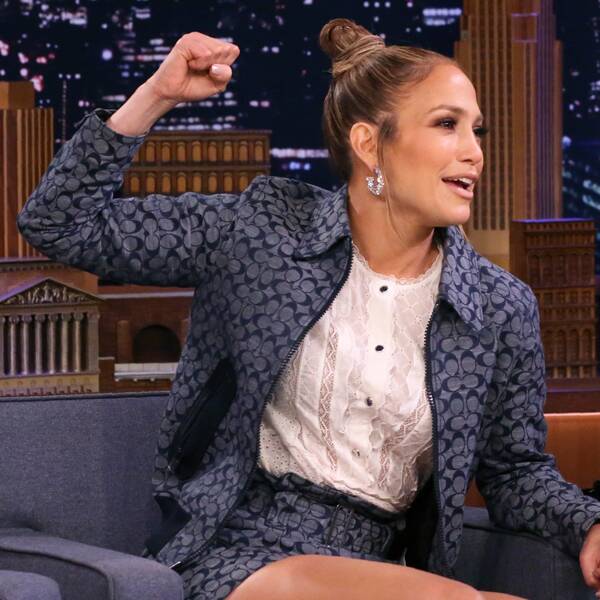 It’s been nearly a week since the Super Bowl LIV and while many of us may have forgotten what team won—let alone who played—one thing we won’t forget for a long time is that halftime show performance that Jennifer Lopez and Shakira put on.

From the fashion to the subtle yet powerful political statements, the pole dancing, Shakira’s viral moment, the surprise performances from Bad Bunny and J Balvin, to the powerful homage to Latino culture on a global stage—there was a lot to unpack when it came to this year’s halftime show.

There were also a lot of people who found J. Lo and Shakira’s performance over-sexualized and far from being family-friendly.

But J.Lo said she just wanted to portray that “women are on top of the world right now.”

On Friday, Feb. 7 the Hustlers actress made an appearance on The Tonight Show Starring Jimmy Fallon and gave us a play-by-play of her Super Bowl performance, including behind-the-scenes details, that amazing performance from her daughter Emme Maribel Muñiz and how she got ready for the show the morning of.

The “Jenny from The Block” singer even got a teary-eyed while reflecting what the performance meant to her overall.

Talking to Jimmy Fallon about her performance, J. Lo called that moment when she performed “Waiting For Tonight” on the pole a “nod to Hustlers.”

“I learned some pole things, let me see what I can do,” she added. “We can put it in there. But I just felt, again… it was a very powerful move. It was like, ‘Look ma, no hands!'”

The 50-year-old singer also shared that her daughter has the “performance gene” and how happy she was to perform alongside her 11-year-old. “She doesn’t let it in her mind how big [the performance] is or how it scares you. That’s what you have to do when you’re up there, you know— you kind of have to [have] control. She has that gene, that gene of ‘I’m comfortable up here…’ I wish I felt more like her,” J. Lo said. “She has a good time with it and I would never make her do it if it ever made her uncomfortable in any way.”

After playing a clip from the mother-daughter duo’s performance, Fallon tells the singer, “you can’t stop being legendary! That was iconic.”

J. Lo adds, “I got emotional because we did, we worked so hard. We started rehearsing in November for my set. It was just, every single day… it’s a short amount of time. You know what I mean, but so much goes into that moment. But it’s hundreds of people, they put that stage together in seven minutes and then you get on it, and you rock. It’s just crazy. It is such a big deal. And I’m just glad everybody liked it! That’s why I got emotional.”

Last weekend, ahead of the Super Bowl halftime show performance on Sunday, E!’s Jason Kennedy caught up with Alex Rodriguez to chat about what his beau’s performance meant for women watching everywhere.

“An enormous moment,” Rodriguez told E! News. “First of all, with 60 million Latinos in the United States, it’s amazing. Representing all the Latino women, it’s really empowering… it’s about equality. It’s about so much. But it’s just inspiration because I know she inspires all of us and tonight will be no different.”