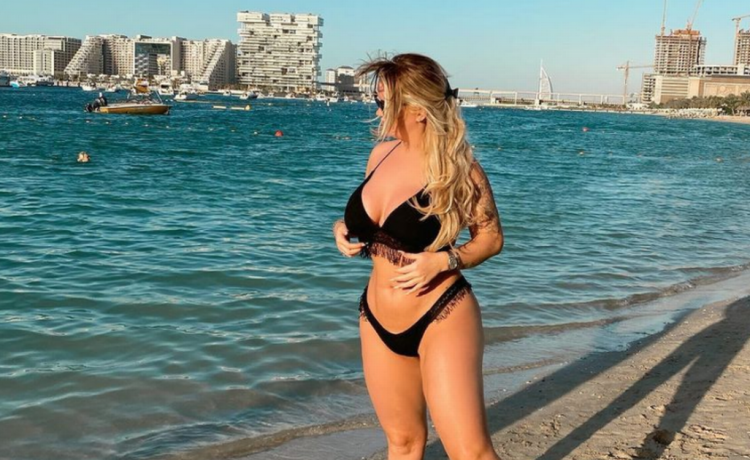 Scots lotto winner Jane has been in the United Arab Emirates since November last year.

The 24-year-old is among droves of Scots social media stars, including Love Island’s Anton Danyluk, who’ve been berated for sharing snaps from the bars, restaurants and pool parties while fellow Brits are stuck in a national lockdown.

But Katie, 45, praised influencers for ‘wanting to have some fun’ and sympathised with them as being treated like ‘red meat’.

Jane, who hails from Edinburgh, shared a clip of Katie’s social media rant on her own Instagram on Saturday and said the former businesswoman was ‘spot on’.

The Scot claimed she had fallen victim to ‘abuse’ after posting pictures from the party paradise.

She captioned a screen shot of the controversial clip: “Not a fan of hers but that is spot on.

“I uploaded a pic yesterday and constantly got comments of abuse.”

Katie posed in front of a Union Jack to jump to the defence of influencers on Friday.

She said: “Everyone says they’re stupid, they’re selfish, look at them by the pool, as they’re there for anyone’s mental health.”

“And of course I agree with you.

“They’re there because they want to have some fun.

“But you know, just because it’s s**t here, doesn’t mean that other people can’t be having fun.

“It doesn’t make it any better for us to be b******g about the fact they they’re having a bit of a laugh while we’re stuck here in s***sville because the potato with a wig who doesn’t know what he’s doing.

“So try and resist the pile on.

“Just be glad some people somewhere are having fun.”

The former Apprentice star was accused of ‘attacking victims of Child Sex Exploitation’ in the Change.Org site.