Jamie Oliver has said his first cookbook was made out of recipes written on the ‘back of fag packs and beer mats’ left in a bin bag.

The TV chef and restaurateur, 46, said if he ‘was a horse in a race, you would never have put a bet on me’, as he spoke ahead of the launch of his new TV show next week.

Jamie will oversee a group of aspiring cookbook authors for The Great Cookbook Challenge with Jamie Oliver as they try to win a book deal.

The Channel 4 show has caused him to look back on his own beginnings, before his first of a staggering 25 cookbooks was released.

He told Radio Times: ‘I was a special needs kid from school and I never thought I’d write a book.’

Jamie’s breakthrough came with the BBC series, The Naked Chef, in 1999, but he was told: ‘Oh, it’s a shame. Normally, we do a cookbook with a series.’

He added: ‘I said, “I’ve got one. I’ve written down all my recipes for the last five years and they’re in a bin liner.”’

The TV star said there were ‘hundreds’ of recipes in the bag written ‘on the back of fag packs, beer mats and order checks’.

After signing the book deal, he said he set about learning about the publishing industry – even living in the Penguin offices and personally dressing bookshop windows to promote his cookbooks.

Jamie went on to become a household name and has campaigned for better food standards in schools and his Food Revolution campaign fights for children’s rights to nutritious foods, with the aim of cutting child obesity in half by 2030.

Despite his successes, Jamie still thanks his own inspirations, including Marco Pierre White – with whom he said he does not get on – and Delia Smith.

He’s also grounded by his nearest and dearest, admitting last year that his youngest son River, five, branded his food ‘disgusting’ during his lockdown TV series Keep Cooking and Carry On, which ‘nearly broke me twice’.

The chef revealed the first cookbook he was given was written by Smith.

He shared: ‘She knew there’s a logic between simplicity, accessibility and aspiration.

‘You have to have the balance right.’


MORE : Only Connect: Data Wizards crowned champions as they take home the trophy in nail-biting final 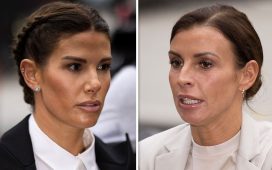