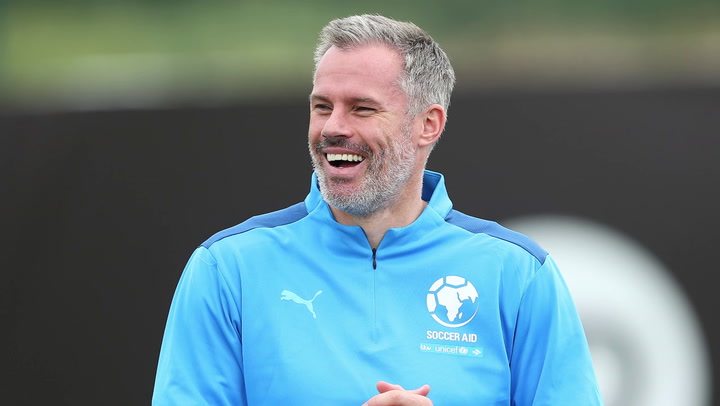 Jamie Carragher has hit back at a fan who quizzed him on his lack of Premier League titles.

The former Liverpool defender is now giving his opinion as a pundit on Sky Sports, often alongside Gary Neville.

During his playing carrer Carragher won every honour going – except for England’s top flight.

Now it is used a stick to beat him with, especially when he questions the credentials of clubs aiming for the summit of the Premier League.

One fan asked him on Twitter how many top flight medals he had, but Carragher was quick to reply saying: “The same amount of CL’s Cantona has.”

The Manchester United legend was seen as a catalyst at Old Trafford as they went on to dominate in the early 1990s.

Have Your Say! Who will win the Premier League this year? Tell us your prediction here.

Signed by Sir Alex Ferguson from Leeds, the Frenchman was hugely influential before leaving in 1997.

That meant he missed out on the treble win of 1999, which included a late Champions League win over Bayern Munich.

Liverpool came from 3-0 down to see off AC Milan on penalties back in 2005.

“He’s never done it. He doesn’t know what it means, he doesn’t know how to do it, he’s never navigated a team through it to that point to win a league.

“So I find it very difficult when he speaks with such conviction about winning leagues. He should stick to cup competitions. The moment he talks about leagues, I just mute it.”

The closest Carragher came to winning the league was second – a position he finished in twice.

Those near misses were undone by poor recruitment with the former Red citing that as a major issue.

“It’s well documented that we didn’t win a league title during my time at the club, so I think a lot of managers will look back at signings that didn’t quite get Liverpool over the line when I played,” he told Sky Sports previously.

“With Gerard Houllier and Rafa Benitez, we got so close to the title, and then we’d think we are one or two signings away, and those singings never quite worked.

“I always think of the effect of what [Virgil] Van Dijk has had at Liverpool, Mo Salah or Alisson — Jurgen Klopp had got the team so close, a Champions League final and then so close with City in the title race, but he needed those signings to get him over the line, and they worked.”