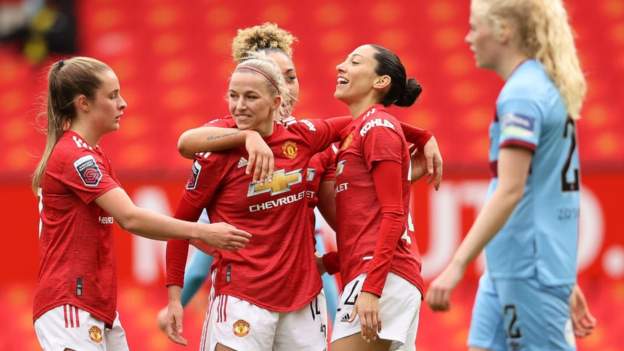 James, 19, rose to flick home Maria Thorisdottir’s header from a corner to make it 1-0 just after the break.

USA forward Christen Press thumped in a second after she was slipped through by Jackie Groenen six minutes later.

United, who usually play at Leigh Sports Village, sit third in the table.

James, one of England’s most promising youngsters, was excellent in the first half and was rewarded for her fine performance when she became the first woman to score at Old Trafford just five minutes after the restart.

She has now scored the first goal for Manchester United women in the Championship, the WSL, the FA Cup and now at Old Trafford.

James showed skill, intelligence and pace throughout, coming close again in the second half when her curling strike flew inches past the right post.

Before her opener, the hosts were struggling to break down West Ham, who remain bottom of the table and without a win in seven WSL matches.

Press had opportunities to score and twice fizzed balls across the six-yard area which evaded James and midfielder Ella Toone.

Sloppiness in possession almost proved costly for the hosts too as West Ham’s Martha Thomas, Kenza Dali and Dagny Brynjarsdottir all had chances to get in behind the home defence in the first half after being gifted the ball.

The Hammers were made to pay for not taking their chances though as James and Press provided the clinical edge Manchester United had craved, before Laura Vetterlein’s second yellow card made life even harder for the visitors in the final stages.

The result leaves Casey Stoney’s side six points above Arsenal, who take on north London rivals Spurs at the Tottenham Hotspur Stadium later on Saturday (15:30 GMT).

READ  IOC, Tokyo 2020 set for showdown talks over marathon
Share on FacebookShare on TwitterShare on PinterestShare on Reddit
newsgrooveMarch 27, 2021