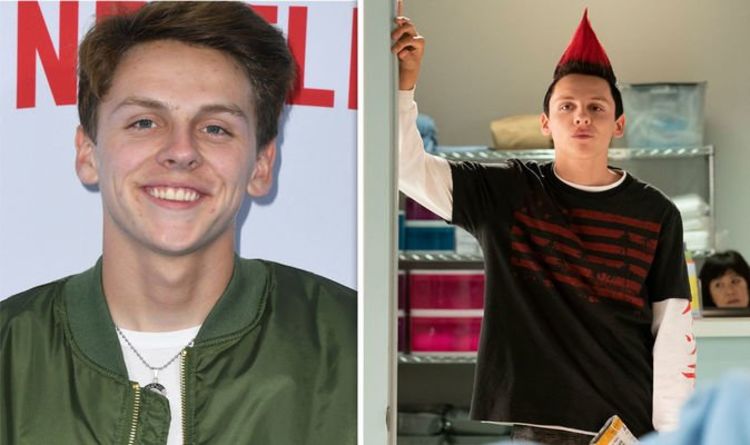 Jacob Bertrand began his acting career starring in the 2009 film, Duress. One of his most recent roles was in Netflix‘s Cobra Kai – a spin-off series to The Karate Kid. Fans are keen to know Bertrand’s height, and Express.co.uk has all the details.

How tall is Jacob Bertrand?

Bertrand is known for playing Hawk in Cobra Kai, and as his name suggests, he sports an impressive mohawk hairstyle.

The character has donned both blue and red hair throughout the series, and it has definitely added a few inches onto his height.

Fans have been keen to find out what the star looks like without the crazy hairstyle, and they are especially interested in his height.

Eli has become one of the best-loved characters in Cobra Kai, having been bumped up from a recurring role in season one to a main role from season two onwards.

He is expected to sit somewhere in the middle, meaning he is a little shorter than his co-star William Zabka, who is believed to be 5ft 11 (180.3 cm).

He is of a similar height to his other co-stars Ralph Macchio and Xolo Maridueña, who are both about 5ft 9 inches tall.

In Cobra Kai, his hair has probably added an extra foot because of its impressive height.

In May 2020 the star spoke to Red Carpet News TV about his hair, and he said the look included all of his real hair.

He said: “It’s all my real hair, at the end of the season I cut my hair really short as it’s all just dead, bleached hair.

“I just grow it out, like right now it’s just growing, waiting for season three. So yeah, I get the buzzed sides, bleach on top, then it goes black and whatever colour it’s going to be for the third season.

“It takes a while to set up, it takes a good 30 minutes to an hour depending on how fast we go.”

Fans have since become obsessed with his character’s hair, and they have taken bets on what colour it will be next.

One fan said: “I like the idea of him keeping the red mohawk until he starts to redeem himself, in which his mohawk will start to change to stuff like purple and green, etc [sic].”

Some fans believe his hair colour changes with his personality, with red suggesting his character has turned dark.

They agree he looks very different in real life, and many could not believe the mohawk was created using his own locks.

Hopefully the star will feature in the upcoming season four, which is already in the making.

As well as his roles in Cobra Kai, the young actor has featured in Kirby Buckets, Marvin Marvin and Bubble Guppies.

With regards to film roles, he starred in Ready Player One and Rise of the Guardians.

Fans have taken to Twitter to share their thoughts on the star’s role in Cobra Kai, with one saying: “Just finished watching Cobra Kai, we can all agree that Hawk is the best character right? Right.”

Hawk went through a redemption arc in season three and he transformed from a bully into a student with a conscience.

In the third season, he started to realise how Kreese (Martin Kove) was dangerous and he felt conflicted about what he had done.

Fans are curious to find out whether he continues to transform into a protagonist in season four.

Cobra Kai is on Netflix now