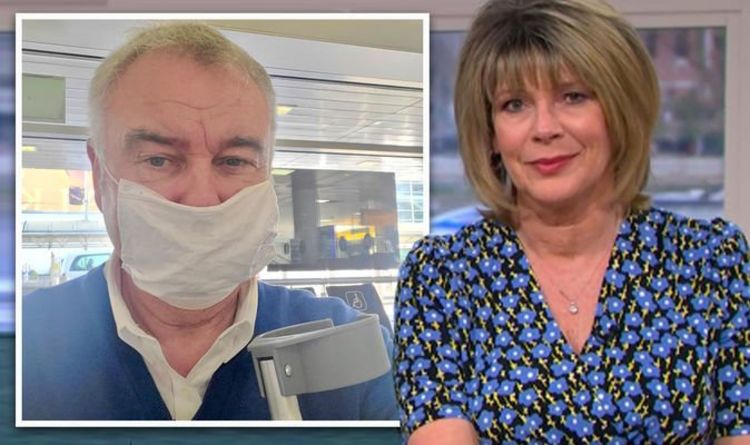 This Morning and Loose Women star Ruth Langsford has given an update on her husband Eamonn Holmes‘ health this week. The 61-year-old presenter said that her spouse was “OK” but that his recovery was a “slow process”.

Earlier in the year, Eamonn revealed that he suffering with chronic pain which was affecting his sleep.

He did not know the cause at first, but later discovered that he had a dislocated pelvis and three slipped discs.

Ruth has since said it was hard to see her husband, who is also 61, suffer in pain and be unable to help.

The father-of-four is having physiotherapy to deal with the condition.

READ MORE: Ulrika Jonsson sparks meltdown as she strips off for charity

The TV star had previously been seen using a walking stick to get around the This Morning studio during stints on the show.

Ruth had to host a segment on her own, explaining that it was taking her husband longer to get around.

During a feature on chronic pain, Ruth told viewers: “It’s ironic now that he is not here, because he’s had to nip to the loo, because it takes him so long walking and he is on his way back.

“It takes him longer to walk, but he is here now,” she said.

The couple, who have been married for over a decade, are set to return to This Morning this summer to host.

Ruth and Eamonn will front the daytime show for seven weeks during the school holidays, taking over from regular presenters Holly Willoughby and Phillip Schofield.

It comes months after they were replaced by Alison Hammond and Dermot O’Leary on their Friday slot.

Ruth told the publication that she was looking forward to it.