NewsGroove Uk
NewsGroove Uk > Movies > Isla Fisher on how she mastered a posh English accent for Blithe Spirit, and why she doesn’t mind being called Bride of Borat
Movies 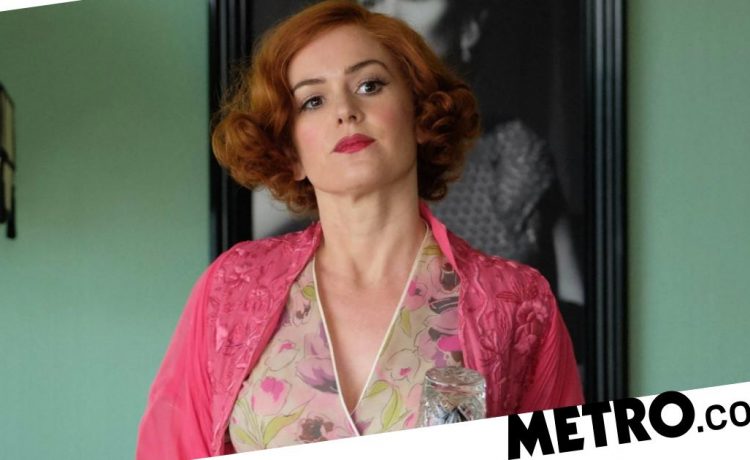 ‘Bride of Borat’. That’s how US Talk show Jimmy Kimmel recently introduced Isla Fisher in a TV interview that was then dominated by questions about her comedian/ actor husband, Sacha Baron Cohen.

As a successful comic actress in her own right, doesn’t that ever nark her off?

‘It sort of depends what’s going on,’ the Wedding Crashers star admits. ‘At that time, Borat 2 was like the biggest streaming movie ever on Amazon, so I don’t begrudge a journalist asking about it.’

It’s hard to imagine Fisher begrudging much. She’s called me today to chat about Blithe Spirit, a new Sky Cinema remake of Noel Coward’s sparkling comedy that she calls ‘a bit of fun’ and ‘just the tonic we need right now’. The same could be said about Isla herself.

I’d worried the 44-year-old red head would be guarded. In advance of our interview I’ve been told not ask about ‘the kiddoes – my little lovebugs’, as Fisher adoringly describes her three children (aged 13, 10 and 5), or even her location (Sydney, according to recent MailOnline pictures).

Which Fisher then rather gives away in the first seconds of our late night call by telling me it’s 9am where she is and cheerily confessing she’s still in her pajamas.

A self-confessed Pollyanna, Fisher is a glass full kind of gal. ‘I like to see life with rose-coloured glasses.’

And whether it’s Trump’s toxic America or the COVID pandemic that’s triggered the apparent relocation of her family from LA to Australia, she will likely view it as a blessed homecoming.

Born in Oman, to Scottish parents, Fisher moved to Oz, aged six. A budding actress, she did her time on Home And Away before meeting Baron Cohen at a party in 2002 and swishing off to Hollywood.

As such she’s adept at accents, but Blithe Spirit presented her toughest challenge yet. ‘As an Aussie doing a posh British accent whilst still trying to access the emotional life of the character was a nerve-wracking experience. Terrifying!’

‘Every day I spent an hour in my trailer just warming up my jaw because Australian comes from really far in the back of the throat and you open your mouth quite wide, but with the English accent you push your lips forward and your tongue comes right out to the tip of your teeth.’

To crack 1930s posho-speak she studied Downton Abbey. ‘I watched some ahead of the shoot then got hooked like everyone else and went completely down the rabbit hole and became obsessed.’

Her greatest compliment came when Downton’s Dan Stevens, who plays her husband in Blithe Spirit, assured her that her dialect was ‘fine’. ‘It meant a lot as he comes from that world an I have come from Summer Bay.’

Much more impressively, she nailed Coward’s tricky comic timing. And if some of the spookier goings on during the shoot – doors mysteriously swinging open, power flickering on and off – led some to believe that Coward’s ghost was haunting the set, he was surely pleased as punch with Fisher’s performance.

She is, of course, a writer herself. Her bestselling Marge At Large children’s series is currently being made into a Nickelodeon series and she’s now working on another kids’ book ‘in honour of our late dog – without getting depressing.’

Even so, she insists, with what one suspects is typical modesty, that ‘I am not a writer. I just do it for fun. I don’t graft at it for my living.’

All about spreading the joy, Fisher likes to wear life lightly. A gift we could all do with right now. I ask if she will leave Metro with her favourite joke. Most comics hate being put on the spot with that one, but Fisher bounces up to the plate.

‘What do you call a teacher that farts a lot? A private toot-er!’ she guffaws. ‘It’s so stupid, but I do love puerile humour and it always makes my family laugh.’

Blithe Spirit is out now on Sky Cinema.


MORE : Andie MacDowell really wants to go skinny dipping once the pandemic is over because why not?


MORE : Love Island star Lucie Donlan urges people to ‘move on’ as she gets ‘death threats’ in wake of Yewande Biala row