Is The Sacred Riana Britain’s Got Talent’s most terrifying act? Amanda Holden is left disturbed by the illusionist

IS it any wonder scared is an anagram of sacred as Sacred Riana gives people the heebie-jeebies across the globe?

She’s starred in America’s Got Talent as well as its Asian counterpart, and now it’s time for us Brits to get a fright as she performs on Britain’s Got Talent: The Champions TONIGHT. Here’s more about the terrifying illusionist…

Who is The Sacred Riana?

The Sacred Riana is an Indonesian magician and illusionist.

She was born as Marie Antoinette Riana Graharani on July 13, 1992, in Jakarta.

The artist went to St Ursula Catholic School and the University of Buna Mulia before dedicating herself to her art.

Riana’s look is based on The Ring, while her doll that she carries is similar to that of Annabelle from The Conjuring.

Within her act, the illusionist is defined by her distinctive appearance and head and hand twitches.

She also always keeps a static facial expression and stands with one of her legs bent, as well as her long hair obscuring the majority of her face.

You probably know her from BGT, but what else has Amanda Holden done?

in it to win it

Who will win Britain’s Got Talent: The Champions – latest odds

What time does Britain’s Got Talent: The Champions start tonight?

CHAMPING AT THE BIT

Full line-up for Britain’s Got Talent: The Champions TONIGHT

The sacred part of her name was added by her and her manager to reflect their belief that magic is a sacred thing.

When was The Sacred Riana last on Asia’s Got Talent?

In 2017 The Sacred Riana competed in the second series of Asia’s Got Talent.

She edged out Filipino hip-hop dance act DM-X Comvalenoz to be crowned champion in the grand final.

But it wasn’t her first taste of TV fame as she had already won Stand Up Magic Indonesia in 2012.

She also appeared in a host of other talent shows in the continent.

And on August 31, The Sacred Riana will take to the BGT: The Champions stage with another terrifying performance where she targets judge Amanda Holden in the suspense-ridden act.

What has The Sacred Riana done since winning Asia’s Got Talent?

Since winning Asia’s Got Talent, The Sacred Riana turned her attention to a more international stage.

In 2018, she competed in America’s Got Talent, making it through to the quarter finals.

On August 21, 2018, during the quarter-finals live show, her act went dark and cut to an ad break very abruptly.

Many took to Twitter to query what had happened but it transpired that the shocking halt was actually pre-planned and part of the performance.

How scary is The Sacred Riana?

Very – The Sacred Riana has scared people on all sides of the globe.

The performer truly commits to her creepy act – always leaving the audience with the hairs’ pricked up on the back of their necks.

America’s Got Talent judge Mel B was left terrified when she was singled out to participate in her act.

And Amanda Holden too was less than thrilled to be asked to help out during her performance.

When is Britain’s Got Talent: The Champions on TV?

The series will run for six weeks, with the show likely to end on October 5, 2019.

Constants and judges filmed the final at Wembley Arena at the end of July and accidentally revealed the winner.

The act  who won the contest showed off their trophy outside the arena after the grand finale was shot.

However, we will not spoil it for you by revealing their identity but if you do care to know who won the show, a simple Twitter search will bring up the answer in no time.

She-Ra: In Defense of Entrapta 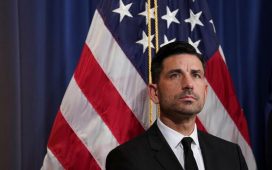