The recent video game adaptation of everybody’s favorite super-fast critter, Sonic the Hedgehog, has been doing very well both critically and commercially, even breaking several box office records. Of course, as is usually the case, with success comes the inevitable discussion of a sequel and with each sequel needing to be bigger and better than it’s predecessor the pressure is on for Sonic the Hedgehog 2. One way to improve on a movie’s formula is to add a nice, big addition of Dwayne “The Rock” Johnson and his behemoth charm, which is exactly what star Neal McDonough has heard may happen.

“I’m looking forward to part two. Literally, part two, I’ve already heard rumblings that The Rock is going to be [in it]. The Rock is in part two of everything, by the way.”

Now, though he may have said this with his tongue firmly in his cheek, this is not beyond the realms of possibility. Dwayne Johnson has already shared his interest in the Sega property, having had a run-in with the Sonic the Hedgehog director on social media following Johnson receiving a shout out in a trailer showing a bewildered Sonic asking, “Where am I? What year is it? Is The Rock president?”

Johnson then responded to the Sonic the Hedgehog shout-out on social media, where he declared his love for the character and his feelings towards being name-dropped by the spiky, blue speedster.

“So crazy I used to love playing Sonic in college. Many moons later this… life can be so damn wildly unpredictable and surreal at times.”

Director Jeff Fowler then suggested that Johnson clear some time in his busy schedule for a quick cameo.

Sadly, the cameo did not end up happening, but the seeds have clearly been sown. Fans of Sonic the Hegdehog fully embraced the idea of seeing The Rock join the fray, with suggestions flooding in as to how he could be added in the sequel. These included him appearing as President, or voicing fan-favorite character Knuckles the Echidna.

If Johnson has any doubts about signing up for Sonic the Hedgehog 2, he should listen to the words of McDonough who puts the success of the first movie down to it simply being a great family adventure.

“There was a little something for everyone – there were adult jokes that would sneak in there that we’d get, and the kids wouldn’t get, [and] there would be jokes that the kids would be getting that we as adults generally wouldn’t necessarily get – so it was a little bit for everyone,” he said. “And I think what they did with Sonic, he looked so great, it was a throwback to what the game was and I think they really nailed it. I think that’s why it’s the number one movie on the planet right now.”

Here’s hoping that Johnson is paying attention. McDonough made these comments at Fan Expo Vancouver.

The Batman Nods to Bruce Wayne's Backstory, But Is Not an Origin Movie

Universal Studios To Remain Closed Through May

Star Wars The Phantom Menace paid homage by The Mandalorian episode 5 – Did you spot it?

Why Batman: Last Knight on Earth Is “The Last Batman Story” 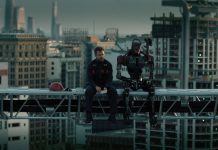 Netflix UK: Everything arriving in April 2020